Kevin Gibbs, a partially-sighted Sibelius user, had been working with the Avid development team on getting Sibelius 7.5 to work better with NVDA, a screen reader for sight-impaired users in Windows. He told me that they had no way for sight-impaired users to navigate to system objects like titles, rehearsal marks and special barlines, and wondered if a plug-in could be written to help with this. I ended up writing three plug-ins, which are available in a new “Sight-impaired” category on the download page.

This was the first plug-in I wrote for this project. It displayed a list of all the categories of system objects in the score, and a second list of the objects of that category present in the score. The user could arrow down the list of categories (which the screen reader would read) until finding the desired category (such as system text). At this point the second list would fill with descriptions of the system text objects in the score, with the bar number, style and other information that would allow a user to choose a specific item. Choosing OK would cause the dialog to close, and Sibelius would select the chosen object and bring it onscreen.

Kevin asked on the tech support forum if there was a way to navigate among the staves of a score with many staves. The Sibelius 7.5 Timeline does a nice job of that, but it was not accessible to the screen reader, and I offered to write another plug-in.

I realized that while it would be best to just be able to go up and down vertically without moving the score horizontally, a plug-in has no way to do that – it does not know what part of the score is currently onscreen. It can, however, tell where a selection starts and ends, and it can move to a specific bar. I set up a list of staves in the score and also added a bar number edit box, which defaulted to the first bar in the selection.

The user could choose a staff, and either accept the default bar number or type in a different number, and the plug-in would select the first note or rest in the bar when the user hit OK. 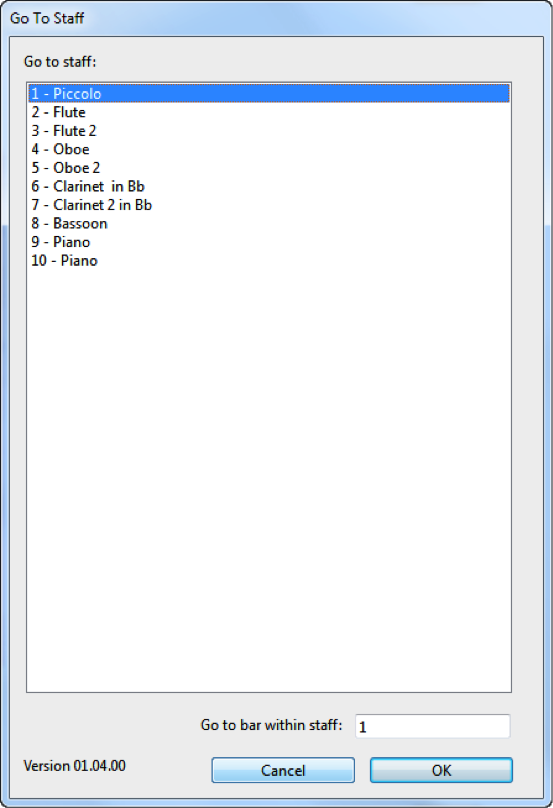 Thinking about how the Timeline has a great two-dimensional grid where you could just click in a staff/bar combination and Sibelius will go there, I realized that if you have two lists, a list of staves and another list of bar numbers, you could navigate to a staff/bar location in two clicks, which was almost as efficient as the Timeline. I showed this to Kevin, and he thought that the edit box would actually be easier for sight-impaired users. I agreed, but still liked the two-list version, so I named it Go To Staff and Bar and put it on the plug-in download page in the Navigation category, separate from the sight-impaired plug-ins.

Kevin told me there was no way for a the initial key signatures and clefs on a score to be read by the screen reader, so I wrote a plug-in to display the key signature and clef at the start of each staff. I had only recently figured out how to display transposed key signatures (ManuScript only provides the untransposed signatures), so I was able to display whether the score was transposing or concert pitch, and whether all staves had the same key signature, to save a sight-impaired user having to look through every staff to find that out.

I wrote out the information to the plug-in trace window, but unfortunately, the screen reader could not read that, so I changed the plug-in to put the information into a list box (which could be read), and added a Trace button that could write the list to the trace window so a user could copy and paste it into Wordpad, or some other application accessible to the screen reader: 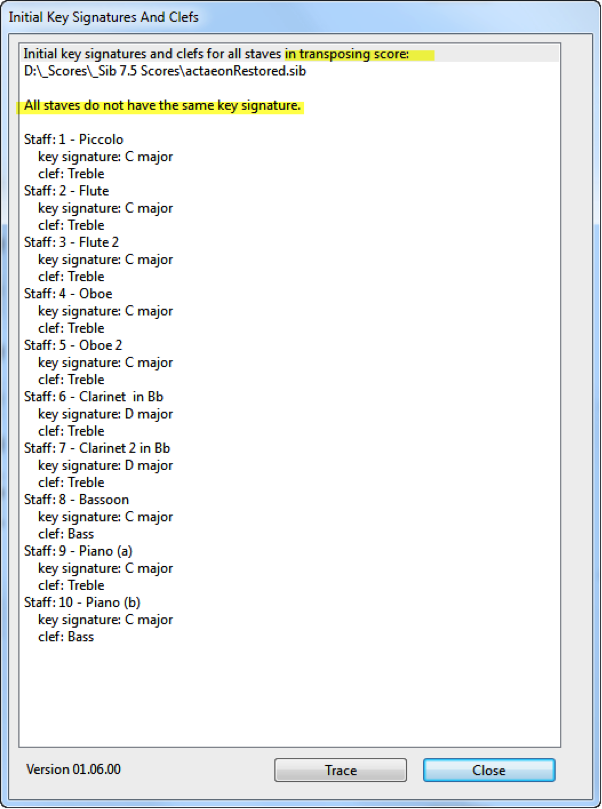 All of these plug-ins may be downloaded directly through Sibelius 7 or 7.5 at File > Plug-ins > Install Plug-ins. Users may also install these manually in Sibelius 6, 7 or 7.5 by visiting the appropriate plug-in download page for each plug-in and following the usual manual installation procedure, or by using the Install New Plug-in plug-in.