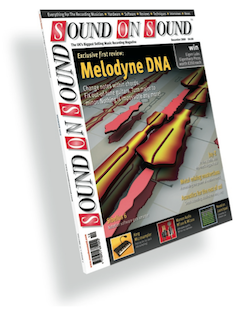 After we release a new version of Sibelius, the review I most look forward to seeing is the one in Sound on Sound magazine. Their reviews are always comprehensive, fair and balanced, which is why it’s customary to wait several months after the release for the review to appear: Sound on Sound’s editorial team want their reviewers to actually use the products they are reviewing, so that they can talk with authority about them.

The December 2009 issue of Sound on Sound features a typically in-depth review of Sibelius 6, and I’m delighted to say that reviewer Mark Wherry loves the new version. He says:

Sibelius 6 is an incredible update to a program that was already pretty incredible. In many ways, it’s a more significant update than Sibelius 5, especially with workflow enhancements like Versions, and it also feels a little more refined.

Some other extracts from the review after the jump.

Mark opens his review by discussing Versions, and concludes:

“What makes Versions indispensable is the way Sibelius can track edits made to your score.”
“The Versions feature is the kind of elegant solution one would expect from Sibelius. It’s well thought‐out and easy to use once you’ve taken a few moments to adjust your normal working approach.”

The Versions feature is the kind of elegant solution one would expect from Sibelius. It’s well thought‐out and easy to use once you’ve taken a few moments to adjust your normal working approach.

He says that Magnetic Layout continues to give satisfaction:

As you change the pitch of the note, Sibelius will automatically adjust the vertical position of the lyrics to avoid the collision on the affected system. This is incredibly useful, and I find myself unable to stop smiling every time I see Magnetic Layout at work.

To suggest that the new Magnetic Layout feature is helpful would be an understatement. It’s unbelievably helpful, and is one of those typical Sibelius features that you’ll wonder how you ever lived without.

Live Tempo is “yet another fabulous addition”:

If you’ve ever fancied yourself as Toscanini, Sibelius 6’s new Live Tempo feature will be right up your podium.

As with the real art of conducting, it takes practice to hone your skills, but the process works surprisingly well… It makes the playback of scores sound far more natural, but it’s also useful for trying out different interpretation ideas while you’re composing.

Mark concludes that there are too many new features in Sibelius 6 even to discuss in a six-page review, and says:

Sibelius is one of those applications that always seems to do everything you need. Except that, after a new version is released, you always end up with a variety of new features that you now simply couldn’t imagine living without!

If you’re an existing Sibelius user, there’s isn’t one good reason to upgrade — there’s probably about a hundred.