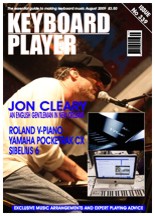 I’m delighted to say that the review is very positive, with Andrew concluding:

There’s no doubt in my mind that Sibelius 6 is an absolute winner… If you have a previous version, you’d be crazy not to upgrade, the benefits are huge this time. If you currently use another notation package and are coming up to a yearly update, why not download the Sibelius 6 demo and compare them side by side before committing yourself. If you’re a newbie, trying to decide which of the notation packages to go for, download the demo and just be amazed. I don’t think you’ll find anything better.

A few more highlights from the review after the jump.

It’s always a pleasure to read a review where the reviewer has really taken the time to use the software and dig into many of the improvements in a lot of detail. Andrew even takes the time to explain what you get in the box, and the installation process (which he concludes is “simple and painless”). Andrew was unfortunately struck down by a common problem that afflicts users of Sibelius 5 and later on Windows, where other applications that hook into system processes (typically things like virus checkers and desktop search applications) can interfere with the loading of Sibelius itself. Fortunately this problem has a simple solution, but it’s regrettable that we had to come up with such a solution in the first place.

[Sibelius 6’s “killer feature” is] called Magnetic Layout and it’s very clever… Sibelius has automatically adjusted everything. Brilliant! In fact, whatever you do, Sibelius will gently nudge, push and pull things around so that everything looks good.

He decided to test our claim — which came directly from users who beta tested Sibelius 6 — that Magnetic Layout can save up to 50 per cent of the time it takes to create a score:

I didn’t actually have a stopwatch running so I can’t attest to that 50 per cent figure, but I did spend much less time on the Sibelius 6 version, which required almost no manual intervention… In short, Magnetic Layout is going to be worth a fortune in time for some users. For me, and I’ve no doubt many, many others, it would easily justify the upgrade cost on its own.

Sibelius can even export details of the changes that you’ve made into a Word file that you can edit and print out or email. That’s going to be very handy in that educational scenario I envisaged. When the teacher asks the student what he’s done to the composition that week, he can have it all in black and white without the student forgetting a thing. I wish I’d had that when I was a youngster!

There’s some appreciation for the improvements made to setting up playback and the integration of the new Sibelius Player:

The quality is going to be more than acceptable for most of us, who really only need to hear a good approximation of what we’ve written, and I think Sibelius 6 actually exceeds that requirement by some margin.

Andrew has good things to say about some of the smaller features added in the new version, and found the arpeggio lines (“these used to be an absolute pain”), jazz articulations, and the ability to change the graphical order of any object in the score (“my teaching materials for the very young are going to take on a new and exciting look!”).

My little old blog even gets a shout-out:

There’s also a smashing webpage at www.scoringnotes.com, where you’ll find all sorts of articules and tutorials, including one that offers to teach you the basics in one hour.

If you’d like to read the review in full, you can purchase a copy of Keyboard Player to be shipped to you, or purchase a PDF download either of the whole issue or just the Sibelius 6 review.

I’m delighted to be able to share the happy news that Sibelius 6 is now available! We’re incredibly proud of...