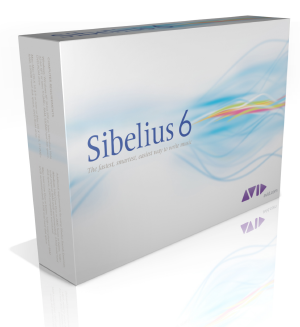 Since the launch of Sibelius 6 this past Tuesday, I’ve been delighted to see such an enthusiastic response to the new version. Here’s just a handful of the great coverage that our new baby has received so far:

From Sound on Sound:

…the main focus has been on streamlining the process of producing professional music notation. [Version tracking] has now been added to Sibelius, providing a great way of seeing what’s changed in your score or reverting back when things go a bit wrong. An especially neat new playback option is Live Tempo, which provides a clever way of allowing the user to ‘conduct’ the score in real time by tapping on a MIDI or QWERTY keyboard.

Magnetic Layout is a tool that Sibelius has been needing for years. It will save a good amount of time when preparing a score. I also like the versions tool and the classroom control tool. This will be a nice addition for educators because they can make comments to the students right on the score… These are nice upgrades for Sibelius. I cannot wait for the product to come out on the market!

Sibelius today gets the biggest upgrade I’ve seen from the tool in a long time… Scores now track and manage revisions, and you can create comments on the score. Theoretically, this is for collaboration and teaching, though I imagine it’ll be useful even to a solo composer as a score is developed – enough so that you may start to haul your laptop to rehearsals instead of just paper. [ReWire] should be huge for the composer just wanting to record a quick mock-up with virtual instruments as well as someone doing film score…

One feature may be especially revolutionary for certain user applications. Live Tempo finally allows you to tap in a conductor track so you can control tempo fluctuations manually. This is more sophisticated than the (useful) similar feature in Finale – it integrates with Sibelius’ existing fluid tempo functionality, allows subdivision of beats and other musical possibilities, and can be recorded and played back and edited by section.

I’ve been walking on clouds all morning. The reason is the release of an upgrade to Sibelius, the music notation programme. Put simply, I’m very excited by the new features and improvements.

From Chad Criswell’s Tales From The Podium:

Magnetic Layout: This one is just plain cool.

I am really looking forward to getting Sibelius 6 on my computer the minute it comes out. The new features listed above provide more than enough reason to spring for the upgrade. My favorite features for teaching music include the amazing Classroom Control feature that gives you a fantastic computer lab management tool; Versions which allows you to track your students creative process; and magnetic layers than goof-proofs your scores making them look pristine while freeing up more time for you and your students to be creative.

Well done Sibelius. I wouldn’t have expected anything less from you.

The big highlight of version 6 is a feature called Magnetic Layout. When activated, it automatically positions score objects like dynamic and rehearsal marks and lyrics, the kinds of things that in the past (and in other notation programs) you’ve had to constantly re-adjust. I saw this feature demoed and I was very impressed.

And there has been an enthusiastic reception on Twitter:

@bworcester: Wow. Sibelius 6 will save me hours!!!

@jdmayfield: Sibelius 6 has the changes that I need!

And the forum at Sibelius.com has seen its share of excitement, too:

Adrian Cleaton: The features look amazing and will make my job so much easier. I’m engraving a large score for a major UK festival in summer 2010. This way I’ll get it done in time!

David Pritchard-Blunt: I have just been salivating over the new features. There are improvements there which, along with other users, I have wished for for a long time. I am particularly pleased to see that so much effort has been put in to notation features. Along with the improved playback (playback of repeat symbols is totally awesome) this new release only reaffirms my position that Sibelius is far and away ahead of its competitors.

Paul Nauert: Wow, I’m amazed and delighted by how much attention was devoted to quality of notation in version 6. Will upgrade pronto!

Tobias Escher: *plonk* That was my jaw dropping on the floor. Magnetic Layout?! How freaking cool is this?!

Kim Bastin: There’s an extraordinary amount here that I’ve been wishing for. I’m really looking forward to trying out magnetic layout. Slurs are going to be so much easier to shape now that the default height can be changed, and multi-arc slurs look like being really practical for the first time.

Oscar Briche: I am absolutely amazed with the new features.

We haven’t even sent out the email announcement to all our existing users yet, so hopefully the fun is only just beginning. We’re delighted with the reception Sibelius 6 has received so far, and we’re really looking forward to customers getting the software in their hands!

[youtube]http://www.youtube.com/watch?v=iDOV5WE4OxM[/youtube] We’re very pleased to announce that a new version of Sibelius’s little brother, Sibelius First, is available from today,...

Hugh Smith is the author of the Sibelius 7 Sounds User Guide (an updated version of which is available for...

After we release a new version of Sibelius, the review I most look forward to seeing is the one in...