Judging from the interest in the Bravura font, the pre-release version of the font to be included with Steinberg’s new notation software, Sibelius users are eager for new ways to make their music look even more distinctive and beautiful. With the ubiquity of notation software, each program has certain “tells” that, to the relatively trained eye, identify the output as a product of this or that software. More experienced users with nothing better to do (like myself) have even been known to identify the version of the software — “oh, that’s Petrucci, Finale 98” or “those look like pre-Sibelius 6 defaults”. A frustrating existence, one that is brightened only upon the occasional discovery that a user has improved upon the out-of-the-box settings and let a little more visual creativity into their musical creation.

All joking aside, it is true that fonts can enhance the character of, and provide context to printed music, much as they can with printed text. Various third-party fonts are available for notation-software, but getting them to work properly with the software’s proprietary settings can be challenging. That’s why I was happy to learn recently of a series of fonts called the Urtext Music Fonts by Stephen Carisse, a Canadian graphic and font designer. Here is a description of these new fonts:

Urtext Music Fonts began when we sought to publish a collector’s edition of transcriptions from J.S. Bach. We could not find a commercial music font that matched the quality of the private fonts controlled by the major music publishers, so we created our first designer-quality music font: Kapellmeister, based on the classic musical typography of the historic Bach-Gesellschaft edition of Bach’s complete works. Since then we have added designs based on Baroque, Classical and 19th century musical editions, as well as modern styles. Now musicians, composers, teachers and students can create musical scores to rival those of the major publishing houses. Urtext Fonts are compatible with most scorewiters, including Sibelius™ and Finale™. All font packages contain a complete music font as well as supplementary fonts with ornaments as well as special text characters — over 275 characters in most designs. Both OTF and TTF formats are included.

There are a total of eight fonts available, and FontShop is offering these fonts for sale at $39 each. I tried out two of them: Kapellmeister II, a weightier version of the original Kapellmeister described above, and Burnside, a font inspired by U.S. Civil War-era prints. You can see the results below and comparison with the originals (click for PDF):

While not quite a carbon-copy of the originals, you can see how in each example the fonts clearly help convey the context of the original setting. Stephen informed me that my source for “The Battle Cry of Freedom” was not actually printed at the time of the Civil War, but rather was from 1901 or later: “The titling font is Blanchard, which was issued by the Inland Type Foundry in 1901,” he said. “It is the kind of grungy ‘rough and ready’ fonts that were popular for a few years around the time of the Spanish-American War. It shows how long that style of musical typography was in use.”

Here is one of the actual models Stephen used to create the Burnside font: 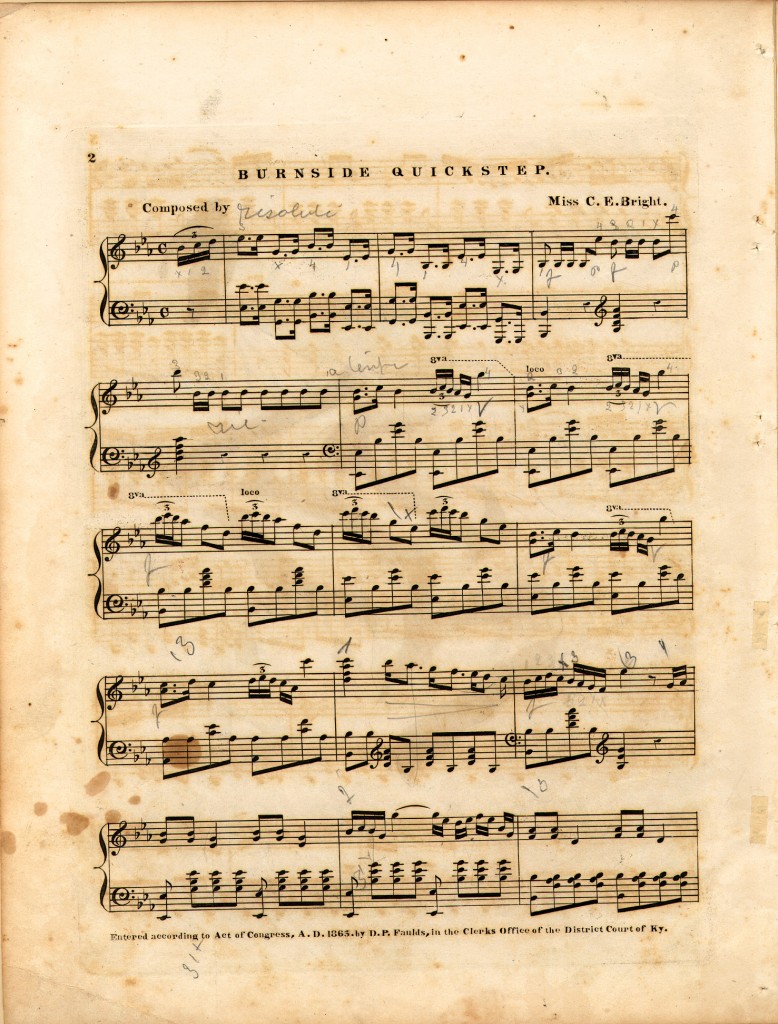 I asked Stephen about his process of designing these beautiful fonts. He said, “Originally I would take the measurements first and then try to shape the outlines to that. I’ve come to reverse the process, basically by globbing together some basic geometrical shapes and then reshaping them by eye, and only then correcting the final dimensions.”

He has developed a technique particularly suited to designing music fonts. “I use CorelDraw as I find it easier to use than Adobe Indesign,” Stephen told me. “One of my secrets:  I use the software quite differently from most designers of standard alphabet fonts. They all will create one design file per glyph, so they end up with hundreds of Corel or Adobe files for their alphabets. I design everything in the same single Corel file. Then when I’m done I can export the characters in one go to individual EPS files which can then be drag-dropped into the font program. This is much quicker, because recurrent design features can be quickly accessed by making copies from existing characters in the open file and adapting as required — kind of the way music works.”

Configuring Sibelius to work with these fonts takes a little time, but once you master the process, it is quite straightforward. Section 8.6 Music fonts in the Sibelius 7 Reference gives a thorough overview on how to do this. You first need to add the music font to Sibelius’s list of available fonts by choosing the Music Fonts page of the File > Preferences dialog: 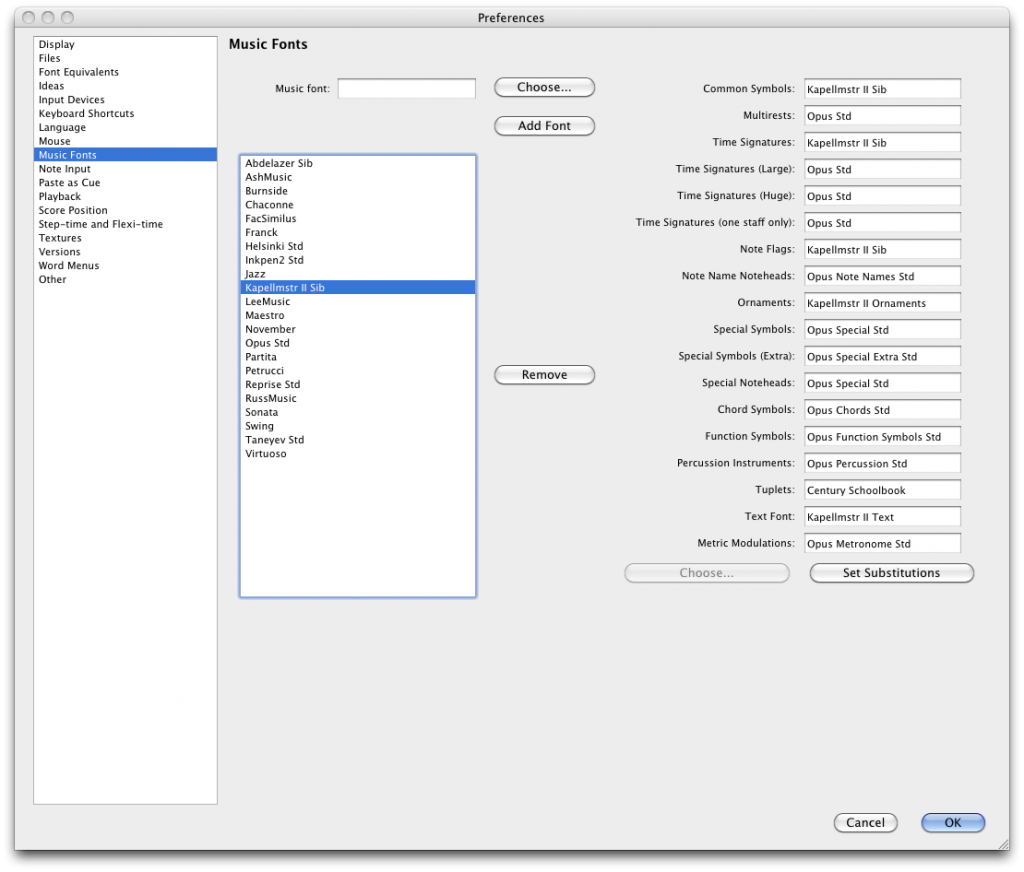 Once you’ve done that, you can change the music font in your document by click the dialog launcher button in the Text > Format group of the ribbon to launch the Edit All Fonts dialog, in which you can change the main text and music fonts used by the score, directly editing all of the appropriate text styles: 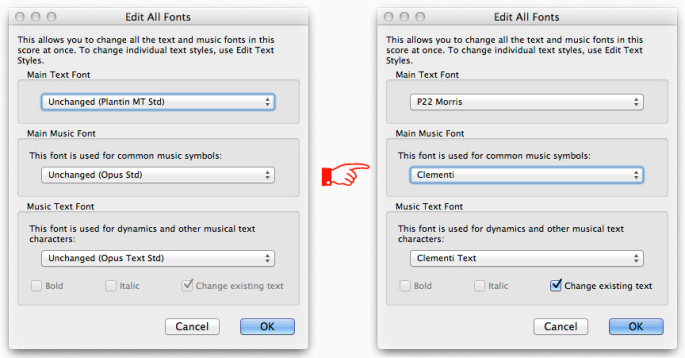 You’re not done yet. Each of the Urtext fonts will likely need some further adjusting, especially with time signature positioning and note flag position. Helpfully, a detailed guide with settings for Finale and Sibelius is included with purchase of each font. Fortunately, once you’ve made these adjustments, as well as made any other alterations such as stem and barline thickness to suit your taste, you can export the collective settings by going to Appearance > House Style > Export and use your new house style in any existing or future document.

There is an interesting post on the FontShop blog which discusses the development and potential use of these fonts in greater detail. I look forward to seeing what users can create with this bevy of new graphical possibilities!