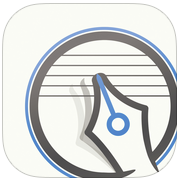 Kawai has released a promising music handwriting app for iOS. It’s called Touch Notation, and it comes on the heels of the release of StaffPad and the announcement of NotateMe 3. Touch Notation has been available in Japan for several months, and the English version was released one week ago on April 16. It runs on both iPads and iPhones, and it’s being offered at an introductory price of $8 until the end of April, after which time the app will cost $12.

Kawai has made a six-minute video demonstrating the app’s features and methods of use:

Now that there are several serious players in the music handwriting app space — an incredible development on its own — we can begin to compare them and their approaches to entering music on a touch-screen device using handwriting. On one end of the spectrum is NotateMe, which attempts to learn and adapt to your own style of handwriting. In the middle is StaffPad, which contextualizes one bar of handwritten music at a time, and, while having recommended writing styles, also allows its recognition engine to be tuned.

On the other end of the spectrum is Touch Notation, which probably should be more accurately termed a gesture-based music notation app. It is very specific in the ways that musical notes and symbols can be drawn, and in this way it is reminiscent of the Graffiti system used on Palm OS devices from nearly two decades ago. The gestures accurately resemble music notation, but there is no attempt to conform to the user’s style. As a result, the process is the least natural way of writing music of the three apps, because each gesture is immediately interpreted — you never see your own handwriting for very long at all.

Kawai understands this, and they have thankfully provided short videos for each and every type of gesture that Touch Notation recognizes. Users are well advised to review these videos before beginning to write music; each one is only several seconds long.

To that end, upon starting the app for the first time, a Quick Start guide is presented, which is also recommended reading to understand the basic operations of the app. More detailed in-app support documentation is also available, including the aforementioned gesture videos, organized by category. 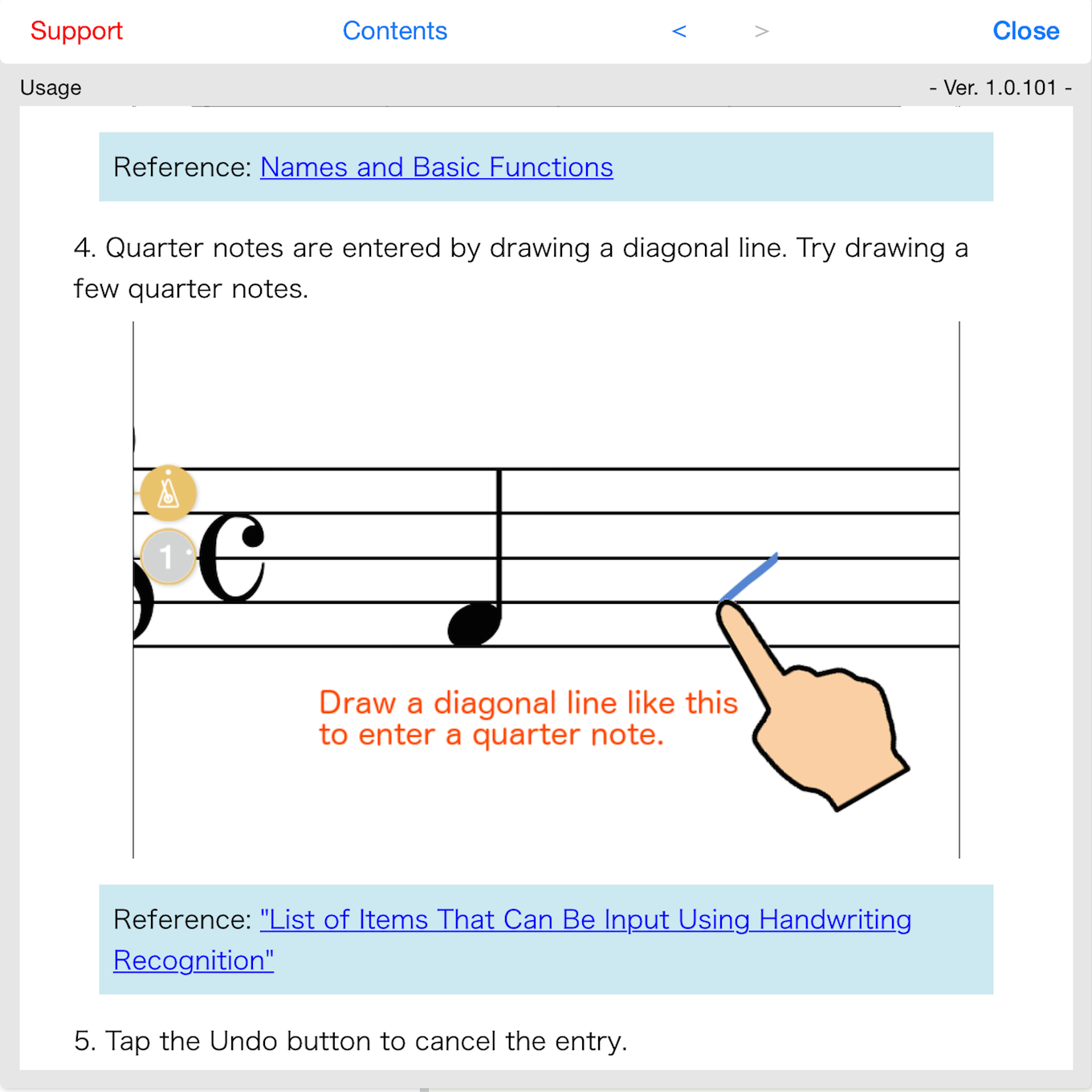 Once you’re ready to begin a score, you’re presented with a screen from which to choose the usual options of score title, tempo, key and time signatures, and either A4 or US Letter page size. You can choose from a number of pre-defined instrumentation templates. Interestingly, adding instruments is not controlled from this screen; however, you can add or delete instruments once you begin working in your score, and then save your score as a template. 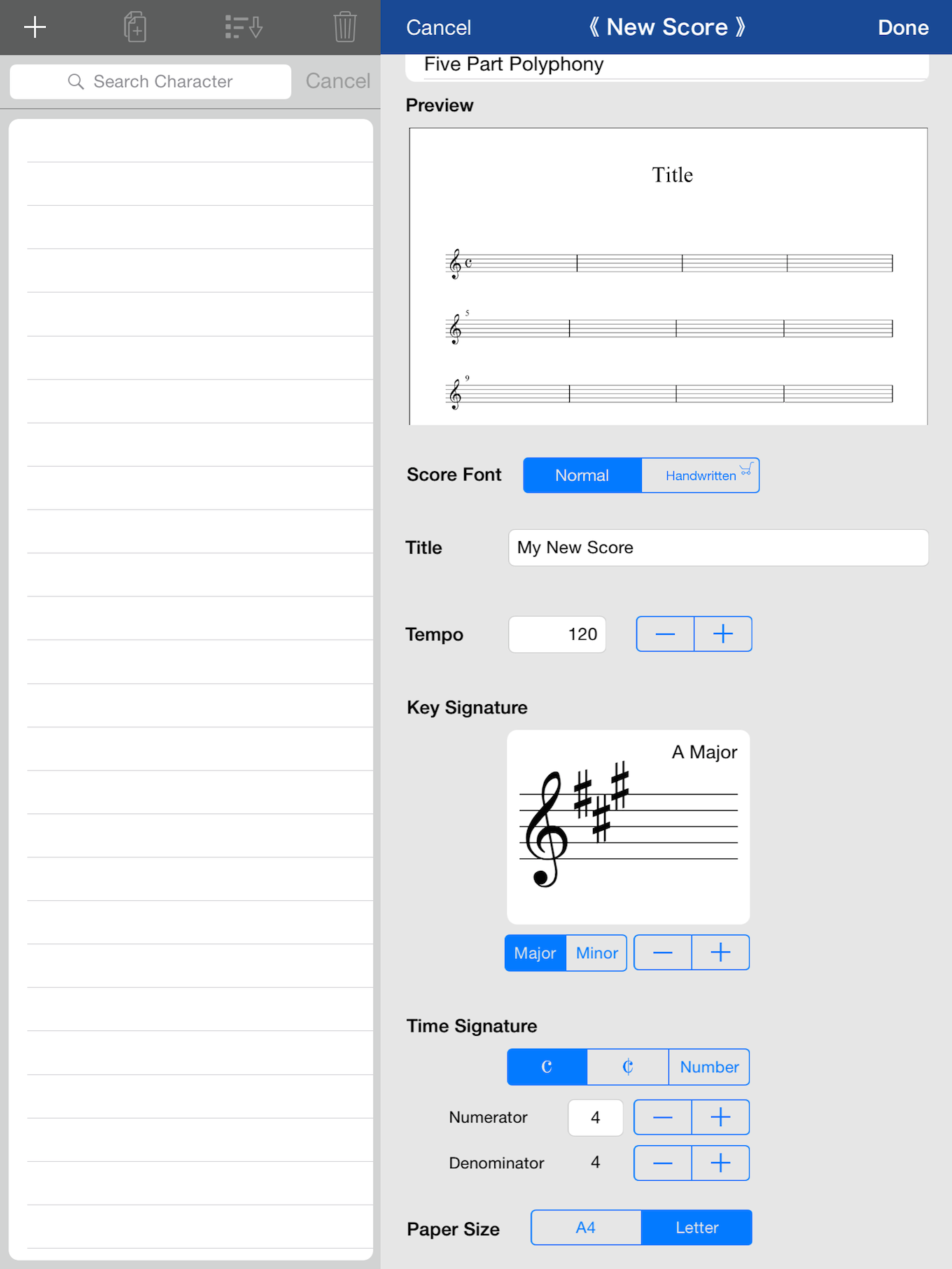 Working in the score

Once you start writing in notes, you’ll quickly want to know how to edit, move, or delete them. Touch Notation uses a few different options. NotateMe users will recognize the “lasso” method, where you can draw a circle around notes or objects to make a selection. You can also simply tap and hold an item to select it. Touch Notation turns selected items green, and then you can drag them up or down. Crosshairs appear at the origin of the selection, a blueish-grey box will indicate the destination bar, and the resulting notes will be indicated in blue. 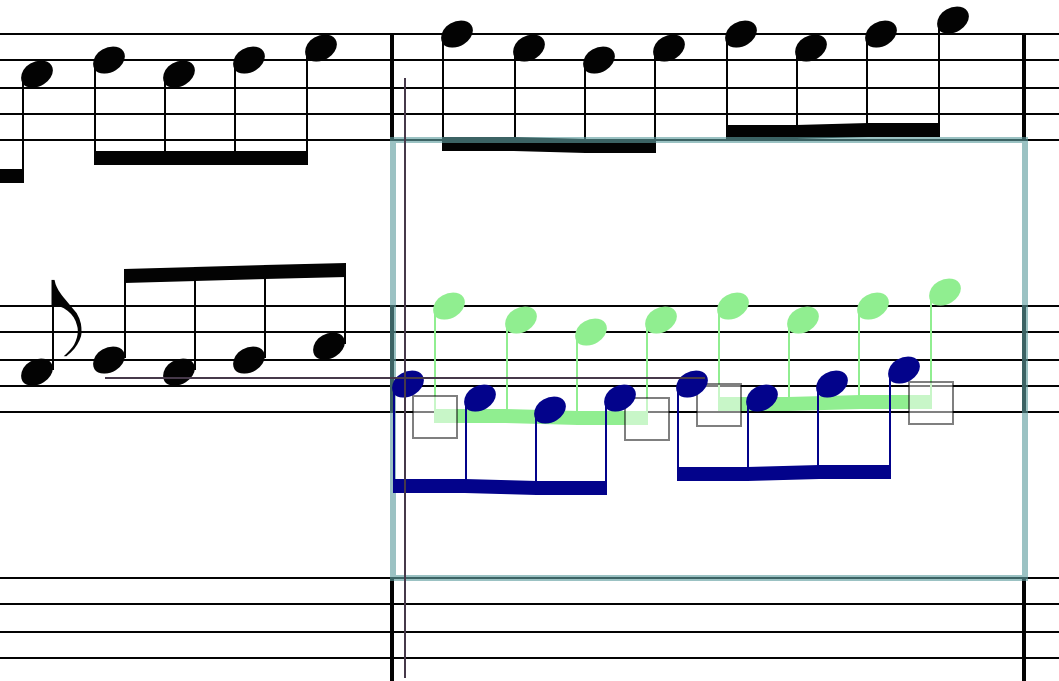 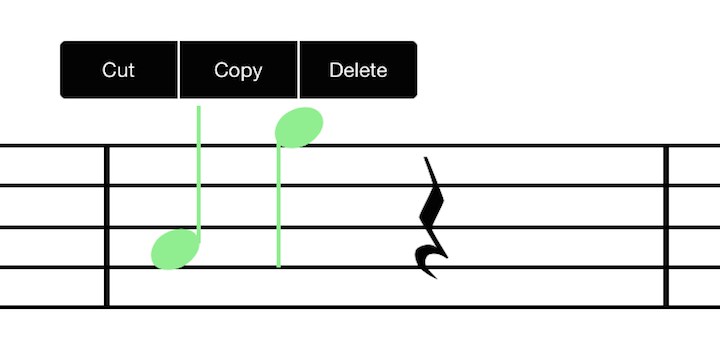 Cleverly, to delete many items in the score you can simply draw an “X” on them, or, if you’re really passionate, you can scratch them out Beethoven-style.

Like StaffPad, you can overfill or underfill a bar and Touch Notation will let it be (however, Touch Notation won’t signal that’s it’s misfilled by coloring it for you like StaffPad will). This means that you can continue to edit your music by adding gestures. For instance, you can write in eight “quarter notes” in a bar of 4/4 and then beam them together so that they properly appear as eighth notes. Further, you can draw in secondary beams (Touch Notation will support up to 64th notes) and the app is quite good at recognizing these.

If you need to reverse a stem in order to prepare it to be beamed in a group, you can reverse its direction by simply drawing the stem outwards from the note in the direction you wish it to appear.

Impressively, this means you can create custom beam angles like this:

Adding flags to stemmed quarter notes will turn them into unbeamed eighth notes, with successive flags for up to 64th notes. These must be drawn as Touch Notation requires: a curved flag will be easily recognized, but a straight flag will likely be misinterpreted as an additional note in the chord. If you have a series of unbeamed eighth notes, you can draw a beam across all of them to instantly turn the notes into a beamed group.

As far as I could tell, the writing of accidentals has to be done after a note is entered; you can’t, for instance, write a flat first followed by the note to which it pertains. Touch Pad can recognize double-sharps and double-flats; the former is drawn by writing an “X” to the left of the notehead. A double-flat is written first by writing an ordinary flat, allowing the app to recognize and render it, and then writing another flat next to the rendered one.

Articulations like accents, staccatos, and tenutos are drawn in as you would expect. Augmentation dots are simple dot to the right of a note or rest.

Leger lines must be drawn quickly, or else they will disappear about half a second after you draw them. A more efficient method might be to forego writing leger lines entirely; you can just write the note in the area above or below the staff where you think it should appear, and Touch Notation will make its best guess as to what the note should be. If it’s incorrect, you can always tap and hold to drag it to its correct pitch.

Ties and slurs are recognized reasonably well, and Touch Notation does quite a good job of recognizing crescendo and diminuendo hairpins. Tapping and holding on any item with start and end points will select the item, turning it green in the ordinary way, along with handles which allow you to extend or retract the item. 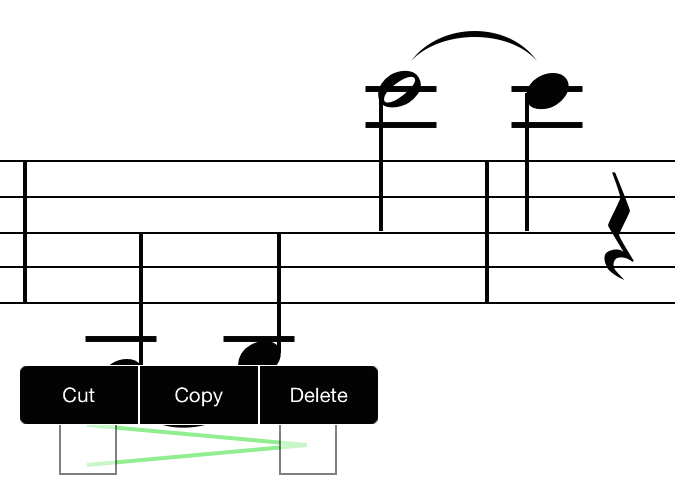 Rests were somewhat mixed. Quarter rests were fiendishly difficult for me to get the app to recognize, but eighth, half and whole rests were fairly easy.