Navigation and the Circle Controls

It should be mentioned that I tested Touch Notation on an iPad Air 2 with 128 GB of storage. I used an Adonit Jot Pro capacitive stylus to write on the screen. The experience was acceptable, but it’s nowhere near the smoothness, fluidity and flexibility offered by StaffPad on the Surface Pro 3 with the Surface Pen. For all of the iOS’s advantages, it was not designed for touch-and-pen operation. “Yecch…nobody wants a stylus,” Steve Jobs famously once said, but one could easily say, “yecch, nobody wants to write music with their finger.”

Kawai has admirably tried to design around this. Most notable in its efforts is the wrist guard, which is a grey overlay on the bottom right area of the screen that can be resized as needed. As you’d expect, it allows you to place your wrist comfortably on the screen without the app falsely detecting it as input. Of course, there is no need for this in the Surface Pro and some Android devices, which have palm rejection built into the hardware’s pen-and-touch technology. iOS don’t have that option available to them, so at least Touch Notation’s solution is much better than having to keep your hand perched unnaturally above the screen. The wrist guard is also available in a left-handed version via a toggle option in the app’s settings.

The wrist guard is one of several options in the green “Circle Control” icon; the others included the help screen, the score library and the app’s settings. Touch Notation groups loosely related functions into one circle control, to minimize the number of icons on the screen. Swiping in one direction or another will activate other related functions. It took a little getting used to, but it worked well.

The red circle control brought up the navigation view, and works similarly to Sibelius’s Navigator. You swipe left or right on the circle control to change the page. Since the app fully supports pinch- and tap-to zoom and two finger scrolling, I’m not sure how useful navigation view is, but it’s there. You can also swipe left or right directly on the page to turn the page, if you’re zoomed out widely enough to see the entire page at once.

Speaking of which: there is no scroll or panorama style view in Touch Notation. Reminiscent of the early days of Sibelius, page view is the singular option. It’s interesting that StaffPad took the opposite approach (scroll view only, except when printing).

The blue icon switches between notation input mode and memo input mode. The memo input mode is for freehand notes, but they’re fixed to the position on the page, not to the music. So it’s of very limited use.

The three quarter notes in the brown icon represent note spacing. It’s worth noting that the app doesn’t automatically space your music. Given the limited screen space you might have when using the app, especially on a phone, this is a smart choice so that the music doesn’t jump around too much. But you must remember to manually space your music every so often. The brown icon also contains a good deal of score-specific settings and a transpose function.

The blue icon contains the familiar and handy Undo and Redo functions.

The orange icon is for playback-related controls (more on that in a moment).

In addition to the lasso and tap-and-hold methods to select individual items described earlier, you can select a passage of music by double-tapping and holding a bar, and then dragging to extend the selection, after which you can cut, copy, paste or delete the music. Although the finer points differ among different notation apps, this works similarly to other familiar programs. 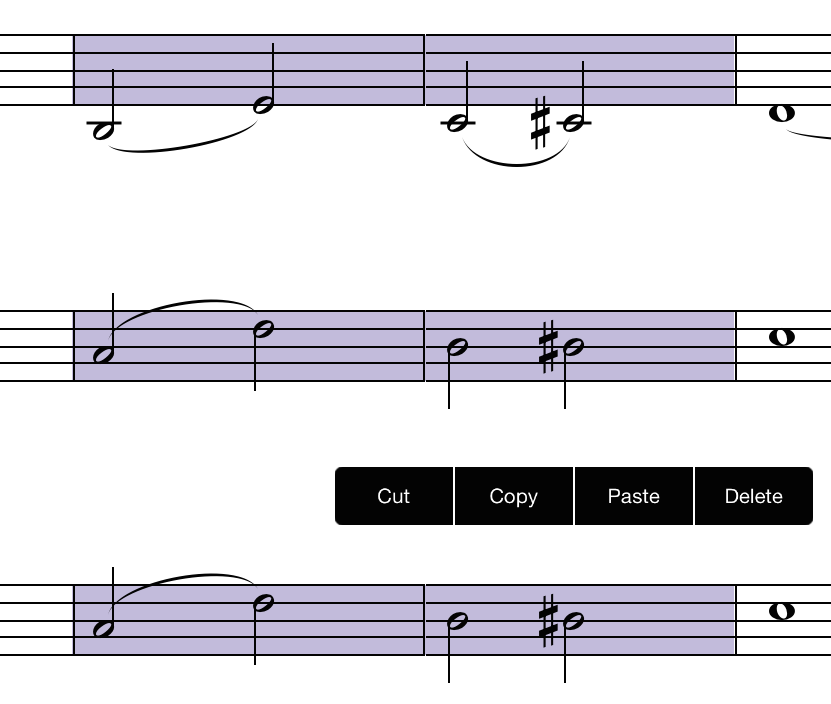 Double-tapping and holding to the left of an instrument name will select the entire instrument. In addition to the usual contextual options, a Property option appears. Selecting this gives you the option to change the instrument’s displayed name, whether it’s on a single or grand staff, its starting clef, and its transposition. In a nice surprise, I was able to use this to make instruments with non-standard transpositions, like for horns in A. 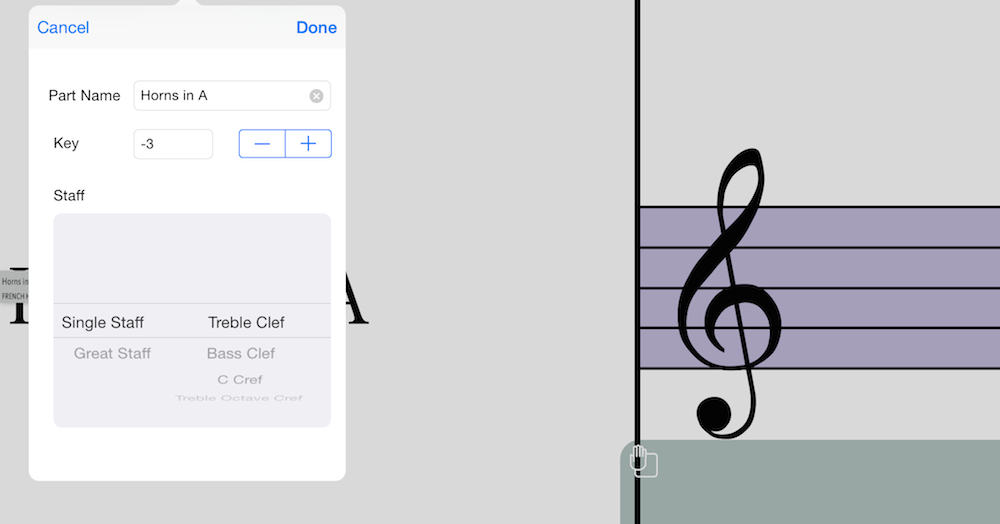 Adding or deleting instruments is reliant upon gestures. Drawing an “X” to the left of a staff deletes a part from the score; drawing a “+” will add a part in the position at which you draw the “+”. It worked well enough, and although it’s a clever way to add or delete one or two parts, doing so for many more than that would be tedious. 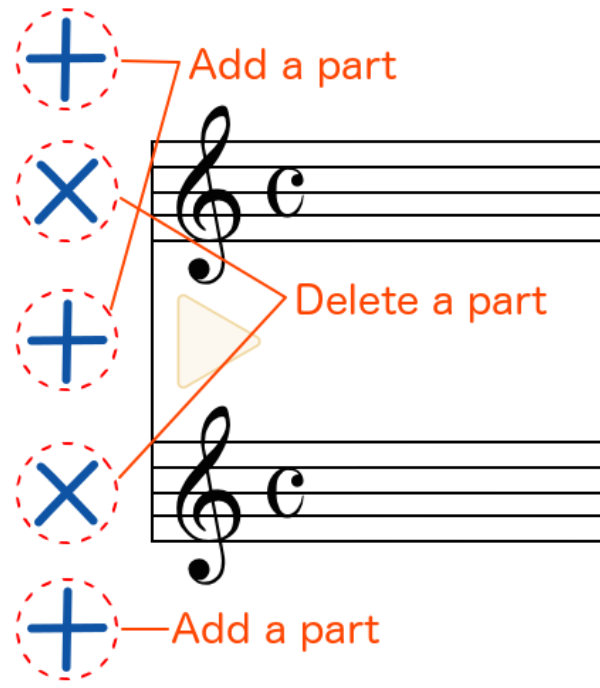