When learning the finer points of music engraving, a useful exercise is to take a piece of traditional, plate-engraved music, and try to recreate it as closely as possible. (It’s also a great exercise for learning the capabilities of your chosen notation software, too.) No matter how close I got the music looking, one other factor would have a profound effect on the look of the page: the text — or rather, the type.

Traditional plate engravers used a set of ‘punch’ tools to stamp clefs, noteheads, rests and other symbols into the metal sheet; and these tools included sets of type, which would also be hammered in. In a straight line. Evenly spaced. In reverse!

I soon noticed a particular style of type prevalent in European 20th-century engraving. You’ll probably recognize it when you see it. Even though there is variation between publishers, it’s immediately redolent of old scores by firms such as Durand, Novello, Ricordi and Henle.

However, finding a family of digital fonts that closely matched this ‘music type’ was very difficult. The standard font libraries from companies like Monotype and Linotype, which converted many of the classic designs from the hot metal era into digital form, had nothing that was exactly right.

Type nerds might well describe music type as being in the ‘Scotch Roman’ genre of serif faces; even narrowing it down to a variant of the ‘Century’ family, which was created in the 1890s and gained popularity throughout the 20th century. (New Century Schoolbook, now commonly used in music scores, is a variation of the original Century, though this is too wide and podgy when compared to music type, and the Italics are quite different, particularly the f, which lacks a ball on its descender. It may have gained popularity for the similarities it has to music type.)

ITC Century, despite having 16 different styles, is perhaps the closest, but it’s still not perfect, and has some noticeable differences in its weights and metrics. The open source family ‘Old Standard‘ also comes close, but still no cigar (nor a Bold Italic).

So, to fill the void is Nepomuk. It was only a matter of type!

As luck would have it, my friend Florian Kretlow had created some designs for just such a typeface, after studying some old Henle scores.  Florian described his designs as ‘nowhere near finished’, so as I had already worked on bringing his designs for the Sebastian music typeface together into a SMuFL typeface, it seemed like a good idea to bring a family of ‘music text’ fonts to fruition. The existing symbols needed revising for a consistent look, and I had my own ideas about adjusting the metrics of the lettering to make them just so; many more non-alphanumeric symbols needed creating. I also wanted enough diacritics to be able to write names like Leoš Janáček and Antonín Dvořák. Bold and Bold Italic styles needed to be created.

The adjustment of the optical spacing between particular pairs of letters, known as kerning, was the biggest task. The letters Av, for example, need to be closer together than normal, because of the parallel diagonal lines that allow the v to overlap the foot of the A. Otherwise, you see a large white gap between the letters.

There can be a lot of different text on a page of music. Titles, dedications, names, page numbers, copyright declarations, publishers’ catalogue info — and that’s before we get to lyrics, tempi, expressions, dynamics, and other instructions on the staff. You can use different faces, though they need to be contrasting; otherwise using one face in a small range of styles and weights is  You could use twelve different styles of type to cover all the uses, but of course plate engravers had a limited number of sets and sizes on their shelves, and in graphic design, as with Jazz, less is more. The type needs to be versatile to handle all these different uses.

Lyrics is one area of engraving where the choice of font is most crucial. The type must be legible, often at a small size, and not so big or wide that the note spacing suffers. Many an attractive typeface will produce unattractive music. In revising the font’s metrics, I wanted to make sure that it would be as clear as possible while minimizing distortion to the note spacing.

Academico needs more room here, and would normally cause the notes to move apart.

In plate engraving, titling and other ‘page furniture’, like the composer’s name, is often set with some additional spacing between the letters. I thought that it would be better to make the font quite tight by default, letting users add extra spacing where needed, instead of making it looser, and letting users squish the characters together.

The Italics were also crucial and idiomatic to the style. The original music type works well as a companion to dynamic symbols, for things like ‘sempre’. 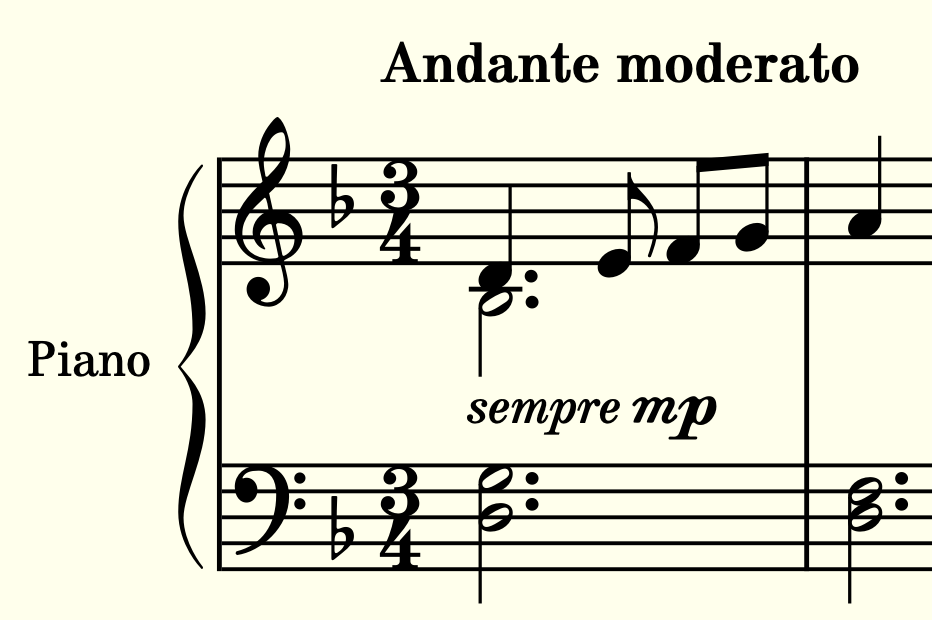 The Regular and Bold faces contain Small Caps glyphs, though very few (if any) notation apps can access OpenType features like alternate glyphs. So, I’ve created additional fonts that have the lowercase and small caps switched. You can select RegularSC instead of Regular.

I’ve created a complete facsimile of a 1903 Durand score (Debussy’s Trois Chansons), to showcase the font. But there is still more work to do. I’d like to add Greek and Cyrillic alphabets, as there is plenty of music that needs those language scripts. IPA symbols are often used where singers are unfamiliar with pronunciation, or for vocal effects.

These days, we are blessed (or possibly cursed) with thousands upon thousands of digital typefaces: free and open source; mainstream commercial; and bespoke boutique. Font-creation software is a lot easier to use than it used to be. As ever, I’m not the only person ploughing this furrow.

Jawher Matmati nailed the Durand type with his Roman Ionic, which is an excellent recreation, also available from Notation Central. Djuro Zivkovic has also been working on Roman and Italic faces called “Old Music Standard“. Among all the Centurys, Moderns, and Scotches now produced by smaller foundries, there may be other decent matches for Music Type.

The best designs are the ones that get out of your way, and provide the information without you noticing them. But they also convey a spirit; a mood. I hope that these fonts convey the heritage of traditional engraving, while also being functionally useful for new publications. I didn’t want a font that was a historical re-enactment, simulating ragged, worn edges, and blotchy, over-inked corners, like some typeface for a Disney Pirate. Everyone knows we’re using computers and laser printers now.

Nepomuk is available at Notation Central. It was created and is made available under the SIL Open Font License, and as such it is available at no charge; however, a suggested contribution of $10 or whatever you care to contribute towards this project is greatly appreciated.

Incidentally, if anyone has a set of traditional engravers’ punches, either for text or music, or knows where some might be: do get in touch, as I’d be very interested to see them.

Intelligent figured bass is one of the new features in Dorico 3.5, and that’s no empty boast. Dorico’s insistence on...

Every year, the Music Publishers’ Association of the United States holds a gala lunch to hand out its prestigious Paul...