StaffPad Ltd. has released a new update today to its flagship StaffPad music handwriting app. The update features a broad range of improvements such as support for pickup bars, D.C./D.S. repeats, bar repeats and much more, not to mention recognition and performance improvements, StaffPad is a free update for existing users, and $70 for new users.

As before, it’s only available for Windows pen-and-touchscreen devices such as Microsoft’s newer Surface Pro 4 and the Surface Book, and older devices like the Surface Pro 3 and the Surface 3. The Windows Store will automatically download and install the update as long as you have automatic updates enabled, but you can manually update by opening the Store app, go to Downloads and updates, and tap Check for updates. 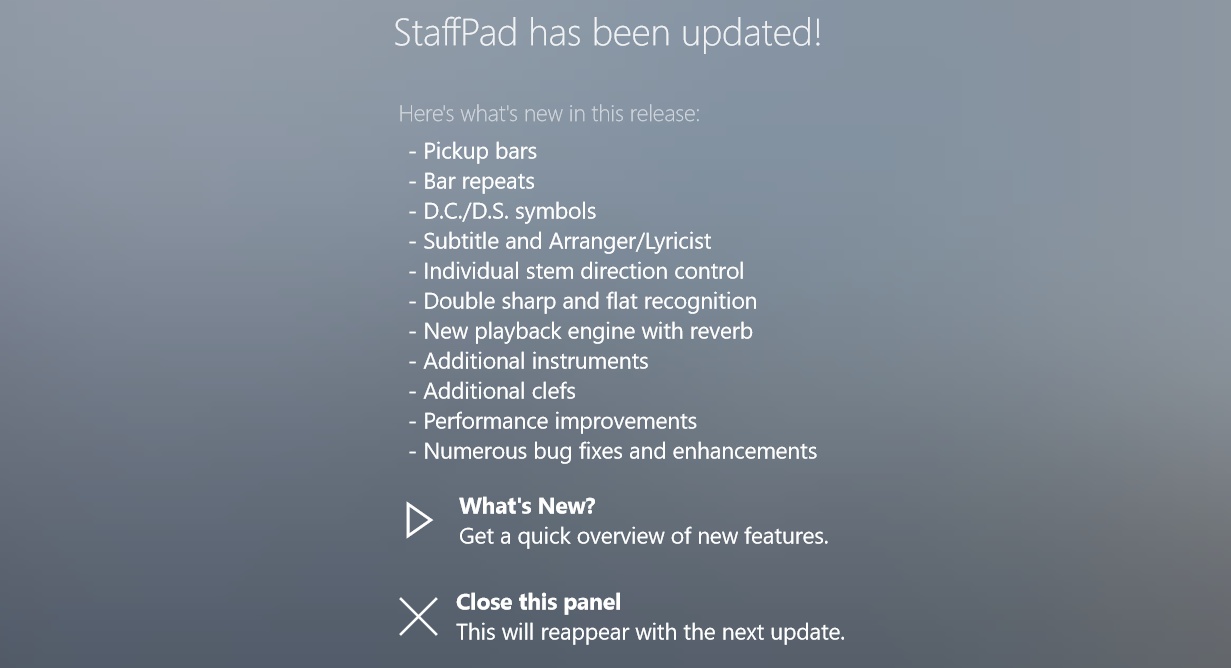 It’s hard to believe that StaffPad debuted barely a year ago. Its fluidity and sophistication was so amazing to many that it was easy to believe that it was an April Fools’ Day joke. One year later, StaffPad has already seen a full redesign to accommodate Windows 10, and has added a number of new features along the way, most significantly in November of last year.

About today’s updates, StaffPad lead designer and founder David William Hearn said in a blog post, “The app has evolved and improved at an astonishing rate. Of course, we haven’t been resting on our laurels. [Lead developer] Matt [Tesch], myself, and the rest of the team here have been hard at work over the last few months to bring a big update to StaffPad, just in time for our first birthday.”

Let’s take a look at the latest StaffPad features, but before we do, a few disclosures:

StaffPad now properly supports bars of less than a full duration as a pickup to the first full bar of music, without marking them as underfilled.

Instead of pre-determining the duration of the pickup bar like you might in Finale or Sibelius, in StaffPad you actually write the music first for the duration of the pickup, whether it’s an eighth note, quarter note, or something else. It’s only necessary to write music in one instrument at first, since it’s possible to write music in other instruments later.

Once StaffPad has recognized your handwriting and converted it to engraved music, long-press (touch and hold) the bar to create the pickup: 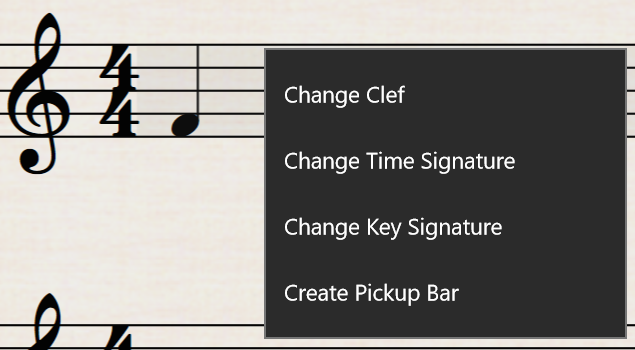 The pickup bar is created and the width of the bar is shortened by an appropriate amount. The bar number of the pickup itself becomes bar 0.

It’s possible to remove a pickup bar — or, more accurately, turn it back into a normal bar — without losing any music. Simply long-press the bar again: 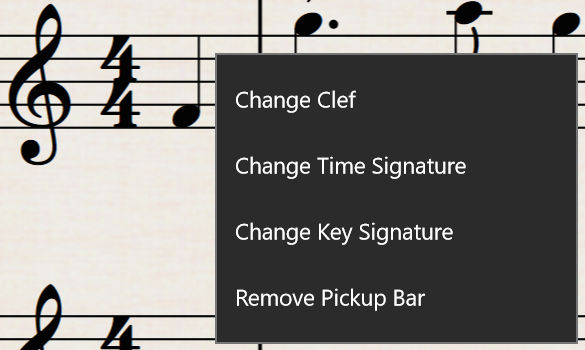 No music is deleted; the bar just converts back into a bar of full duration, and is re-numbered bar 1. It’s refreshing to see StaffPad devising solutions to the task of creating and removing pickup bars in ways that are both optimized for its platform and generally quite a bit easier than most current desktop software.

I was surprised to see support for D.C. and D.S. repeats in a StaffPad update; but their inclusion is a welcome addition to StaffPad’s rapidly growing feature set.

These markings can be placed in StaffPad as either symbols and text. If you’re familiar with how many of StaffPad’s other symbols work, you’ll appreciate how these work.

If you’re familiar with inserting text in StaffPad, you can type in these markings instead, and StaffPad will recognize them just as well: 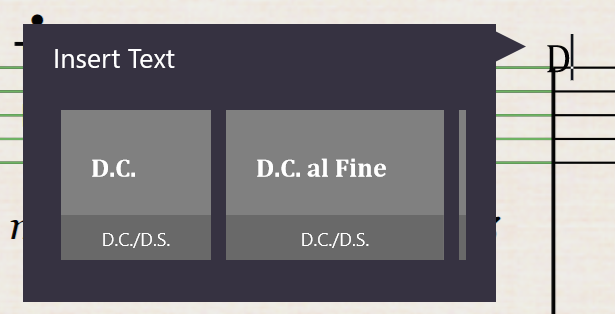 In either case, once you place them in your score, unless it’s a simple “D.C.” you’ll need to place at least one other marking to complete the repeat stucture. Fortunately, StaffPad colors your current marking red to warn you that the structure is broken:

An appropriate symbol(s) appears in the Symbols palette, awaiting your next move (in this case, to Coda, but it could also be Fine and/or a Segno):

Once you place that marking in your score, your repeat structure is complete and the red color of the marking(s) will be removed. These markings can be dragged left or right in your score as you need.

The humble repeat sign, long a copyist’s favorite shortcut in a pinch, is now available in StaffPad. This one’s also available from the Symbols palette:

These can be “painted” in across many bars by dragging the pen to the right, like how tremolos are placed in StaffPad:

Also like tremolos and many other symbols, dragging the pen down or up produces a variation of the symbol; in this case it’s either 2-bar or 4-bar repeats, respectively:

Once you lift the pen up, StaffPad places the multiple-bar repeat correctly.

More goodies for those scoring for pop and commercial music: Now you don’t have to spend time changing the noteheads of drum kit music; StaffPad will do it automatically.

Just write the music on the appropriate lines or spaces, and StaffPad converts it to standard drum kit notation:

Playback is accurate and exporting to a General MIDI drum track is supported.

Reverse stems on an individual basis

Now when you select individual notes, you can flip their stem direction by tapping the Reverse Stems icon that appears in the command bar. The most practical use of this feature is the ability to connect stems that were previously unable to be connected.

Previously supported in StaffPad only as the result of a transposition, these can now be drawn in directly.

Have a hankering to write in baritone or French violin clef? Now you can!

An all-new playback engine and convolution reverb is included with the latest update, which StaffPad says is more efficient and sounds better.

StaffPad says that performance for the new update is now twice as fast as it was before, and large scores are handled better.

Handwriting recognition — the bread and butter of StaffPad — has been made more accurate, and in working with the new update it certainly seemed that writing music was more fluid, with fewer recognition errors.

StaffPad says that a lot of work was done “under-the-hood” on the playback and layout engine. For instance, it’s now easier to scroll the score during playback; there’s a “catch” feature with playhead (familiar to those working in a DAW) where you can scroll ahead, but if you scroll back to where the playhead is, StaffPad will catch it and continue following along with the score.

All in all, this a very solid update to StaffPad. When StaffPad was first announced last year, I said that it was the fun and innovative music notation product available, and that’s still the case. Writing music with the pen and seeing it instantly convert to engraved notation still feels futuresque. Due in part because of its exclusive availability on Windows tablets, most potential users have yet to experience it firsthand, which makes presenting a demo of it all the more exciting.

At the same time, StaffPad has marched forward to be not just a fun product but an increasingly professional tool with a robust set of features. Anytime I work with or review a music notation product, I’m always reminded just how fiendishly complex music notation is, which makes it all the more remarkable that there have been (and continue to be) so many people devoted to mastering its complexity via software solutions.

One notable feature still missing from StaffPad at the moment continues to be the lack of support for chord symbols. With the recent improvements in placing repeats, codas, bar repeats and automatic drum kit notation, having chord symbols would be the missing link for jazz and pop musicians to be able to create lead sheets and commercial charts from start to finish, all from within StaffPad.

Perhaps that will come in time. But in the meantime and in the months and (hopefully) years to come, if past is prologue, expect StaffPad to only continue to improve, adding both conventional notation features and new innovations that we have yet to see in any scoring program on any device.