StaffPad, the well-known pen-and-touch music notation app for iPad and Windows Surface devices, has been acquired by Muse Group, the company that owns Ultimate Guitar, MuseScore, and Audacity. The acquisition occurred in December 2020, according to UK government public filings.

Muse Group announced the acquisition in a press release today, one week after announcing the Audacity acquisition and the formation of the Muse Group itself.

StaffPad also announced the move in a blog post. 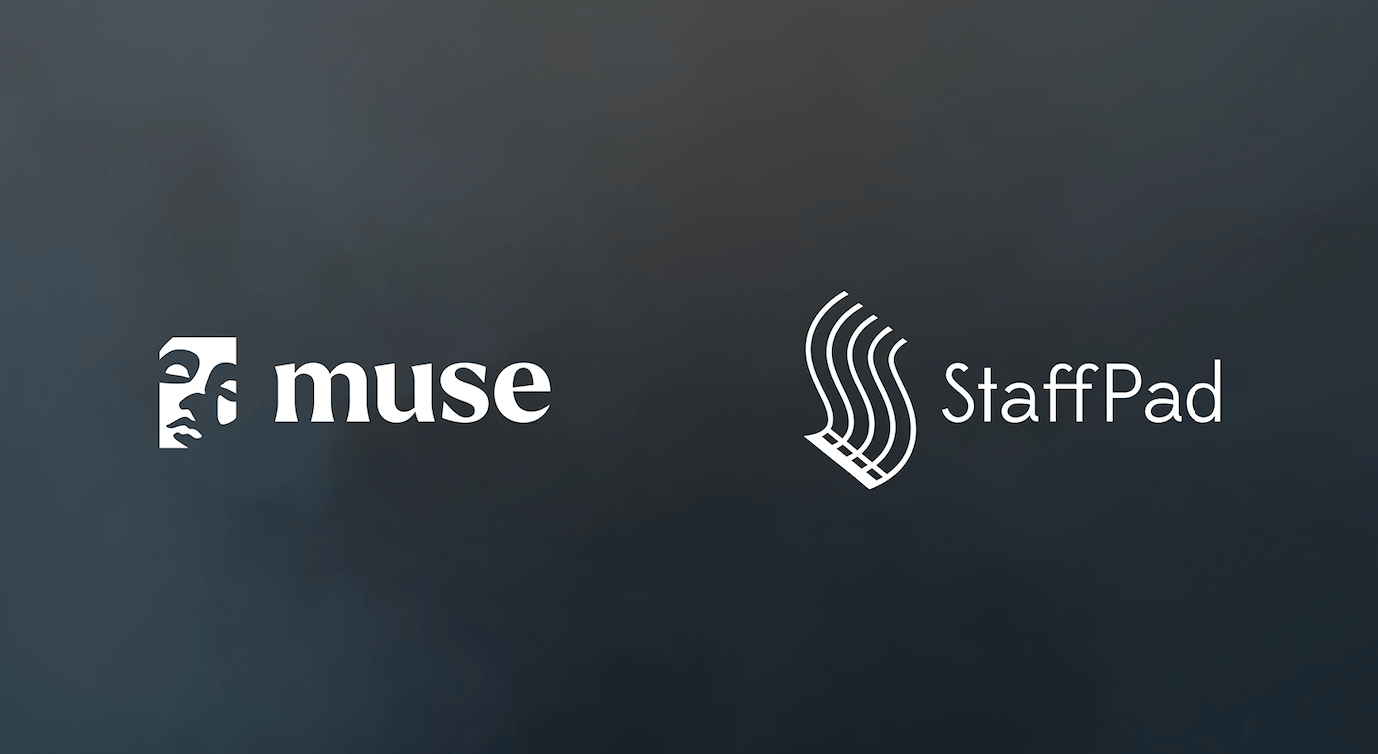 In conjunction with the Muse Group acquisition announcement, StaffPad revealed plans for new features in the areas of audio staves and music transcription, to be released in future updates. Staves containing editable waveforms of audio will appear along with music notation staves in a StaffPad score. Music transcription from polyphonic audio sources is also planned.

David William Hearn, StaffPad’s co-founder and designer, will remain in charge of developing the product with the StaffPad team, including its co-founder and lead developer Matthew Tesch. In a blog post on the StaffPad web site announcing the news, David said that “this is fantastic news for us — and a healthy sign of growth for StaffPad’s future,” and that he, Matthew, and the development team “remain committed to StaffPad.”

“Matthew and I are proud to announce that StaffPad Ltd has joined the Muse Group family of brands,” David told Scoring Notes in a statement. “After many discussions, it became clear to us that joining Muse Group would provide a fantastic opportunity to grow the app, the ambition and the audience, as well as secure the app’s development roadmap well into the future. Furthermore, we all share a common vision and goal… which is to support and serve the needs of the many different types of musicians and composers existing in the world today.”

David said that they were excited about the opportunities to grow the product. “We’re now able to accelerate our efforts, thanks to the additional support and resources that being part of a larger family brings. We can embark on even more ambitious features and projects that were previously out of reach. The long-term vision of StaffPad remains — and Matthew, myself and the development team are hard at work (as always) on the next exciting feature release to StaffPad. We’re all looking forward to an even brighter chapter in StaffPad’s history — and hope you enjoy the ride!”

Daniel Ray, Muse Group’s head of strategy, told Scoring Notes that he’s been a StaffPad fan from the first time it was announced in 2015. “From day one, StaffPad has been a leading innovator in the music notation segment. They were first to market with the ability to compose on a mobile device using handwritten notation recognition, creating an entirely new type of workflow for professional composers. When StaffPad launched on iPad, there was another leap forward with hyper-realistic playback, equal to what you might expect from top level virtual instrument libraries, but small and efficient enough to work on a mobile device. It completely blew my mind.”

About the StaffPad acquisition, Daniel said, “Not only are we excited to welcome StaffPad into the Muse Group family and ecosystem, even more exciting is the opportunity to work with David, Matt, and the great team they have assembled. While they will remain quite focused on the future of StaffPad, both their innovations and way of thinking will inspire and influence other aspects of Muse Group products, services, and the company as a whole.”

The terms of the deal were not disclosed. Muse Group’s chairman is Eugeny Naidenov, who founded Ultimate Guitar in 1998.

Daniel will be speaking with Scoring Notes in greater detail about the recent Muse Group developments on a forthcoming podcast episode.

David recently appeared at Apple’s iPad event on April 20, 2021, demonstrating yet-unreleased StaffPad features that take advantage of the iPad’s capabilities. “The processing power’s insane,” David said about the new M1-powered iPads. “Audio transcription lets you put the iPad Pro on your piano and just start playing, and that will transcribe into notation what you just played.”

Although the appearance at the Apple event was brief, it gave a glimpse of what was to come for the future of StaffPad. Generally, StaffPad does not have a history of announcing features prior to release, but in tandem with the news of the Muse Group acquisition and on the heels of the Apple event, today David announced support for audio staves and music transcription within StaffPad, to come later this year.

Audio staves will appear as separate staves within a StaffPad score. From a screenshot released by StaffPad in the feature announcement, the audio staves look much as they would in a familiar DAW application, with a waveform representing the audio — except that they are fully integrated with music notation in the score.

In describing the feature, David says that users will be “able to easily record or import audio files, edit them directly on a score canvas using your Apple Pencil or Windows Pen, and have them play back right alongside your instrument staffs. You can cut, copy, trim, fade, crossfade, overlap, move, snap, and adjust the gain of individual audio clips held on a special audio staff, and create as many audio staffs as you like.”

David said that the “seeds for seamless audio support were planted into StaffPad’s design from the start,” and explained the reasoning why the playhead and the automation layer work in linear time, rather than relative notation time. He said that the “modern composer often works beyond the walls of notation. These days, the composition process involves working with sound. As composers, we want to work with audio sources like vocals; synths; loops; sound effects or dialogue. It’s useful to be able to capture ideas in their raw form, as and when we have them.”

DAW-like audio capabilities and comprehensive notation support within a single music scoring application are what many composers have often wished for in describing their ideal software. In a recent Scoring Notes podcast episode, composer and orchestrator David Metzger referred to this as “the holy grail” of workflow, when describing how he currently switches between Cubase and Sibelius during his orchestration process.

It is too early to tell if StaffPad will deliver everything that users desire in this area, but David says that they are planning to release this feature “as part of the next major update to StaffPad,” in the “coming months”.

Also announced today was future support for audio recognition — in other words, music transcription from an audio source, including polyphonic sources such as a real acoustic piano or guitar. This is what was briefly demonstrated in the Apple video, and David says that more powerful devices like the M1 iPad Pro will allow the user to record directly onto an instrument staff, and see the notes appear in real time.”

In today’s announcement, less was said about this feature than what was revealed about audio staves; the audio recognition feature is not expected to be introduced to StaffPad until later in 2021.

More about StaffPad from Scoring Notes

On Scoring Notes, we reviewed the initial release of the iPad version of StaffPad along with the rebuild for Windows in February 2020. At that time, StaffPad also introduced a digital music stand app for performers called StaffPad Reader and real-time file synchronization technology called ScoreSync.

We also made a video review and feature tour of StaffPad, demonstrating the process of creating a score from scratch, writing and editing music, playback, automatic and sync with the Reader.

StaffPad has been updated regularly since then, most notably in June, October, and December 2020, to include more notation features, key command support for when a keyboard is selected, and beginning work on localization and translations of the app.

Update: An earlier version of this post stated company information provided by Muse Group at the time this post was published; however, Muse Group has subsequently corrected their fact sheet and so we have removed it from this post.

The company that owns MuseScore and Ultimate Guitar has announced its acquisition of Audacity, the popular free audio editing software....