Updated on May 4, 2022 with additional links to resellers for the perpetual upgrade.

Avid has released its latest update to Sibelius for Mobile, its version of the software that runs on iPad and iPhone. The headline new feature in this version is likely the one most often requested by users: transposing. This works for both staff and system selections in much the same way Sibelius for desktop does, albeit with a different interface.

Today’s update includes some other handy improvements: The new templates (Manuscript Papers) that were introduced in Sibelius 2022.3 for desktop are included with the latest version of Sibelius for Mobile; the placement of pedal lines is better (as is the placement of octave lines, which was also introduced in 2022.3); various bugs with Apple Pencil gestures are fixed; and the app has been localized for Spanish users.

Even if you don’t use Sibelius for Mobile, there is another item of interest announced today: Avid is once again bringing back the upgrades for perpetual license users who have older versions. 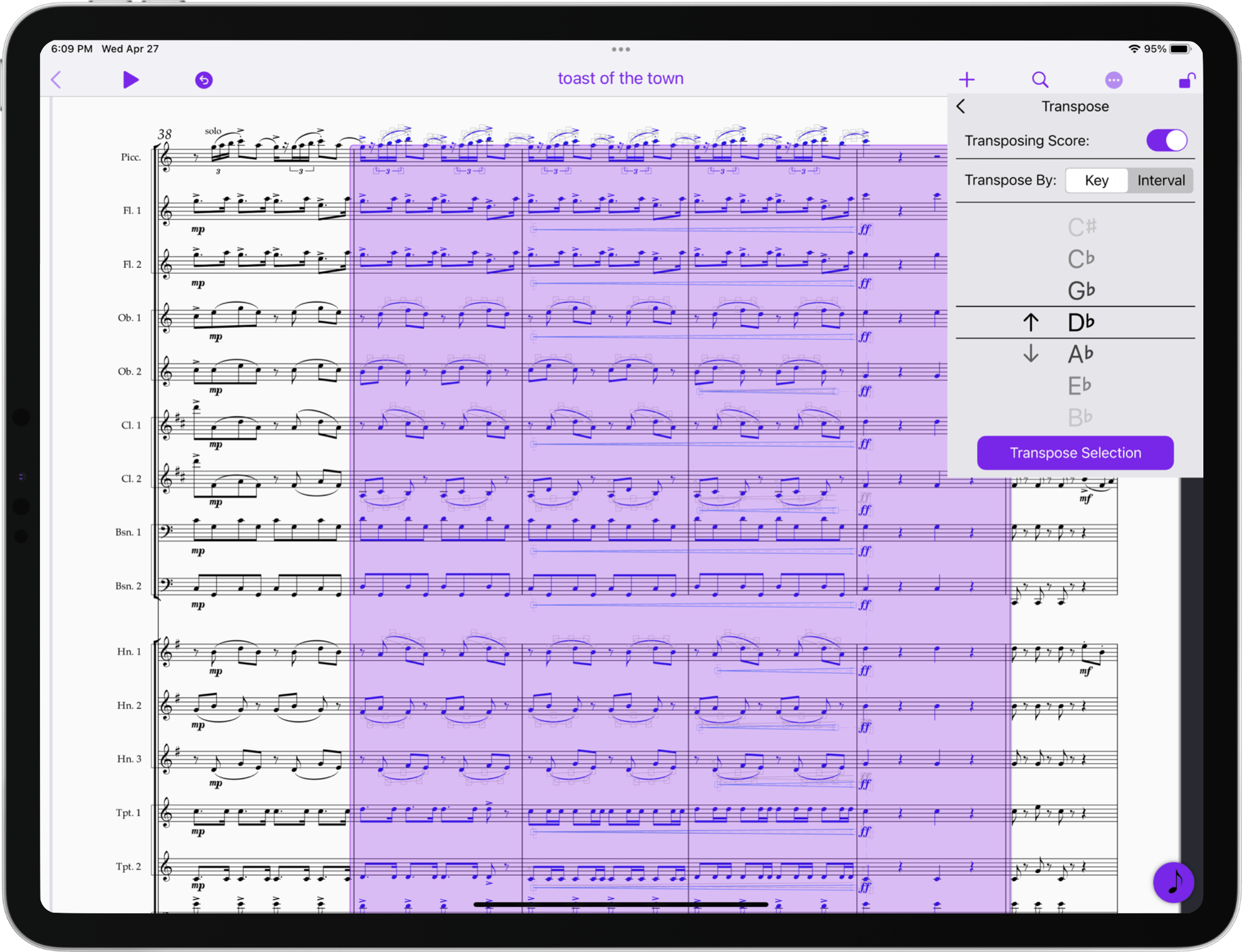 Addressing a persistent user request since its introduction in summer of 2021, Sibelius for Mobile now has a Transpose feature. You can access it by searching for “Transpose” in Command Search, but the task is important enough to warrant its own position in the More… dropdown menu: 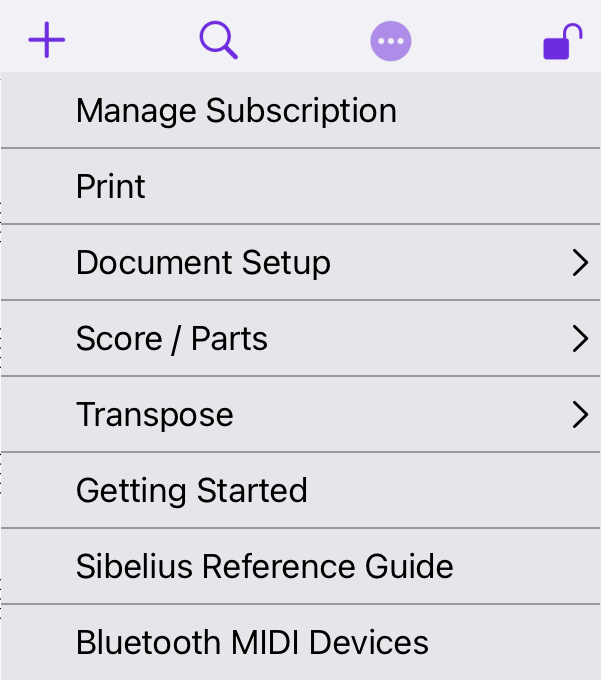 If you have a keyboard attached, you can use Shift-T. 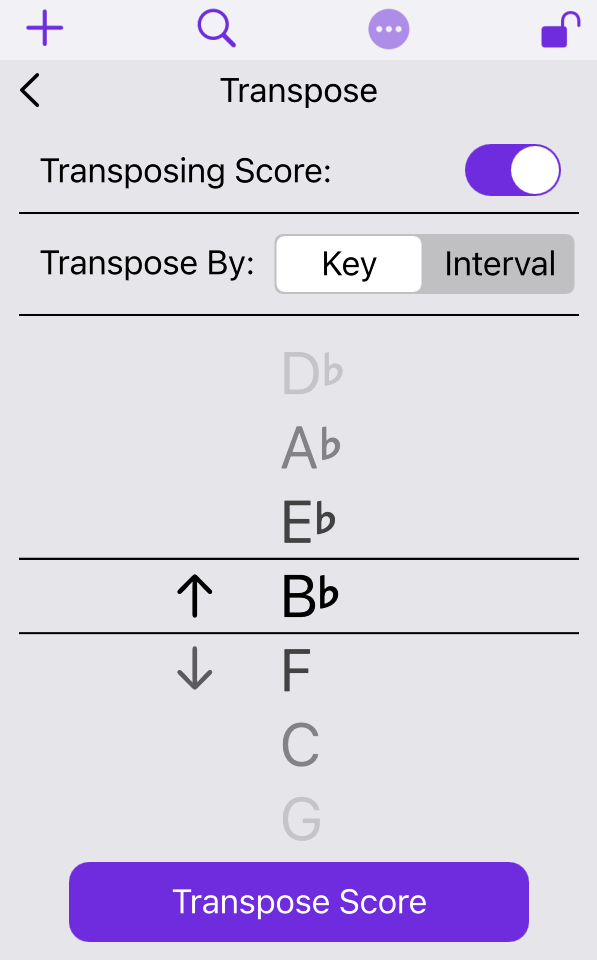 Contrast that with what appears if a selection is made; the button says Transpose Selection: 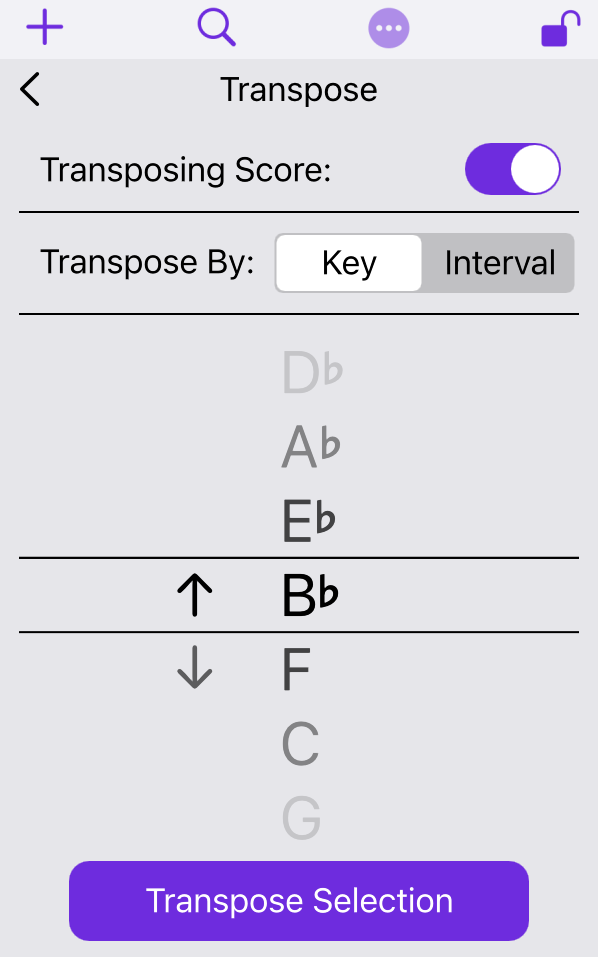 Transposing a system (purple selection) will result in the key signature changing as well (except on atonal scores); staff (blue) selections will transpose the notes, but not the key.

This is a good time to point out that a Transposing Score toggle has made its way to this panel:

Longtime users know that, despite not actually transposing the music in the score, changing it from transposing to non-transposing does affect the state of the score (it can be undone using Undo), and is not merely a view option.

Anyway… you can choose between transposing by key or interval, and most of the options from desktop are there, although they look different. You can’t choose major or minor (Sibelius instead will just keep you in whichever mode you’re in); there are options to transpose up or down, but not to the “closest” one; and the advanced options are not available, including the ability to specify whether or not to use double sharps and double flats.

The new templates (Manuscript Papers) that were introduced in Sibelius 2022.3 for desktop are included; a reminder that on Sibelius for Mobile, these are accessed in the file browser by tapping Create Document.

Octave lines are no longer too long when you add them to your score; this was fixed in Sibelius 2022.3 for desktop and has made its way to mobile.

Pedal lines are similarly improved; the lines that terminate with a “pedal up” end in the correct place instead of carrying on longer than needed. (The “pedal lift” lines remain as before, so that you can string two or more pedal lines together.)

Sibelius for Mobile is now translated into Spanish; this includes not only the elements within the application, but all of the tutorials, sign-up pages, menus, and dropdown menus.

Various other fixes are present in this release, among them improvements to the way Apple Pencil works within Sibelius; for a full list, consult the official post on the Avid web site.

Perpetual license upgrades are back (again)

The saga of the Sibelius perpetual license — specifically the ability for existing license holders with a lapsed support plan to get current with upgrades and support while still retaining their perpetual license — is one that may eventually be made into a Netflix drama.

Discontinued at the end of 2019, it was assumed then that the only way for such license holders to upgrade was to convert to a subscription plan and forfeit their perpetual license, or pay full price for a new perpetual license. But during the 2021 holiday season, there was a new miracle, in addition to the usual celebrations of nativity and candles burning for eight nights: Avid reinstated reinstatements, if you will, for a limited time, offering customers with a perpetual license to get current with the latest updates and support, by bringing back a discounted option.

That deal ran only during December 2021 and expired with the ball drop in Times Square, so if you missed out, you were out of luck — or so we thought, until today, when Avid has reinstated once more the ability to get current with an existing perpetual license.

The new deal isn’t quite as generous as the December deal, which was $59 for Sibelius (mid-tier) licenses or $129 for Sibelius Ultimate licenses. But it’s welcome news all the same, and having the full-featured Sibelius for Mobile included in the fee is a very good value.

Update — May 4, 2022: Some users are reporting difficulty ordering this update directly through Avid. We have actually found better deals for the perpetual license upgrade at the following resellers:

Both are digital downloads and are among the best prices we have seen for users whose perpetual license has expired, and wish to reinstate a perpetual license (not a subscription). Both stores confirm that if you choose not to renew this plan when it expires, the Sibelius Ultimate software and the updates you’ve received are yours to keep.

Nothing lasts forever, and even though we’re told that this current offer is not planned to expire, for existing perpetual license holders who haven’t upgraded yet, this is a good time to get current, in case the opportunity is rescinded in the future.

We’ve covered the difference between a perpetual license and a subscription many times here, but the main difference is that with a perpetual license, if you stop renewing your plan, the software will still work, but you won’t get future upgrades or support. With a subscription, you get upgrades and support as long as your subscription is active, but if you stop paying, the software won’t work anymore (or, more accurately, will be reverted down to the “free” tier).

As before, Sibelius for Mobile on iPhone and iPad is available for free to download from the App Store. Users get access to features that is roughly equivalent to the free Sibelius First desktop version.

If you’re not already an active Sibelius user, you can purchase a mobile-only subscription to unlock one of the higher tiers. Sibelius Ultimate on iPad-only is $12.99/month; Sibelius (mid-tier) is $5.99/mo. This subscription will function the same as other subscriptions you purchase through Apple and will enable Sibelius on all of your iOS and iPadOS devices.

Sibelius 2022.10 adds a command for making a part from a selection of instruments in the score, or one instrument...