Sibelius comes to the iPhone - Scoring Notes
Skip to content

Today Avid has released a version of Sibelius for iPhone. When the iPad version came out nearly three months ago, we took note that the official name of the product was “Sibelius for Mobile on iPad” — with “mobile” first. Implicit in the product name was a future in which Sibelius appeared on other mobile devices, and it turns out that the future is here.

If you use Sibelius on iPad — and, if you have an iPad, there is no reason not to, since anyone can download it — you’ll notice Sibelius on iPhone bears a very strong resemblance to its larger cousin. Like many iPadOS apps that also run on iOS, Sibelius on iPad and iPhone are practically identical to one another, and you won’t have any trouble finding your way around. Other than the smaller screen, the main omissions in Sibelius on iPhone compared to the iPad version are the lack of Apple Pencil support and multitasking.

Other than that, Avid has managed to cram Sibelius into the palm of your hand (cue the marketing photo!). 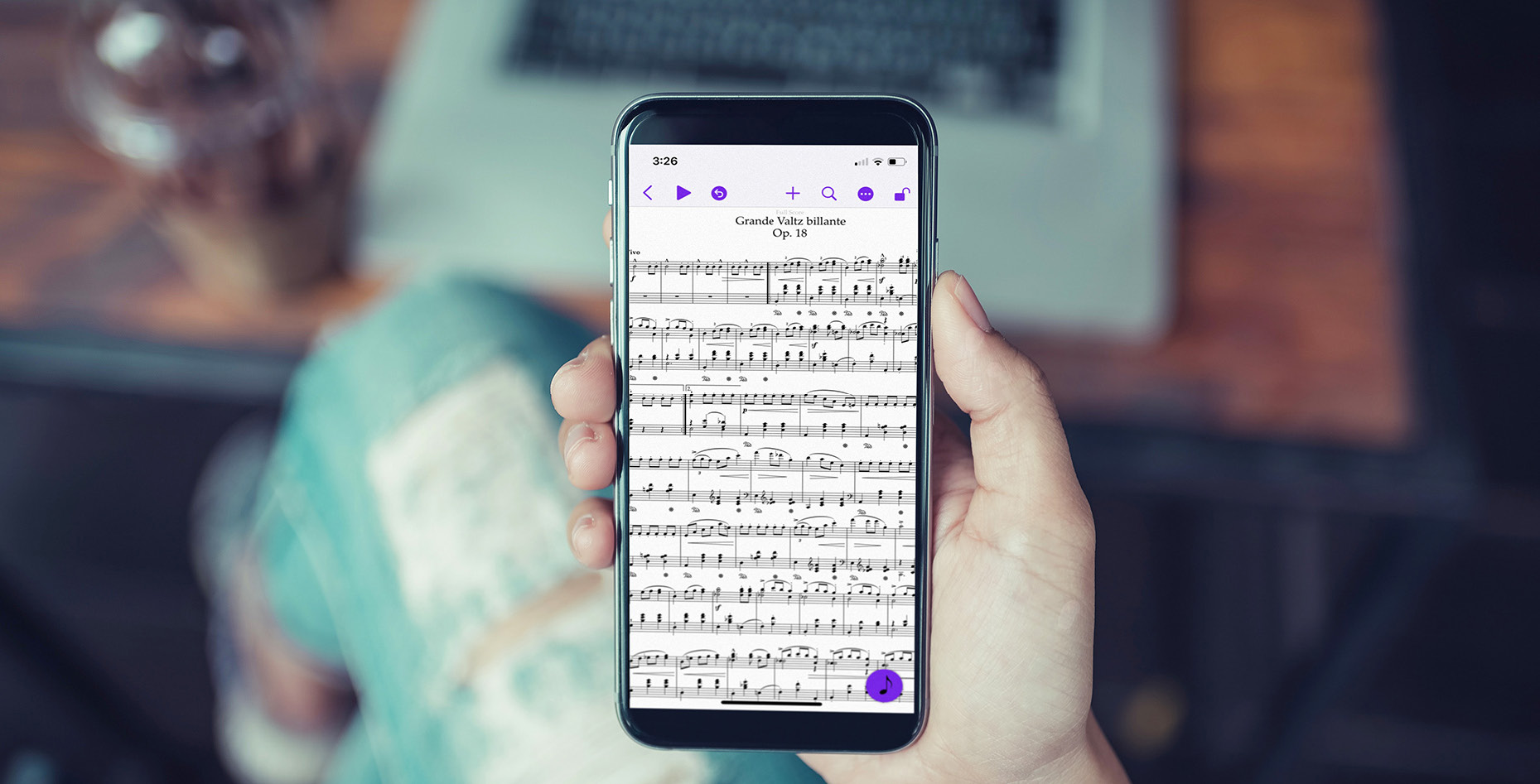 Now, that being said, you probably won’t be composing your magnum opus solely on iPhone. So before we do a whistle-stop tour of what’s new today, let’s briefly discuss why you should want Sibelius on your phone (and while it’s only iPhone today, we’ll simply take at face value that the overall product is “Sibelius for Mobile” and not “Sibelius for iOS”).

The ubiquity and portability of the phone is evident. It’s with us nearly all the time. It’s no coincidence that Avid, in announcing today’s release, is leading the news with an update to Sibelius Cloud Sharing that enables downloading the score from directly within the score view, so let’s explore that for a moment.

Whether you’re in a desktop browser or in a browser on your iPhone, a score shared via Sibelius Cloud Sharing looks nearly the same — some icons may be hidden within a Settings icon depending on the width of your phone:

From there, it’s easy to download the score to your phone, as long as permission to do so has been enabled by the originator of the file…

… and then open it up directly in the Sibelius app on your iPhone:

From there, the world is your oyster, depending upon the tier of Sibelius to which you are entitled. As with Sibelius on iPad, if you have a paid support plan or subscription to Sibelius on desktop, that entitlement carries through to the iPhone without further charge. So Sibelius Ultimate users can go to town editing or changing their scores from here.

But that’s probably not the likeliest scenario for using Sibelius on iPhone — although in a pinch it could well be useful to correct an errant note or fix up a few items.

It’s more likely that, because the Sibelius First tier is free for anyone on iPhone, anyone will be able to view and play back a Sibelius score by simply having the Sibelius file — even without Sibelius Cloud Sharing. Whether that file is shared via another cloud service like Dropbox, or simply by email, it’s trivial to tap a .sib file and open it up in directly in Sibelius now. If you have Sibelius on your iPhone, the Sibelius file icon will be associated with the file.

If you want someone to be able to see and hear your score, you can simply send them the Sibelius file, which is great.

Hopefully that will make exchanges like this real one I received just a couple of months ago a thing of the past: 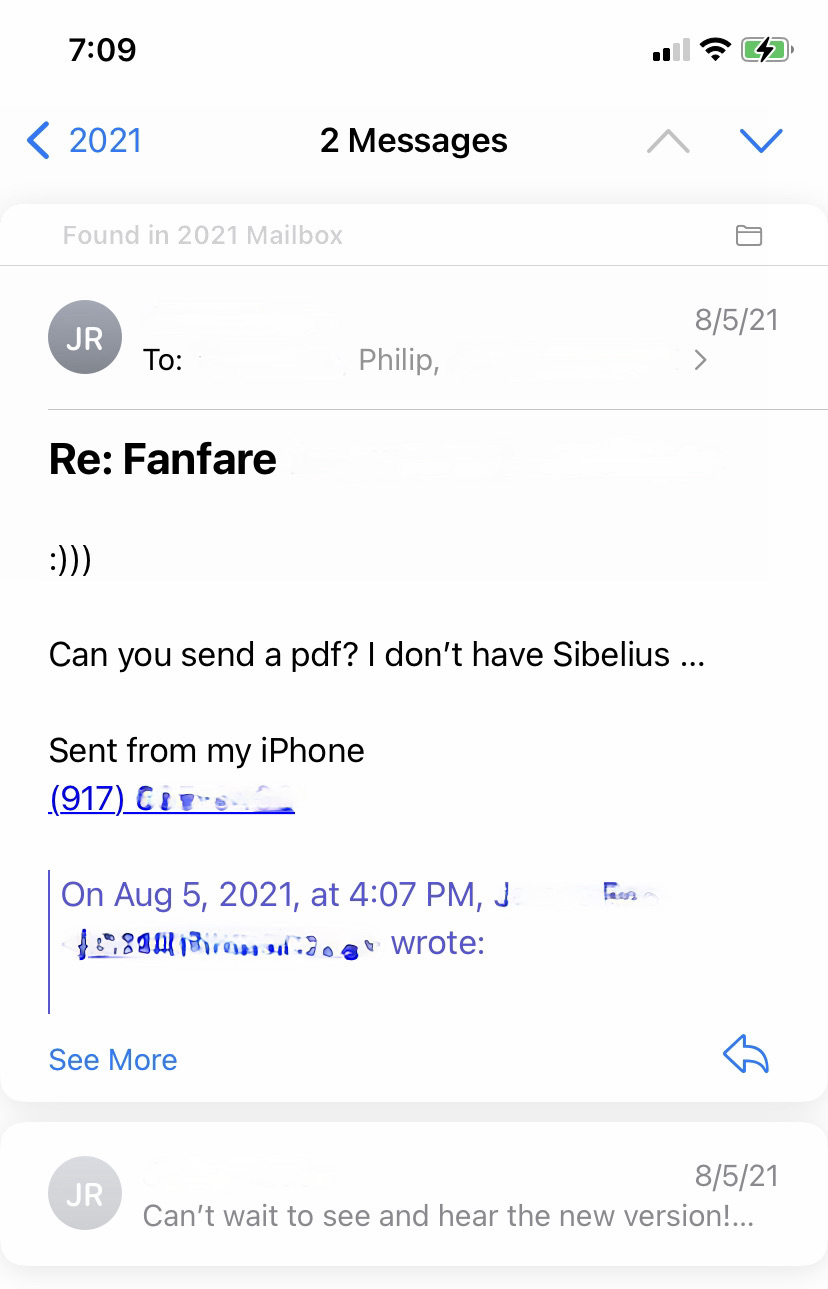 As we observed back when Sibelius on iPad was released, broadly speaking, Avid’s model is that which is employed by other subscription-based apps like Microsoft Office. The same caveats — and fair warnings — that you might heed when sharing a Microsoft Word .docx file should be given whenever you share a Sibelius file. Anyone will technically be able to open that file, modify it, and share it with others. That could be a boon for creativity and ease of collaboration, or an invitation to theft and misappropriation. As with any technological innovation, use it with care!

What’s new on Sibelius on iPhone

Much is the same

The high-order bits are the using the Keypad to drag your finger up or down to raise or lower the pitch by step, and left or right to adjust it chromatically; the Pitch Correction Tool and a Chord Input Tool to help after you input a note (which have since made their way back to the desktop in Sibelius 2021.9); and the reliance upon a new Create menu and Command Search for common and advanced Sibelius functions, respectively.

With today’s release on iPhone, one significant feature makes its way back to the iPad as well: the addition of Panorama view. It’s accessible via Command Search, or via Shift-P on iPad, if you have a keyboard connected.

As the presence of Sibelius on iPhone opens new possibilities, I had the idea that it could be nice if Sibelius automatically switched into Panorama mode when you rotate your phone. This doesn’t happen now, but it’s possible to envision it being useful. Command Search is powerful, but the same knock against it still applies — if you don’t actually know what the thing you’re looking for is called, you can’t find or use it.

Naturally, the smaller screen has its limitations in terms of seeing much music once the Keypad, Create menu, and/or Command Search are open, but that’s to be expected. 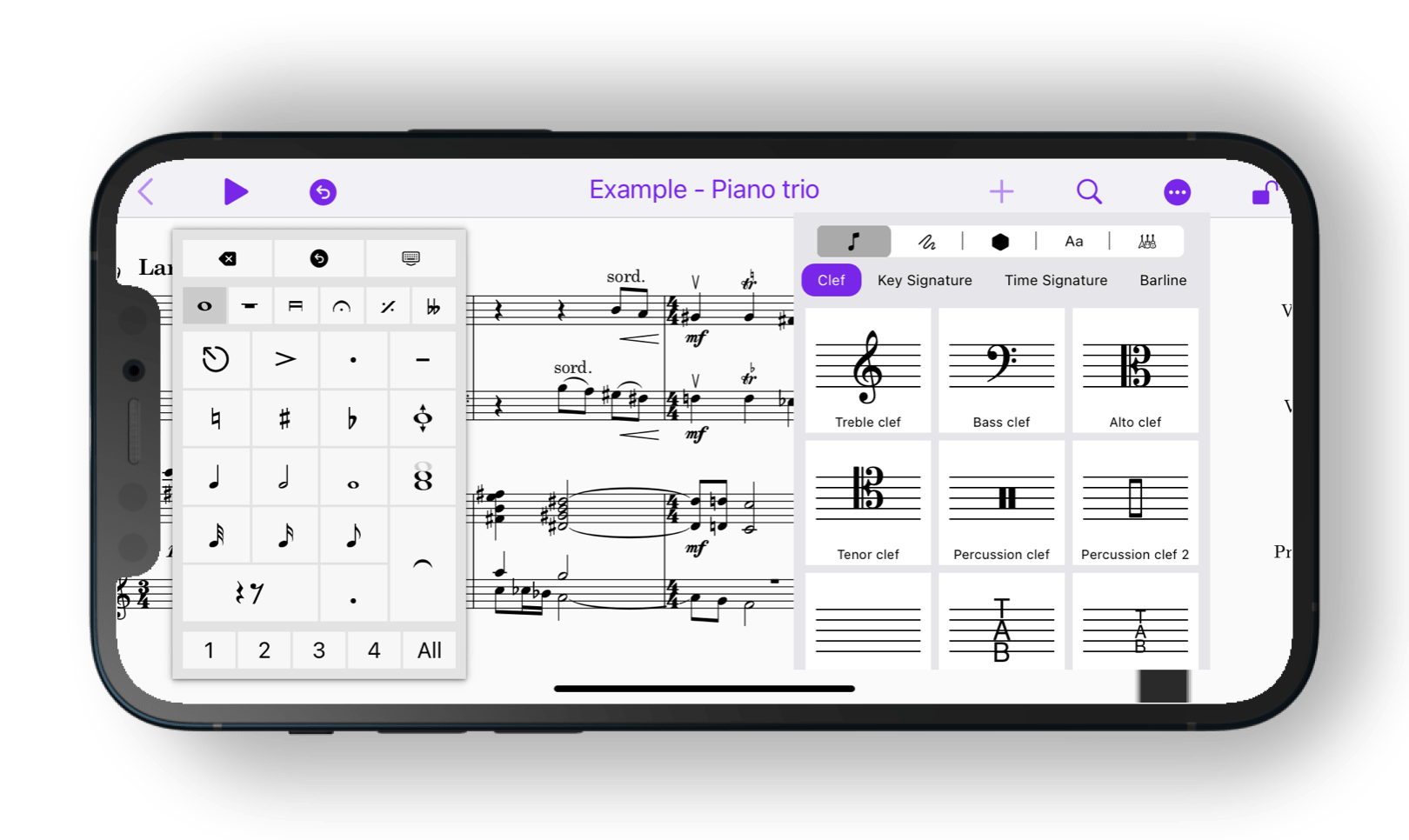 After all, there is only so much screen real estate to be had, especially on smaller phones. The ability to access so many features at all is valuable.

The file’s “save” status is now indicated by the Back chevron in the upper-left hand corner of the screen.

A dirty file (yes, that is the technical term), i.e., one with unsaved changes, will be partially dimmed: 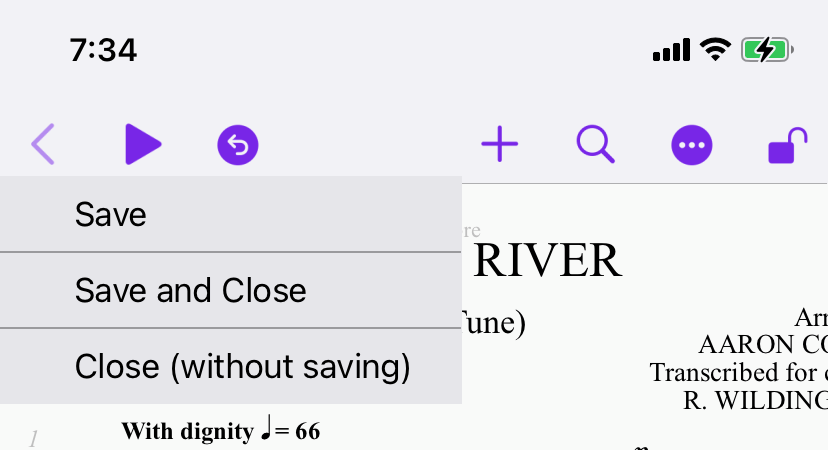 In a file that has no unsaved changes, the chevron will display fully: 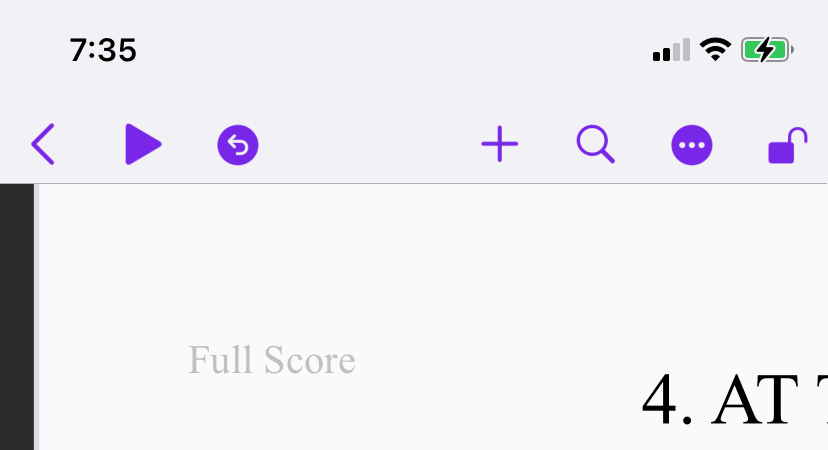 Sibelius for Mobile on iPhone and iPad is available for free to download from the App Store. Users get access to features that is roughly equivalent to the free Sibelius First desktop version.

If you’re not already an active Sibelius user, you can purchase an mobile-only subscription to unlock one of the higher tiers. Sibelius Ultimate on iPad-only is $12.99/month; Sibelius (mid-tier) is $5.99/mo. This subscription will function the same as other subscriptions you purchase through Apple and will enable Sibelius on all of your iOS and iPadOS devices.