Sibelius 8 is here: The new Sibelius looks a lot like the old one - Page 2 of 3 - Scoring Notes
Skip to content

The new features in Sibelius 8.0 are:

Sibelius 8 will be most appealing to users whose primarily computer is a pen-and-touch tablet PC like the Surface Pro. The annotation feature, found at Review > Annotations > Annotate, can be switched on and off. When enabled, you can draw on the score using your mouse or pen, although drawing using the mouse is all but impractical.

Drawing with the pen generally works well. Even if you lift the pen, any marks you make within a second of each other are grouped together into the same annotation, making it relatively easy to select an annotation and delete it or move it around, without having to, say, individually select each letter of a word you wrote. Note, though, that if you’re super-fast and annotate in many different places in the score without waiting a second between each one, those annotations will be undesirably grouped together.

Annotations can be colored by selecting the annotation and choosing Home > Edit > Color > Choose Color. As of now, you can’t adjust the width of the pen stroke.

Annotations are staff-attached, not system-attached, and, once an annotation is selected, the attachment line will indicate the staff and bar to which it is attached. Like other Sibelius objects, they can be copied and pasted using the clipboard or by holding down Alt on PC or Option on Mac and clicking the destination. Annotations appear in the parts as well as in the score.

Annotations are cousins to comments and highlights in the Review category, and like those objects, they won’t print unless you have checked View options when you print your score. Unlike comments, however, annotations don’t appear in the filter, and there is no plug-in as of yet to delete them the way one can with highlights. So deleting many of them at once could be cumbersome unless a solution is invented.

Comments and highlights are valuable tools in certain workflow contexts. One can imagine annotations becoming useful in classroom or collaborative situations, or even when one is composing and wants to mark up a score in a handwritten fashion. Keep in mind, though, that annotations are “dumb” in that Sibelius won’t automatically turn your scribbles into text or music notation the way StaffPad or NotateMe will.

Rounding out the balance of the new features is support for pen-and-touch PCs. It works as you’d expect: you can select bars, objects, menu items, notes and just about anything else with the pen, and you can input notes by tapping on the screen with the pen the same way you can with a mouse pointer. Using your pen’s eraser, you can delete just about anything you ordinarily would by selecting and pressing the Backspace or Del key.

Pinch-to-zoom on both the screen and the trackpad mostly works. However, instead of zooming where your fingers are, like just about every other tablet browser and application does, Sibelius always focuses the zoom in the center of the screen regardless of where you pinch on your touchscreen, which is disorienting. There seems to be a bug right now where pinch-to-zoom in the parts works only on the trackpad but not directly on the touchscreen.

Sibelius 8 takes advantage of DPI scaling on hi-res Windows displays, although the proportions are off in most of the floating windows, palettes, and other GUI elements. Fortunately, the Keypad has been appropriately resized and updated with a new look. The Transport has also been modestly refreshed.

Installation of Sibelius itself is familiar enough. 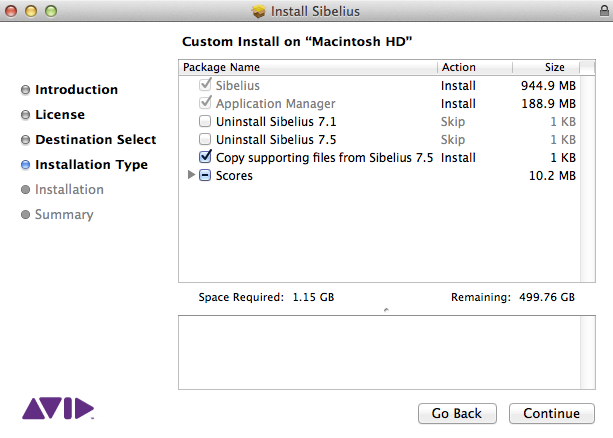 There is an option to copy supporting files from 7.5, and it does a good job of transferring over all of your House Styles, Playback Configurations, custom shortcuts and menu items, as well as most of your preference setting, so that Sibelius 8 looks familiar when you run it for the first time. In my testing, custom shortcuts transferred over, but the Current feature set in File > Preferences > Keyboard Shortcuts was reset to the default Standard menus and shortcuts. So if you have any custom shortcuts and want to use them, you’ll need to toggle this setting to select your custom set.

As mentioned, while this is technically version 8 of Sibelius, it’s only referred to as “Sibelius” in your list of applications. All your previous versions will remain undisturbed and will continue to work for as long as you like — despite rumors to the contrary, they are unaffected by any new license you purchase. However, since Sibelius 7, 7.5 and 8 all look alike, take care to make sure you’re working in the version of the software you intend.

Sibelius 8 is the first version to use the new licensing scheme and to make use of the Avid Application Manager, which is a separate application that is installed on your computer along with the Sibelius installation. Because I was working with a pre-release version of Sibelius, the process may slightly change once made publicly available, but I found it it rather straightforward. You purchase your upgrade or new license through the Avid store, or, if you buy from a reseller, you’ll get a card with a redemption code. 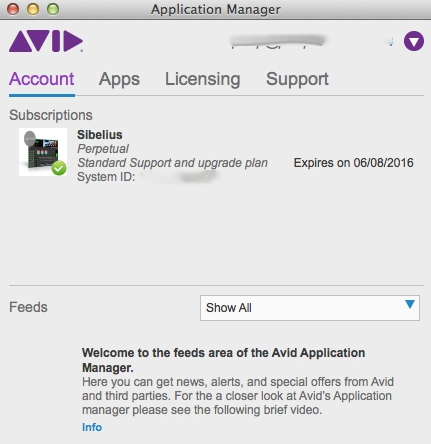 Sibelius will see the activation and will start automatically from there. It wasn’t more or less difficult than the previous system of copying and pasting system IDs and activation keys initially, although theoretically it should be easier in the long term: As you upgrade and install Sibelius on different computers, there shouldn’t be a need to deactivate and reactivate it; you’ll simply log in to your Avid account.

Finally, once you get up and running, you’ll notice that the startup music is from the first movement of Jean Sibelius’s Symphony No. 6. Will we be working backwards through the symphonies now? Only time will tell. As before, you can disable this music from playing, or (unofficially) change it, should you wish.