Today Avid released Sibelius 8.7, the latest update to Sibelius. The new feature in Sibelius is Cloud Sharing, which we previewed a couple of weeks ago. The update is free for all 8.x users with an active subscription or support plan. Sibelius First has been updated as well.

Sibelius users share scores online in a format that can be displayed in any browser on a modern device, regardless of whether or not the person viewing the score owns Sibelius. No extra plug-ins are necessary.

Cloud Sharing uses the same viewer that is being used on many online sheet music stores that offer Sibelius-generated scores for sale, a service known as Sibelius | Cloud Publishing. The viewer can be embedded into a web page using standard iframe code. It is intended in time to totally replace Scorch, the browser plug-in that is no longer supported by many browsers and required users to download it and install it.

When the score is shared, behind the scenes it gets processed by a “headless” version of Sibelius that churns out the component media assets: individual SVGs for the pages of music, an MP3 for playback, and metadata. Those components get assembled and turned into the score that is ultimately viewed and heard. The creator of the score will get a URL that can be shared.

Further options exist to copy the link again, get embed code or stop sharing the score, while clicking Push will update the existing score at the same URL:

Initially, scores will are available for viewing and playback only. In time, transposing and printing capabilities are expected, although these options are not included in 8.7.

Theoretically, any Sibelius file can be shared via Cloud Sharing, although larger files take more time to process than smaller files.

The following examples are all embedded scores. Simple exercises…

…are all handled in the same manner. Cloud Sharing does not support viewing parts at this time; only the full score is processed. 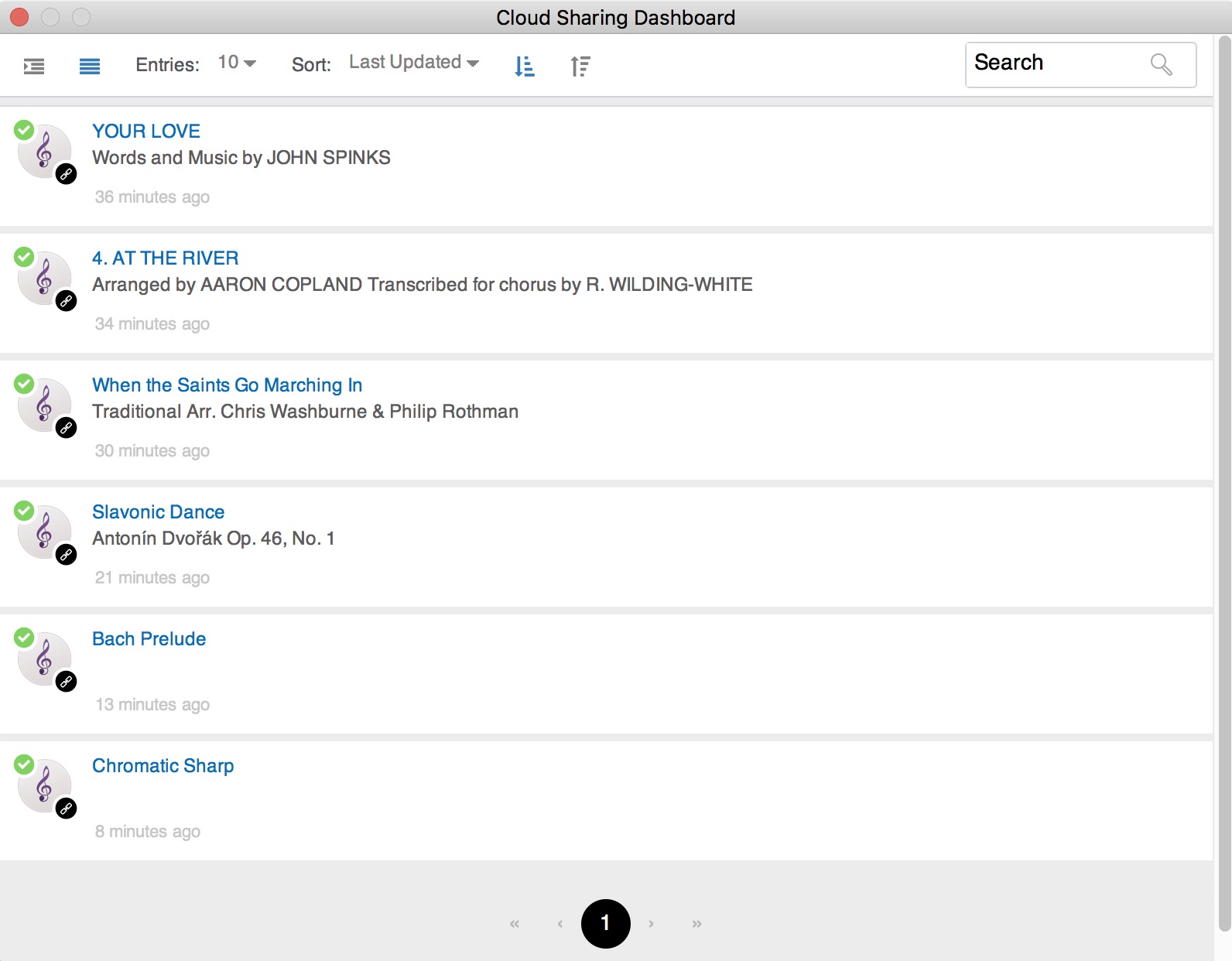 Scores shared online will remain available regardless of whether or not a user’s subscription or upgrade plan has lapsed, although lapsed users will not be able share any new scores until their plan is renewed.

Users of the cloud sharing feature will need to agree to terms of use and a privacy policy before being allowed to share scores. Avid has said that it has worked with the Music Publishers Association in the UK and other groups worldwide to protect against any misuse of the service.

Shared scores are sent to a user’s Avid MediaCentral Platform account (free for Sibelius users with an unlimited number of scores totaling up to 1GB in space; Sibelius First users will get to share up to 20 scores).

Scores shared via various social media sites may display with a preview of the score, and viewers may even be able to play the score directly, like in this tweet:

Sibelius Cloud Sharing is available as part of the 8.7 update. Read about it on @scoringnotes — here’s an example https://t.co/3lwj1ABfgl

Cloud Sharing supports all of the fonts that ship with Sibelius, plus MakeMusic’s Maestro, NYC Music Services’ Norfolk (Bravura derivative), and the standard set of built-in Windows fonts.

Sharing a dynamic Sibelius score with anyone with just a click or two is a really terrific concept. How many times have we gone through the trouble of exporting a file to PDF, making an MP3, sending it via e-mail, then repeating the whole routine when there are any revisions.

However, in practice, Sibelius | Cloud Sharing in Sibelius 8.7 is, for all intents and purposes, very much a version 1.0 (if that) of what is basically a new service running within Sibelius. In testing it I found all sorts of issues with scores not syncing, changes not being pushed, confusion among different versions of the same score or scores created by making a duplicate, and so on. In addition, there are a few rendering bugs that may prevent your score from appearing precisely the way it looks on your desktop, even if you’re using all of the supported fonts (as evidenced in some of the example scores in this post).

For those reasons, if you use Cloud Sharing, I would not recommend that you treat it as a stable service yet. That is not to say it can’t or won’t get there in time, or that you shouldn’t experiment with it and see what’s possible. Try sharing a score, posting it on a blog or social media, and more. Just don’t go and build a huge site with it right now. The good news is that any problems in Cloud Sharing that aren’t a function of the Sibelius application can be remedied by Avid without requiring users download another Sibelius update.

With Cloud Sharing being the new way to share Sibelius files with others, including the wider public without Sibelius, the YouTube, Facebook, and SoundCloud video and audio sharing options first introduced in Sibelius 7.5 have been removed from Sibelius 8.7. 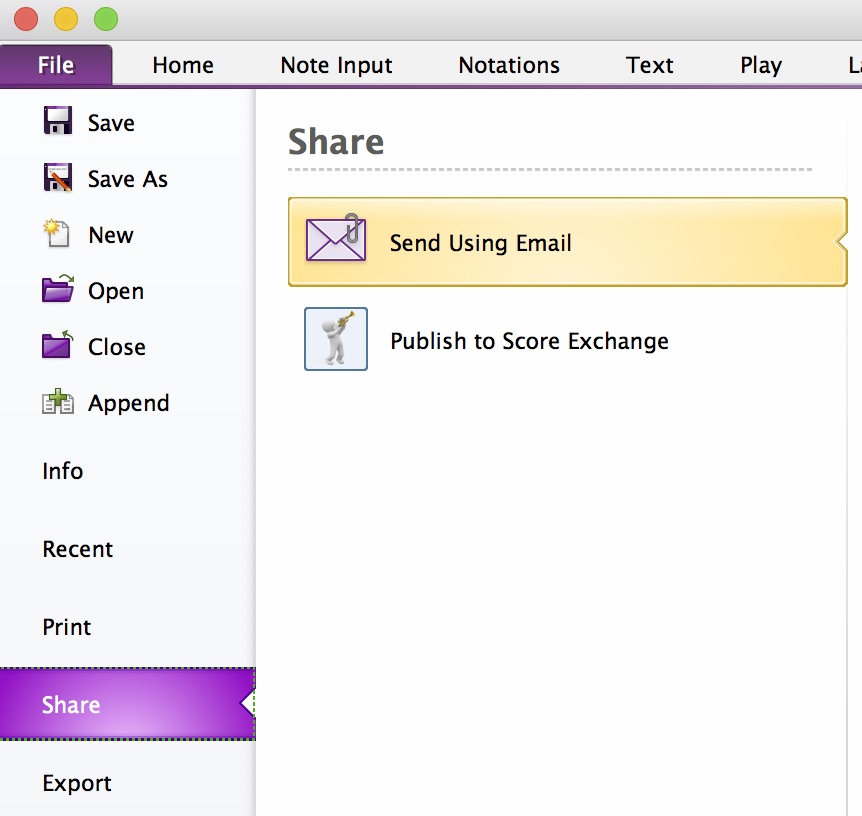 With those companies potentially changing APIs at anytime out of Avid’s control, it makes sense for Avid to not try to keep with with the requirements of those services.

Similarly, with the Scorch browser plug-in being deprecated in favor of Cloud Sharing, File > Export > Scorch Web Page is no longer available in Sibelius 8.7. All Scorch templates have been removed from Sibelius and Sibelius First. Exporting for Avid Scorch (the iPad app) is still possible and actively supported — despite the same name as the Scorch plug-in, Avid Scorch shares that same up-to-date codebase with Sibelius and Sibelius First.

For the moment, it is still possible to export a Sibelius score as a video using File > Export > Video, but I would not be surprised nor saddened to see this dropped in the future.

Sibelius 8.7’s only new feature is Cloud Sharing, but some fixes were made to the rest of the program:

Sibelius 8.7 will overwrite any 8.x version you have on your computer, but will leave other versions intact, unless you tell the installer to uninstall those versions. You also have the separate option of copying supporting files from Sibelius 7.5, if you’re upgrading from that version.

Sibelius 8.7 uses the same file format as Sibelius 8.6. Sibelius 8.6 was a new file format. You can open any earlier Sibelius file in 8.7, but you will not be able to open files saved with 8.7 in versions prior to 8.6, unless you export them first, in File > Export > Previous Version.

If you have Sibelius 8.6 or earlier, you will be prompted to update to Sibelius 8.7 by the Application Manager. It’s free for most users of 8.x unless you bought a monthly subscription plan that has already expired. Application Manager must also be updated to the latest version (17.8) in order for Cloud Sharing to work.

Sibelius 8.7 will run on any 64-bit system running Windows 7 or later or Mac OS 10.9 or later. Various purchase options, including subscriptions, perpetual licenses, and upgrades are available from Avid’s online store and other resellers such as Amazon and Sweetwater.

The RSS feed serving Sibelius plug-in updates has been broken since early last week, leading all users of Sibelius 7...