Today Avid released Sibelius 8.5, a free update for all 8.x users with an active subscription or support plan. Sibelius 8.5’s new engraving feature is one that many users have requested for years: the ability to have different staff sizes for any instrument on a per-system basis.

This new feature is controlled in the Inspector, and so the Inspector has received a bit of a makeover as well — it is the other updated item in 8.5, along with some other minor improvements and bug fixes.

Happily, and quite remarkably, the file format has not changed; Sibelius 8.5 uses the same file format in use since 8.1.

Sibelius 8.4 laid the groundwork for improvements in this area by defining four staff sizes for use — an increase of two from previous versions. This has been retained in Sibelius 8.5. As a reminder, the Normal size is essentially the master size, and the “child sizes” are scaled proportionally to it. The note spacing algorithm is based on the Normal size.

By default, the sizes are set at:

These percentages are still not explicitly exposed to the user, and I hope this will be addressed in a forthcoming update. Instead, the sizes are expressed in absolute values and controlled in the Staff Design area in Appearance > Engraving Rules > Staves.

You can set the staff size of any particular instrument when you set up a score for the first time and click Change Instruments, or access Add or Remove Instruments while working on your score, by selecting the size in the Staff Size column in the Staves in score table. 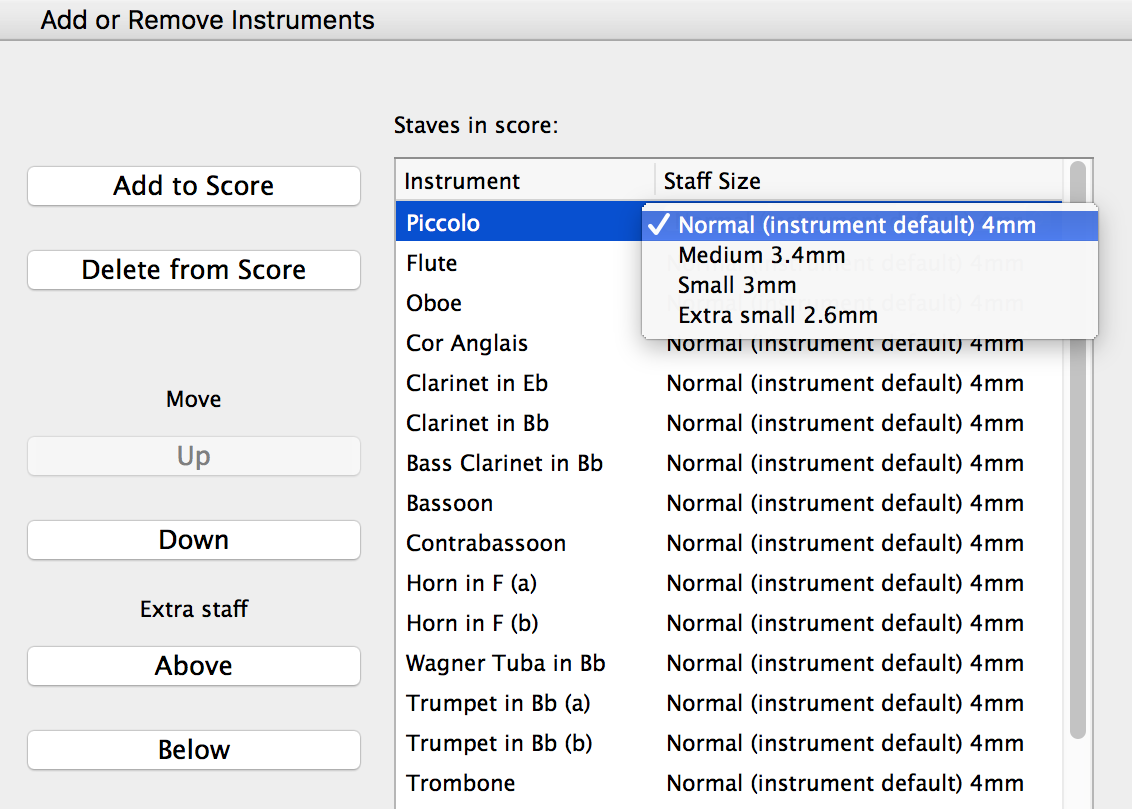 What’s new in 8.5 is that you can override the staff size on a per-system basis by making sure that the Inspector is shown (Home > Inspector or View > Panels > Inspector or Command-Shift-I on Mac or Ctrl+Shift+I on PC) and then selecting the staff, or staves, which you wish to adjust.

Under the Bars section of the Inspector, select the desired staff size: 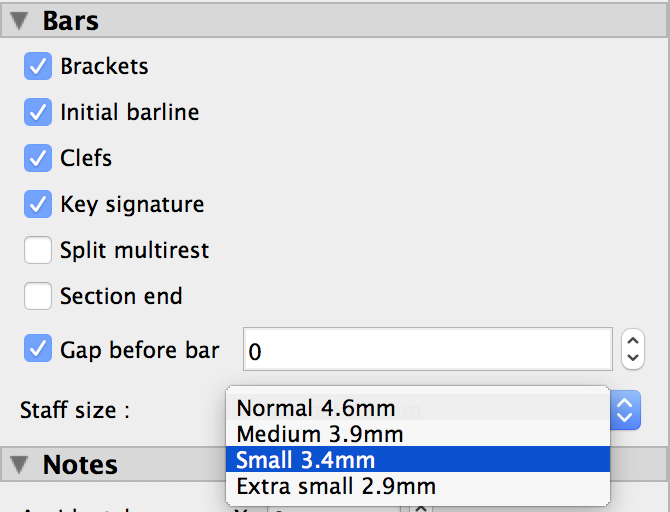 The staff size changes accordingly, for all selected staves: 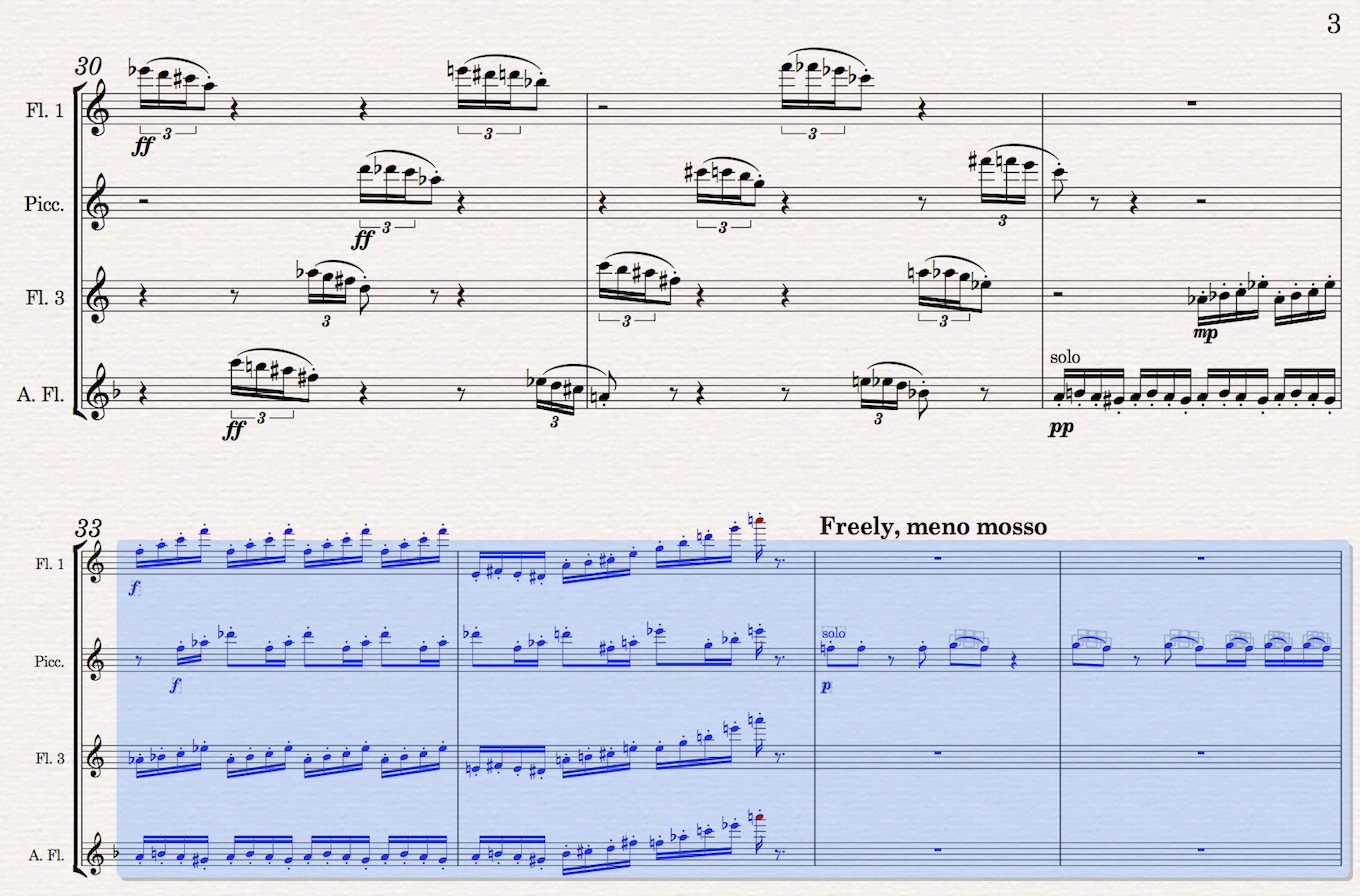 You can change the staff size of one, some, or all the staves on a system, and you can choose more than one instrument/staff at a time. A few peculiarities to keep in mind:

Practically speaking, from a purely aesthetic and good engraving perspective, you probably won’t want to be changing the staff size every system. This feature is probably best used for larger orchestral scores, when, for example, you’ve added an offstage band for one number that increases the number of staves for a particular section or movement. Until now, you’d be forced to choose between reducing your staff size to a value that would be too small for most of the document, or risk vertically overcrowding the section with the added instruments. Most likely, you would have had to split the file in two and re-assemble the PDFs later (which is what I did when I engraved Aaron Copland’s Third Symphony in order to handle the crowded pages at the very end of the piece).

With this new feature in Sibelius 8.5, you can keep everything in the same document — a welcome improvement that brings this aspect of page layout into parity with similar capabilities in Finale and Dorico.

Over on the official Avid blog, senior product manager Sam Butler demonstrates a couple of scores that take advantage of the new feature, including an excerpt from an opera score by Kevin Puts nicely engraved by Bill Holab. (The examples are embedded using Avid’s Sibelius Cloud Publishing technology, which itself has undergone improvements in parallel with Sibelius.)

Finally, it’s worth mentioning that, under-the-hood, Sibelius can support more than four staff sizes. If you import a MusicXML file with more than four staff sizes (like one that can be created in Finale), Sibelius will respect those sizes. However, if you want to adjust those sizes in Sibelius, you’ll be limited to the four set sizes. I hope that a future update to Sibelius will expose these options to be user-facing for the rare but potentially clever engraver who may find them useful.

Among the many interface changes in the 2011 release of Sibelius 7 was the introduction of the Inspector, a re-imagining of the Properties window in previous Sibelius versions, which is where you go to make fine adjustments to your score, control various esoteric playback settings, or (as just described) change other aspects of your layout like staff size and section breaks. Certain elements of the old Properties window found their way to the Ribbon; others were reorganized into the context-sensitive Inspector that floated above your score, appearing when called.

Sibelius 8.5 re-imagines the Inspector again. The changes are positive on the whole, but whether or not you find them beneficial may depend on your personal preference.

For one, the Inspector is now a proper panel that can be accessed via View > Panels > Inspector (it  continues to be accessible in Home > Inspector as well).

The new Inspector is brighter and larger, with more generous proportions, making it easier to read, but some may miss the compactness of the old version (click for larger image):

It’s fully dockable and undockable like many of the other panels such as the Mixer and the Timeline, and it no longer needs to be pinned in order to prevent it from unintentionally closing. Like the other panels, the Inspector can be undocked by dragging it away from its docked location and docked by dragging it back (the left or right side of the score window). Alternatively, double-clicking the Inspector window title bar will toggle its docked status.

Although the Inspector is still context-sensitive, if you wish to re-size its dimensions when undocked, you’ll need to do so manually, lest you be left with large swaths of empty space:

The Inspector retains all the capabilities of its predecessor, and gains a few text styling and horizontal alignment functions that were previously only available on the Ribbon (they’re still there as well). 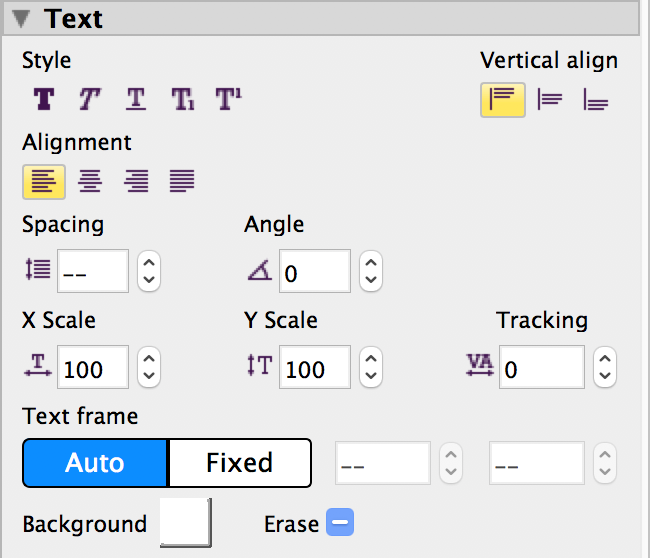 Other improvements and bug fixes

Sibelius 8.5 will overwrite any 8.x version you have on your computer, but will leave other versions intact, unless you tell the installer to uninstall those versions. You also have the separate option of copying supporting files from Sibelius 7.5, if you’re upgrading from that version.

If you have Sibelius 8.4 or earlier, you will be prompted to update to Sibelius 8.5 by the Application Manager. It’s free for most users of 8.x unless you bought a monthly subscription plan that has already expired.

Sibelius 8.5 will run on any 64-bit system running Windows 7 or later or Mac OS 10.9 or later. Various purchase options, including subscriptions, perpetual licenses, and upgrades are available from Avid’s online store and other resellers such as Amazon and Sweetwater.

Avid’s Scorch iPad app for Sibelius files and the newly released Sibelius First have been updated as well, to support the new staff size feature.