Today Avid released Sibelius 8.2. As with other 8.x releases, it is a free update for all 8.x users with an active license (virtually anyone with Sibelius 8.x other than those who may have had a month-to-month subscription).

About the new release, Sibelius senior product manager Sam Butler said, “[Sibelius product designer] Joe Pearson and I are really pleased with the features included in 8.2. Some of these came from direct conversations with Sibelius customers on the forums, beta testers, tweets and customer visits. The new feature to allow you to have independent spellings for your accidentals in score and parts came from our meetings with the engravers and orchestrators at Joann Kane Music Service and Patrick Kirst, Hollywood film score composer, in January this year while we were in Los Angeles for the annual NAMM show, who both had this feature at the top of their wish lists.”

As previewed late last week on several web sites including Avid’s own site, the main new features in Sibelius 8.2 are:

There are a couple of other nice improvements, as well:

Let’s dive in and check out the new features.

It’s hard to believe that dynamic parts — parts which retain their relationship to the score in the same file, while allowing for formatting and layout differences — have been around for more than ten years, since the release of Sibelius 4 in 2005.

Finale 2007 (released in 2006) followed with its similar linked parts feature, and the feature set between the two programs in this area has been generally comparable since that time. The two main advantages that Finale users had over Sibelius users in this area were voiced parts and the ability to spell a note independently in a part compared to the score.

With today’s update, Sibelius 8.2 brings parity to the latter of those two features. This is very welcome news if you work with concert scores where spelling can vary quite significantly in a transposed part: 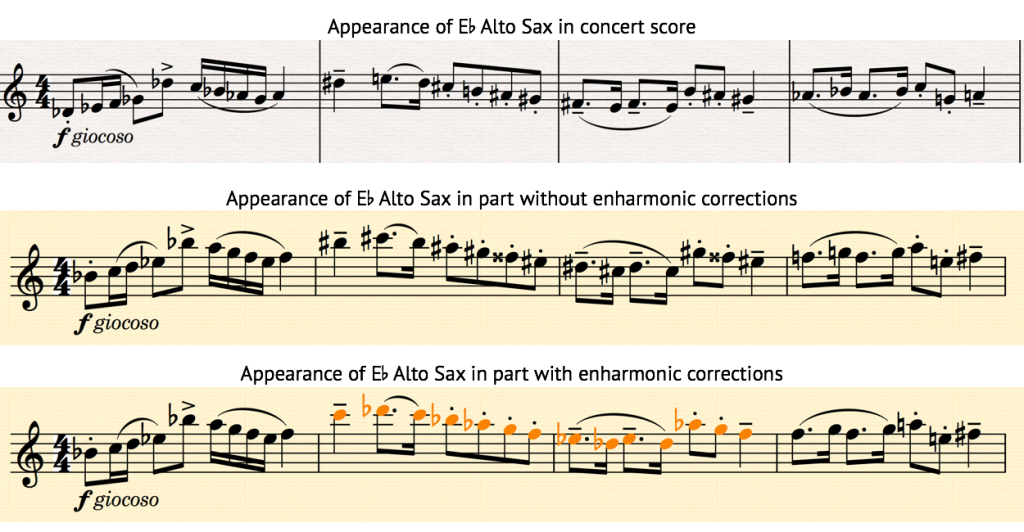 This is achieved quite simply by selecting a note or a passage of notes and pressing Return on the main keyboard (or, the long way, by going to Note Input > Note Input > Respell in the Ribbon). This works as it did before, of course, but the difference now is that if you respell a note while in the part, the spelling changes only for that part, and not for the score — or, for that matter, other parts that may be using the the same staff.

The latter point is actually important. You might, for instance, have a band score that has a euphonium in concert pitch, and parts for both a euphonium and a baritone horn, which is transposed at the major 9th. It is possible now to respell a note in the baritone horn part while leaving both the score and the euphonium part unchanged.

As demonstrated in the example above, it is quite easy to tell which notes have been enharmonically adjusted. They are turned orange, like other differences between the part and the score, if View > Invisibles > Differences In Parts is checked.

Notice how even the courtesy accidentals are correct in the last bar in all three examples above.

Should you wish to reset the part to its original spelling, go to Appearance > Design and Position > Reset Design (shortcut Command-Shift-D on Mac or Ctrl+Shift+D on PC).

Note that, if you use a plug-in such as Respell Sharps as Flats or Respell Flats as Sharps, the plug-in will not have the same effect as this new feature, even if you run the plug-in while in a part. Also note that when a Sibelius 8.2 score is exported to an earlier version, any enharmonically modified notes in a part will revert to their default state.

For me, at least, this feature is the most useful engraving achievement in any of the Sibelius 8 releases so far, more so than even the magnetic rests feature. It’s not groundbreaking by any means — after all, it’s been around in Finale for nearly a decade — but it’s really the only improvement for which there has been no simple workaround (the only one I know of involves laboriously creating creative instrument changes in a part). It works as expected and is simple to use because it builds on how we already expect dynamic parts to work — kudos to the Sibelius team on introducing this feature.

It’s debatable whether this qualifies as a new feature or a bug fix, but no matter, it’s an improvement. It’s long been a pet peeve for many a Sibelius user that, when creating a start repeat barline that coincided with a time signature (like commonly at the beginning of a piece), the barline preceded the time signature instead of the other way around. Bob Zawalich even created a plug-in, Move Time Sig Repeat Barline, to deal with this annoyance.

Now, in Sibelius 8.2, the order of these items is correct by default.

Likewise, you can export any scores with the new layout to an earlier version of Sibelius and it will maintain the updated repeat and time signature placement.

Sibelius 8.2 has not officially been made available, but details about its new features have already appeared on Avid's web...