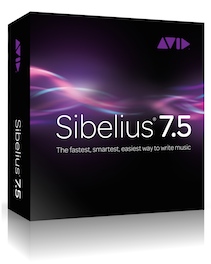 Today Avid released Sibelius 7.5. Announced last month, the release is the first major upgrade to Sibelius in more than two and a half years and the first update of any kind to Sibelius since September 2012.

Sibelius 7.5 offers improvements in the areas of navigation, performance, playback, sharing, and social media. A detailed overview of the new features is available elsewhere on this blog.

Generally, in the final testing build of 7.5.0 that I used, Sibelius was stable and works as advertised on my Mac Pro (Late 2013) running Mac OS X 10.9.2 (Mavericks). The font in the text menus (on Mac) is the normal Lucida Grande, and I had no problems running Sibelius as a ReWire slave in Logic Pro X.

Some areas of 7.5.0 are a little rough or could benefit from more explanation, and so I wanted to review them here.

As I wrote previously, the Timeline is an excellent improvement and performs well when you want it, and can be closed when you don’t.

However, it’s not explicitly clear which items end up on which lane. I discovered that the lane in which system text appears in the Timeline is dependent upon its definition in Play > Interpretation > Dictionary.

By default, it will be represented as follows in the Timeline:

However, if I add a metronome mark to the text object, “Majestically” will now appear in Tempo Markings:

Here is a chart of the various effects as defined in the Dictionary and their corresponding lanes in the Timeline:

You may have noticed that, strangely, you can’t define “rit.” to both have a Rit./Accel. effect and also have it appear in the Tempo Markings lane in the Timeline. Yet “a tempo” will appear in that lane.

Hopefully a future update or upgrade will be both more sensible by default and give users the option to more easily control how items appear in the Timeline. For now, if you want, say, everything entered in the Tempo text style to appear in the Tempo Markings lane in the Timeline, you’ll have to define them accordingly in the Dictionary if they haven’t already been defined.

While we’re on the subject of the Dictionary, as I mentioned last month, you can set Rhythmic Feels on a staff-by-staff basis. However, if you have a swing chart and you wish to have a drummer play ahead of the beat by typing the Technique text “ahead”, you’ll also need to set Swing (ticks) to match that of your master tempo; otherwise, you’ll have a very square drummer (because by default “ahead” is set to have a straight-eighth feel).

This is because your Effect Values are an all-or-nothing affair. It would be better if the various Effect Values could be individually enabled; perhaps one day they will be.

You may notice some strange looking items in the list: 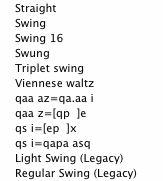 No, you weren’t asleep in music theory class the day they taught what “qaa z=[qp ]e” meant. These are actually plain-text renderings of the Opus Metronome font. Perhaps one day the menus will be able to render this properly, but for now, here’s a translation guide: 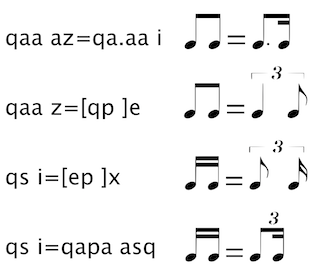 Another performance issue: In my review from last month I described how mordents, trills and turns placed as symbols now back correctly in Sibelius 7.5, and gave the example that a passage notated as:

Will play back as:

I believe the example I gave is correct in illustrating how the music should be played back; in the testing version of 7.5, however, Sibelius was reversing the mordent and the inverted mordent during playback. Strangely, the definitions appear to be correct in Play > Interpretation > Dictionary > Symbols. Hopefully this is a bug that can be easily corrected.

Other than that, the new performance features are certainly worth exploring and experimenting with. Avid’s Joe Pearson has a nice write-up, with comparison examples, on the official Avid Blogs Sibelius.

With all the new playback and sharing improvements in Sibelius 7.5, there is one major problem that undermines these features for the moment. Exporting (and sharing) audio and video in File > Export or File > Share is happening in real-time, not off-line.

That means that if your piece is 20 minutes long, it will take 20 minutes to create the audio file of it, instead of a fraction of the time you were accustomed to it taking in earlier versions. I’ve been assured by Avid that fixing this issue is the highest priority, so hopefully it will soon be corrected in a forthcoming update.

Regarding sharing: In Sam Butler’s post from a few weeks ago, he nicely described the new sharing options to YouTube, Facebook and SoundCloud. When you share your music to those services, the file is transmitted directly to the respective service.

When you send an e-mail using Sibelius 7.5’s Send Using Email feature, the e-mail is sent using Avid’s servers. Avid’s Joe Pearson told me that “the connection is encrypted using industry-standard SSL.” In addition, Joe said that “we do not log anything unless something goes wrong (i.e., an error of some sort). In this case, we need to log the data so that we can fix it. The only time we store a user’s e-mail address is if they choose to be blacklisted. Their e-mail address is then stored in a list which is consulted every time someone sends an e-mail from Sibelius.”

Keep in mind that once the data leaves Avid’s servers, it is transported using whichever transport method your e-mail provider uses and could be totally unencrypted, just like any other e-mail.

Joe further said that “we’re very concerned about customer data protection, and of course we’re governed by the same rules and laws as everyone else. We never look at any messages that are being sent, nor do we harvest e-mail addresses.”

The e-mail you send will contain embedded links to the Avid home page, as well as product pages for Sibelius 7.5 and Avid Scorch: 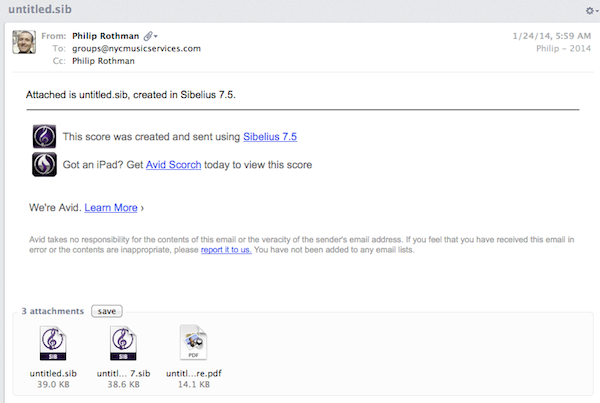 You might try sending a test e-mail to yourself to see if you are comfortable with how the e-mail appears, as well as the limited information that Avid may log, before using the feature to collaborate with others.

Sam Butler noted that “The e-mail address you enter to send from is kept in Sibelius so you don’t have to type that in every time; that’s local to your machine. It’s kept in the ~/Library/Preferences file.”

Although not officially supported, this seemed to work. Do at your own risk.

Earlier this week, Apple issued Mac OS X 10.9.2, which fixed the performance issues when using Sibelius 7.1.3 in Mavericks. Avid senior product manager Sam Butler told me that there are no plans to remedy the cosmetic font display issue in the Ribbon and dialogs that affects Sibelius users running Mavericks on a Mac. The other outstanding 7.1.3 issue in Mavericks, ReWire compatibility, appears to not be a problem as long as the audio bus in the host is set correctly.

The first release of just about any major update of complex music software like Sibelius usually exhibits a few issues that are corrected in subsequent patches. Early adopters are rewarded by being the first to take advantage of the newest features, but with those rewards comes some risks. In the case of Sibelius 7.5, the risks are relatively minor, and they are mitigated further by the option presented upon installation to allow 7.1.3 to remain on your machine.

Existing Sibelius users can purchase and download the Sibelius 7.5 upgrade from Avid’s site. Upgrade pricing is dependent upon the latest version of Sibelius you have and where you live. Sibelius 7 users will see a less expensive upgrade than users of Sibelius 6 or earlier (in the US, $50 or $150, respectively).

A 30-day trial of Sibelius 7.5 may also be downloaded if you don’t want to fully commit quite just yet.

Sibelius 7.5 is available as a download or on DVD media. Sam Butler said that Avid is still in the process of stocking up the online store in some regions. Users preferring to purchase the physical box and finding it’s temporarily unavailable should see stock appearing beginning March 3.

The brand new five-part “Get Started Fast with Avid Sibelius 7.5” video tutorial series is designed mostly for those new...

The thorough review of the new features in the much-anticipated upgrade to Avid's flagship music notation software, with improvements in...