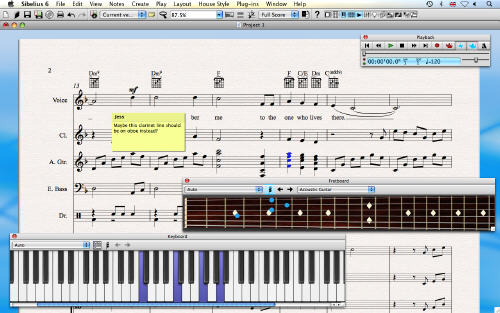 I’m delighted to be able to share the happy news that Sibelius 6 is now available! We’re incredibly proud of the new version, and we’re really looking forward to hearing from our users about it.

Some of the highlights of the new version:

Over the coming days, I’ll be sharing some of the story about how Sibelius 6 was put together, and drawing attention to some of the smaller improvements that might otherwise get lost in the hullabaloo about the many major new features in this version.

For now, though, you should go and download the demo version (which is fully functional, but cannot save or print more than one page, and does not include the sample library). If you already have an earlier version of Sibelius, you can order your upgrade for shipping in the next week or two. If you are new to Sibelius, buy your copy today!

The latest issue of Computer Music magazine includes a review of Sibelius 6, which once again receives a perfect 10/10...

The August 2009 issue of Music Tech magazine includes a glowing review of Sibelius 6 from writer Keith Gemmell, who...

Since the launch of Sibelius 6 this past Tuesday, I’ve been delighted to see such an enthusiastic response to the...