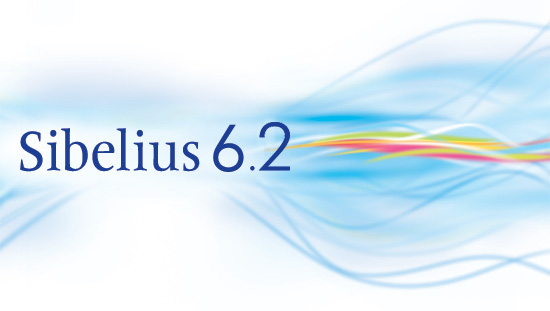 An update to Sibelius 6.2 is now available free of charge as a download for existing Sibelius 6 users. This is a maintenance release that includes a number of important fixes, and also a small handful of interesting improvements. Perhaps most significantly, Sibelius 6.2 is now a multi-lingual application, allowing you to choose whether you run in English, French, German, Italian, Japanese or Spanish by changing an option in Preferences. It also allows educational users with network site licenses to temporarily “check out” licenses from their Licence Server onto teacher and student computers for up to a year, which is very useful for homework assignments or allowing students to use a school’s copies of Sibelius at home over the holidays.

If you’re interested in more information about these and some of the other changes in this version, read on after the jump. Otherwise, if you have Sibelius 6 and just want to get your hands on the latest and greatest, simply choose Help > Check For Updates within Sibelius itself to be directed to the appropriate page on the Sibelius web site.

Sibelius has long been available in a variety of European languages, plus Japanese, but until now, each language version required a separate installer, so it was difficult for multi-lingual users to be able to switch between, say, the German and English versions of Sibelius. With Sibelius 6.2, changing the language of your copy of Sibelius is as simple as going to the new Language page of File > Preferences (in the Sibelius menu on Mac) and choosing a new language: 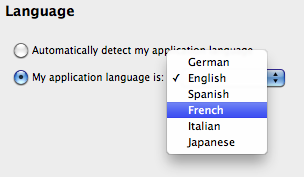 Our intention is future versions of Sibelius will be released simultaneously in all supported languages, and that all languages will be available to all customers.

Sibelius 6.2 makes it very easy for schools running the network version of Sibelius 6 to allow teachers and students to “check out” licenses from the Licence Server onto their personal computers for a limited time, so that they can take a copy of Sibelius away from the school network (e.g. to use at home) for a limited period of time, up to a year.

If you are using the Sibelius Licence Server, you have a pool of floating licenses, which allow you to run Sibelius on a certain number of machines at the same time: you might have a license for 30 seats, allowing you to install Sibelius on an effectively unlimited number of computers, but only run it on up to 30 computers at once, all managed automatically by the Licence Server. This is very convenient, but it does mean that Sibelius has to be able to connect to the Licence Server periodically as it runs, to check that the Licence Server is still reachable, and that it is allowed to keep running.

A common request, however, is for a teacher or a student to be able to take a copy of Sibelius home for the weekend or over the holidays for lesson preparation or homework, and with a network version of Sibelius this has been practically impossible.

Sibelius 6.2 changes all that: you can check out a licence from the Licence Server to an individual computer, effectively reducing the number of computers that Sibelius can run on simultaneously in the school by one, and then disconnect that computer from the network for the duration of the license period. For example, as a teacher you could bring your laptop into school, connect to the school license server, choose Help > Check Out Licence from within Sibelius, choose to check out a license for, say, two weeks (to cover the spring term holiday), and then simply unplug your computer from the school network, and take it home.

For that two week period, you can run Sibelius on your home computer as if it were still connected to the school network, and when the license period expires, Sibelius will no longer run without requiring reconnection to the Licence Server. In the meantime, the school license of Sibelius effectively has one fewer license available than normal, until the checked out license is returned back to the pool of available licenses.

One long-standing complaint from people who use Sibelius to set vocal or choral music in languages other than English is that Sibelius allows lyric hyphens between syllables to disappear when there is insufficient room for the hyphen to appear without colliding with the syllable on either side. This is a useful standard behaviour for the English language, in which allowing hyphens to disappear when two syllables are sufficiently close together is a commonly-used convention in vocal and choral music.

However, in some languages, the presence or absence of a hyphen can change the pronunciation or even change the meaning of the lyrics, so it has long been requested that Sibelius have an option to prevent hyphens from disappearing when lyrics get too close together.

Sibelius 6.2 adds this option: simply switch off Hyphens allowed to disappear when syllables are too close together, on the Text page of House Style > Engraving Rules.

This update also includes a number of improvements to lyric spacing and the positioning of hyphens on small staves.

One of the common questions we are asked is about ensuring that the music uses an appropriate page and staff size for the number of staves in a system. We have now added some intelligence to Sibelius that allows it to detect when the staves will either be much too large or much too small to be legible, or when the page will appear too cramped or too empty, and offer to make some adjustments for you. When you add or remove a sufficient number of instruments via the Create > Instruments dialog to cause a substantial change in page layout, Sibelius will ask you whether you would like it to adjust the page and/or staff size automatically to produce a more pleasing layout. (You can, of course, disable this behaviour if you want.)

Sibelius will only snap staff sizes to the traditional rastral sizes used in plate engravings, and will only change the page size to one of the standard page sizes, dictated by your choice of European or US page sizes (as specified in Preferences).

Sibelius will also perform the same operation when importing a score from PhotoScore or a MIDI file, to try and ensure that the default page layout you see upon importing such a file is as good and useful as possible.

Sibelius is now supplied with OpenType versions of its four music font families, Opus, Helsinki, Inkpen2 and Reprise, on Mac. (Windows’s support for OpenType fonts with PostScript outlines does not provide sufficiently accurate measurement and placement of symbols on-screen to allow us to recommend their use on Windows just yet.)

We have switched to using OpenType fonts because this is the preferred format for fonts on the most recent versions of Mac OS X, and the previous font format used by our fonts (the data fork TrueType font format, identified by the file extension .dfont) is now effectively deprecated by Apple.

One good benefit of this is that we have now improved Sibelius’s EPS export feature to allow the embedding not only of Sibelius’s own OpenType fonts, but also most other OpenType fonts. It’s worth noting, however, that there are quite a few sub-formats covered by the OpenType specification, and it’s possible that some of these sub-formats may not be embedded correctly in all cases.

If you run Sibelius 6 and Sibelius 5 or 4 on the same Mac, you should check out this information about font compatibility between new and older versions of Sibelius.

…and much more besides

Sibelius 6.2 contains well over two hundred fixes and improvements (read the complete list) and is recommended for all Sibelius 6 users. You can download the full Sibelius 6.2 installer by choosing Help > Check For Updates, or by going here. (Note that this installer can only be downloaded by customers who have already bought or upgraded to Sibelius 6: you will be required to enter your Sibelius serial number in order to obtain the download.)

Update –- 26 April 2011 Apple have released a fix for this problem, which is available now from Software Update....

If your school, university or other educational institution has a site license for Sibelius and you’re thinking about upgrading to...