With the arrival of autumn comes the release of Sibelius 2021.9, Avid’s first update to the desktop version of Sibelius since 2021.2 was released in February of this year. We say the “desktop” version (aka “big” Sibelius) because in the interim, we saw Sibelius for Mobile on iPad burst out onto the scene a couple of months ago.

If you haven’t yet heard about Sibelius on iPad, that’s understandable — living under a rock has a certain appeal — so be sure to check out our full coverage of July’s release, which includes a video overview. On our Scoring Notes podcast, we discussed the release as part of that wild week, which also saw Dorico for iPad come out just 24 hours earlier, and we had a conversation with Avid’s Sam Butler and Joe Plazak all about the product’s development, its features, and future.

I mention the iPad version of Sibelius in this preamble to the 2021.9 coverage because this update is the first of presumably many in which we will see features that appear on the iPad make their way back to the desktop, and vice versa. So even if you don’t have an iPad, it’s important to understand the context in which some Sibelius development is happening.

With that said, 2021.9 is mostly a workmanlike update when viewed strictly through the lens of the desktop product, with updates in the areas of searching, the Keypad, ManuScript, and a handful of other areas.

The 2021.9 improvement that will likely benefit Sibelius users the most is the addition of a search bar to the seemingly endless galleries for text styles, lines, and symbols (and the comparatively smaller galleries for clefs and key signatures, too).

Galleries were introduced ten years ago in Sibelius 7 as part of that version’s overhaul, which featured the Ribbon for the first time.

Finding a needle in a haystack, though, was a simple endeavor compared to finding the music notation object you needed in one of these galleries:

Finally, there is an easier way, thanks to the improvement introduced in the 2021.9 release. All galleries are now outfitted with a search bar into which you can type the name of the object you’re looking for.

As you type, the results narrow in real time. In most instances, this should make it nearly infinitely easier to locate a symbol, text style, or line.

From there, you can Tab or use the arrow keys to make your selection and press Return to apply it to your score.

If you’re a plug-in aficionado, the search bar appears there, too: 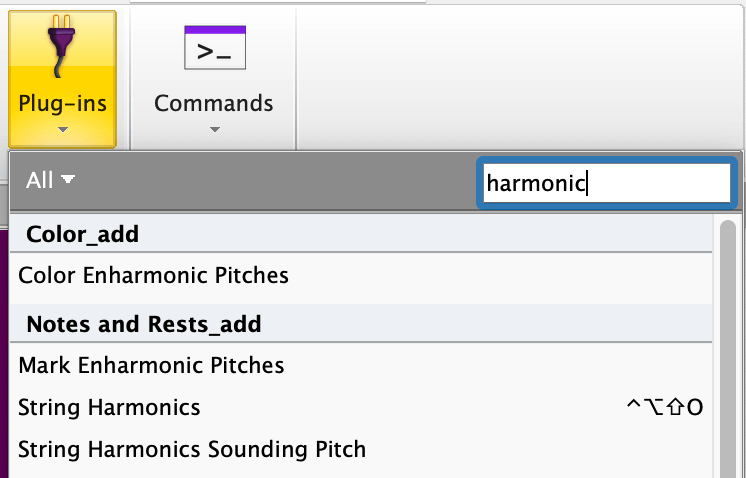 If you have hundreds of plug-ins like I do, you’re probably already using Bob Zawalich’s Run Plugins by Name or My Plugins, but this addition of the search bar is a nice way to find plug-ins without first running another plug-in to do so.

The improved search feature doubles back to the Commands gallery, which was introduced in Sibelius 2021.2 as a way of exposing all of the available scriptable commands in a searchable list. 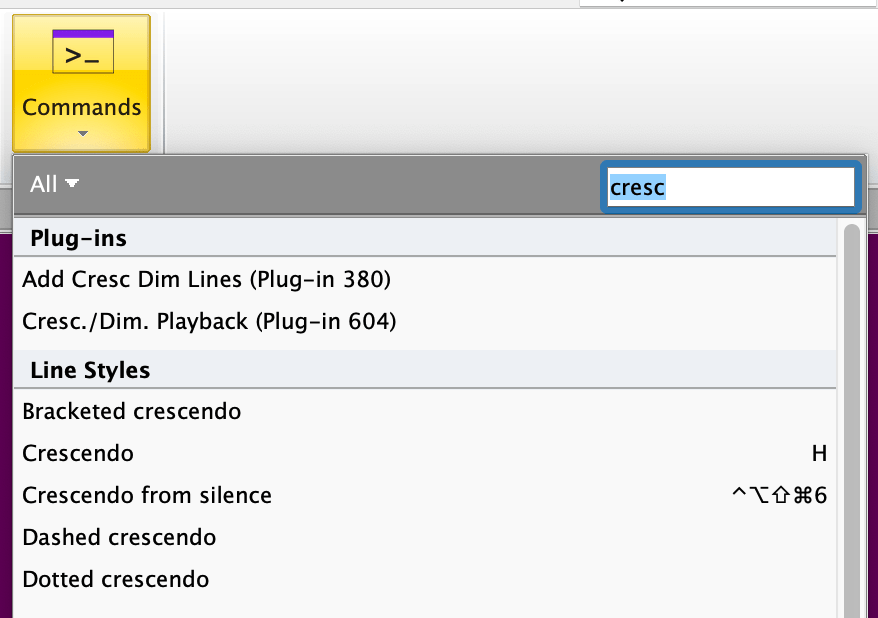 This is nice, but if you’re a real glutton for punishment — er, power user — you’ll be excited that the text, line, and clef styles (yes, in Sibelius, behind the scenes, a clef is a “style”) are now available to use in Sibelius.Execute(), which allows a plug-in to run a command on the current selection.

The new command is (drumroll, please…): Sibelius.FindStyleID() and its alias is simply: StyleCmd()

Recall that, since 2021.2, a plug-in can include a series of Sibelius.Execute() calls, and thus run them all as a single action. You can run any command via this method, either by using Sibelius’s internal name (called a “Command ID”), which is common to all localizations (language version) of Sibelius, or by using the command name you see in the menu, which will only work in that localization.

For example, to apply a crescendo, you could write this, which will work in all localizations:

Or, if you’re only working in the English version of Sibelius, you could write:

Note how Crescendo is the name that appears in the Commands gallery — that’s the name you would use if you used the StyleCmd() method.

If you want to learn all about this, read Bob Zawalich’s extensive article Command Macros, Command Plug-ins, and cmdutils for Sibelius.

Bob and I actually posited in February that applying text and lines would be possible through this method in a contrived example that included applying a dashed slur. Although that wasn’t available to us in Sibelius 2021.2, in 2021.9, it’s now possible to apply that final step in the process. 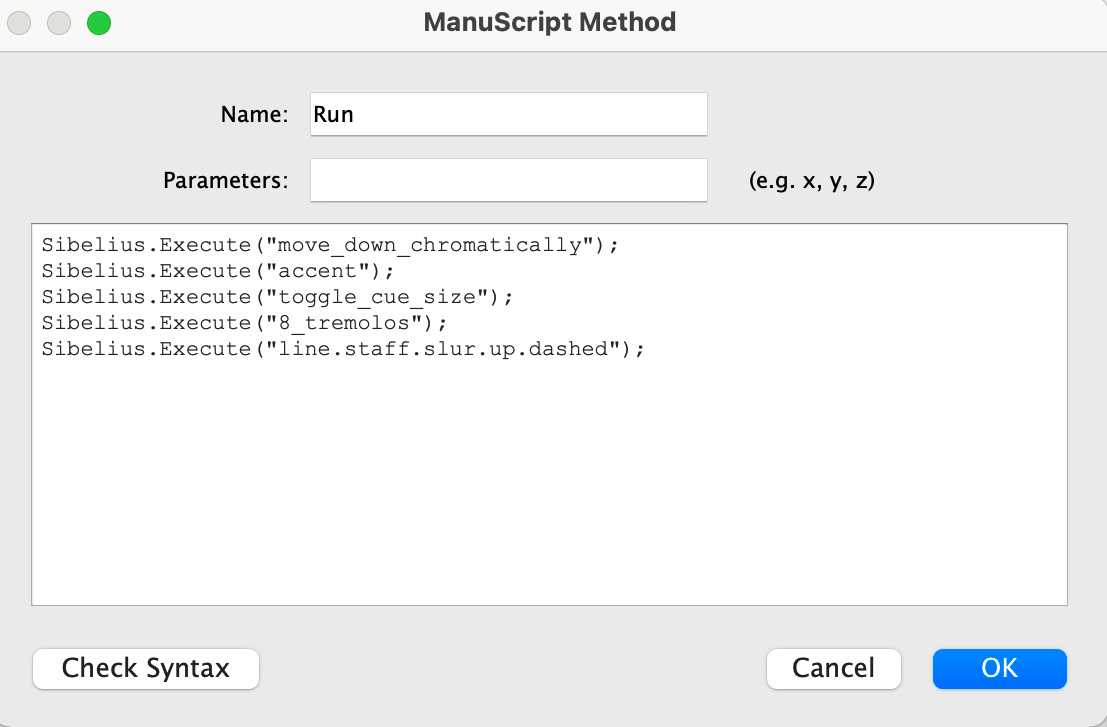 If all of this makes your head hurt, let’s back out to the larger picture for a moment.

Bear in mind that this manner of controlling Sibelius is essential to how Sibelius on iPad works. To be sure, there are lots of implications for scripting and searching on the desktop, but in order to access the huge number of powerful Sibelius commands in a compact mobile environment, this is how it’s done behind the scenes. This is one of those instances where iPad development is more than what it may seem at a surface level (unintentional pun there).

Avid’s Joe Plazak told us on the podcast that the iPad app was “just a part of a larger project that we’re putting together — you’re going to see what it is in time. And I just want everybody to know that what you see with Sibelius for Mobile… is just the start of a much bigger, much more exciting story that we have to tell, and it is possible to imagine where this could go in the future.”

One obvious way that iPad development has influenced the Sibelius 2021.9 release is in the “friendly neighborhood Keypad”, as my podcast co-host David MacDonald likes to say.

If you followed the iPad news, you learned about multidimensional gesture support, which is a fancy way of saying that you can tap and hold a key on the Keypad. On the iPad, you drag your finger up or down to raise or lower the pitch by step, and drag your finger left or right on the rests key to adjust the duration.

You also learned about a couple of buttons in place of the familiar plus or minus buttons: a Pitch Correction Tool and a Chord Input Tool to help after you input a note.

Dragging the Pitch Correction Tool up or down will adjust the note in those directions, while dragging it left or right will add accidentals.

The Chord Input Tool adds an interval of a third above if you simply tap it. But if you hold and drag it first, you can use it the same way you input a single note. 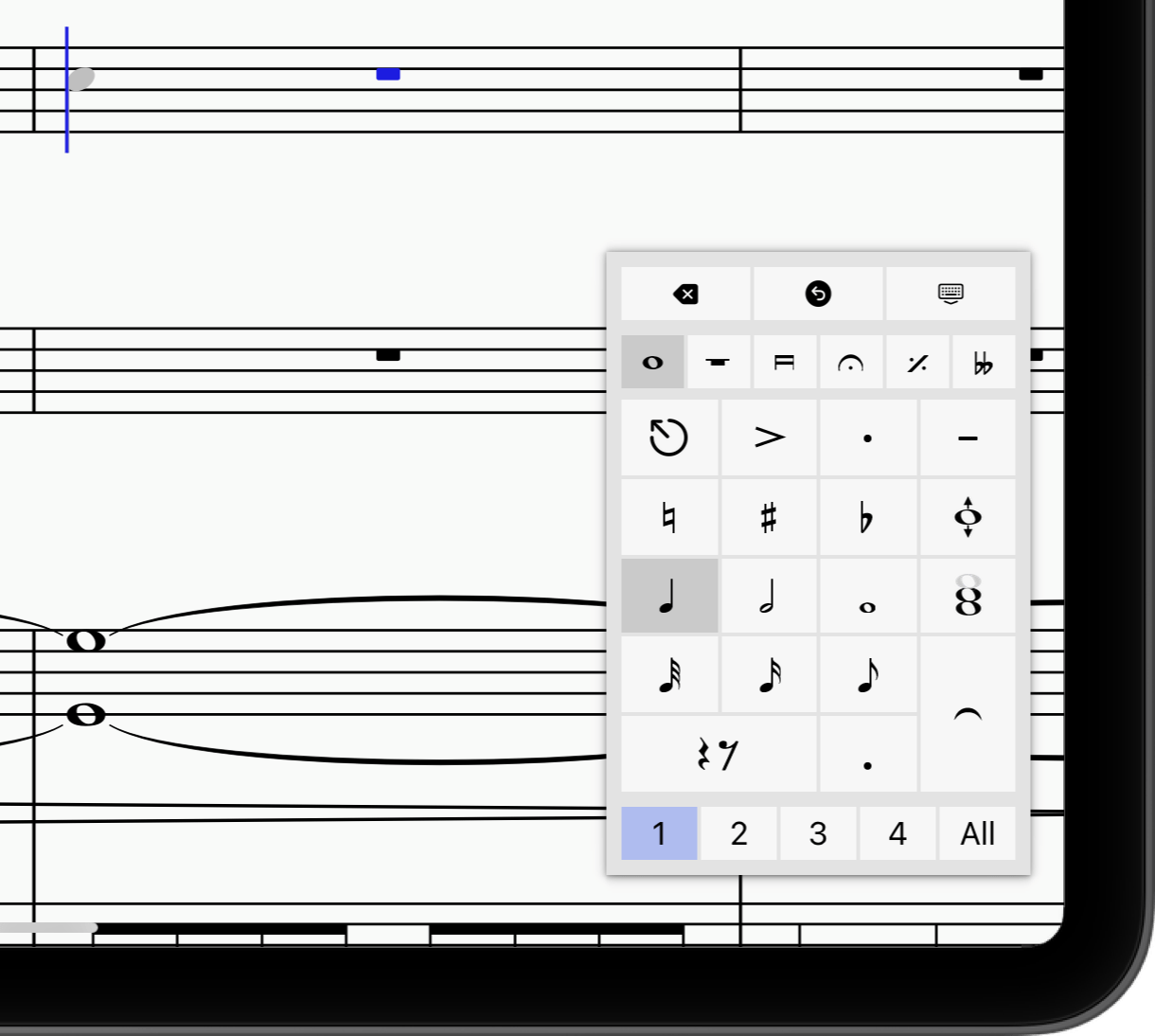 You should be, because it works the same way. Now, let’s face it, using the tried-and-true keystrokes to enter music on the desktop is going to be far preferable to clicking, holding, and dragging. This is one of those areas where the ways of working on a mobile device and a desktop clearly diverge. But we did speculate that Windows Surface users using the Surface Pen would benefit from these iPad-like methods once they were made available to the desktop version, and sure enough, here they are. It also works with macOS and Sidecar, if you’re using your iPad as a second display for your desktop.

One nicety that users might enjoy is a new way to access quarter tone and double accidentals using this method. If you use the Pitch Correction Tool or Chord Input Tool, and hold Alt (or Opt on Mac), you’ll get access to an additional range of accidentals.

If I just drag without holding Alt, I’m limited to just ordinary flat and sharp (and natural):

But when holding Alt, it’s no accident; there’s lots more:

A final observation: The Pitch Correction Tool or Chord Input Tool doesn’t change the + (plus) and – (minus) keystrokes used to cycle through Keypad layouts. The old “forward” and “backward” icons appear to help remind you of this, but they’re now just much smaller on the first two Keypad layouts.

Avid has created this handy graphic, summarizing it all: 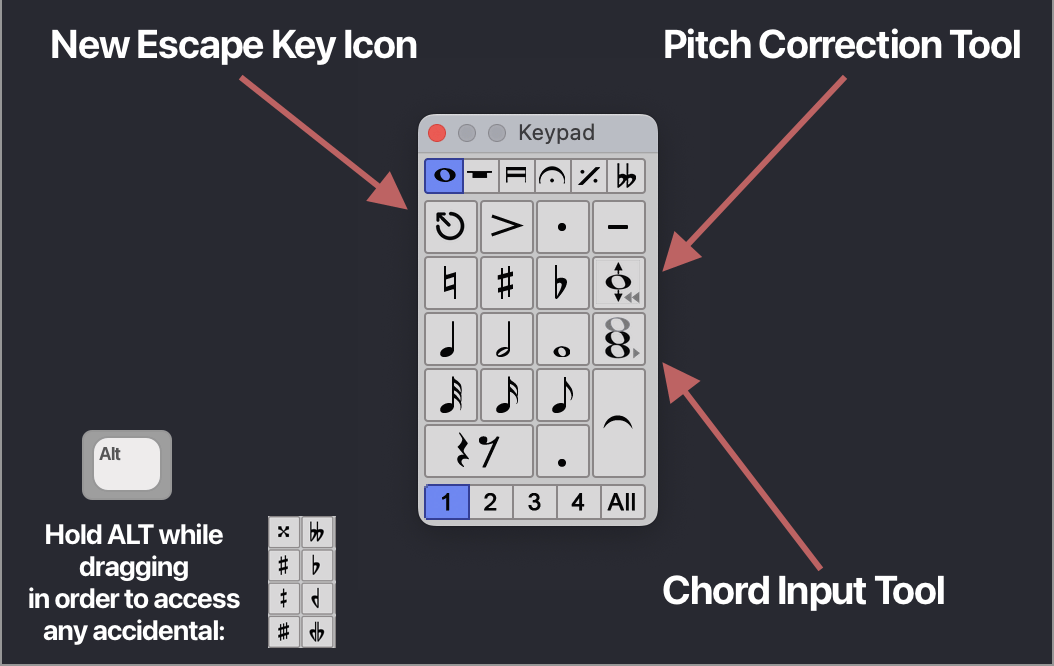 Most notable among the other changes and improvements in Sibelius 2021.9 are:

Exporting to Scorch has been removed, since the Scorch application is no more. However, the options to export a score with different margins has been retained. You’ll find it in File > Export > PDF, under Settings, with the option Optimize page margins for tablets. 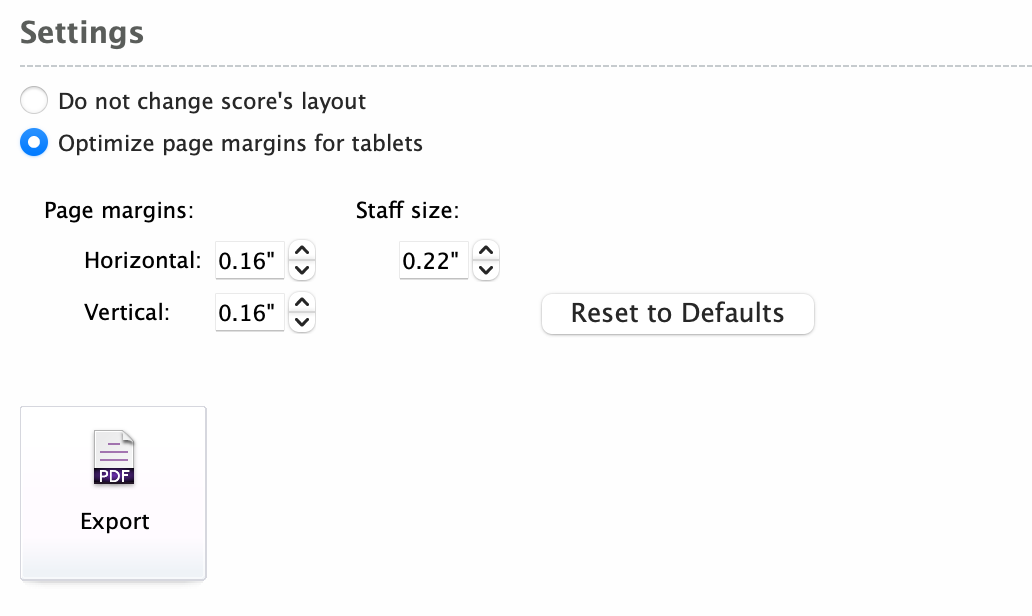 If you use Sibelius’s video features, you may have noticed that since 2018.11, syncing has not been as reliable — the picture would drift. This is corrected in 2021.9.

If you enjoyed the new example scores in the iPad version of Sibelius, you’ll find them when you install Sibelius 2021.9. They are:

However, the new Manuscript Papers introduced in the iPad version have not yet made their way to desktop Sibelius. (Shameless plug for Scoring Express to the rescue!)

A handful of bug fixes are in Sibelius 2021.9; see the official Avid blog post for further details.

The Sibelius 2021.9 update is free for all Sibelius users with active subscriptions and upgrade plans. The updated installers are available through users’ Avid accounts and through Avid Link.

Avid also has a “What’s New in Sibelius” page highlighting the features in recent Sibelius updates.

Sibelius has come to the iPhone, with all of the same features that appear on the iPad version. Panorama view...