Today Avid released Sibelius 2019.5, its latest update to Sibelius. Coming about one month after the 2019.4 update, today’s release contains no new features, but it brings a number of important improvements and fixes mostly in the areas of audio, playback, and printing, which makes some of the recent features more usable.

Looping playback, introduced for the first time in Sibelius 2019.4, was a nice new feature to see. It’s accessed in the Transport (found in View > Panels); you can also access the setting from the Ribbon at Play > Transport > Play > Loop, or via a new shortcut: Option-P (Mac) or Alt+P (Windows), and you can read more about how it works in our 2019.4 review. 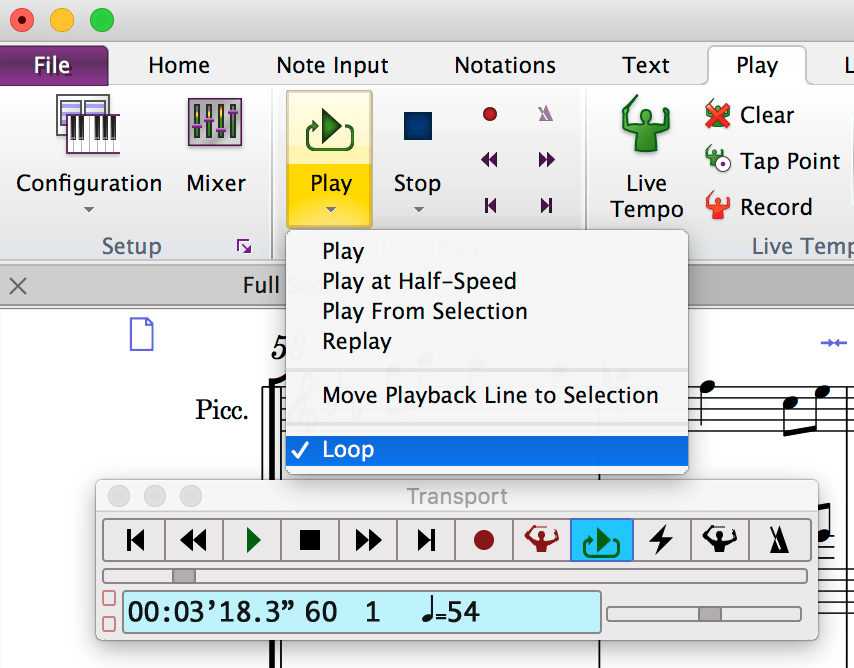 In 2019.4, when using NotePerformer as the playback device, the playback line strayed outside the selected area, as demonstrated in a short video.

Other changes to audio and playback:

This is a major step in moving the ASC fonts, which are available from NYC Music Services and included in the larger Norfolk and Pori packages, from “experimental” status to being fully supported in Sibelius. Bernie Cossentino of Twin Page Productions, who invented the procedure for making the ASC fonts, has been cooking up some more updates to the fonts, so look for those to come next week.

Another printing related fix in Sibelius 2019.5: Text that is artificially slanted for Italic (when using a font that doesn’t have a dedicated Italic style) is now always correctly slanted when exporting to PDF.

About these fixes, Sibelius product designer Joe Pearson told me, “The overall goal in these improvements is to tackle the inconsistencies that we see in Sibelius between exporting to PDF via the OS dialog and via Sibelius itself, as well as some of the various PDF export bugs that we’ve been living with for a while now.”

There are a few other fixes in Sibelius 2019.5, which also includes the latest updates to Avid Link. More information is at Sam Butler’s post on the official Avid blog.

The Sibelius 2019.5 update is free for all Sibelius users with active subscriptions and upgrade plans. The updated installers are available through users’ Avid accounts and through Avid Link.