If you’re like me, when things get busy it’s all too easy to miss the latest news — and right now there’s lots going on. Here’s a roundup of a few recent items of interest from the world of music notation software and technology, all in one handy blog post.

Fresh off his appearance with Microsoft CEO Satya Nadella, and just in time for the release of the new Surface 3

, StaffPad co-founder David William Hearn and his team have issued an update to the exciting new music notation tablet app.

Officially now at v.1.1.1.2, the latest StaffPad update shores up many of the app’s initial deficiencies by offering instrument re-ordering, custom time signature support, multirest support for printed scores and dotted notes for metronome marks. It also improves recognition and fixes a slew of issues related to performance, playback, printing, and much more. It’s a solid (and free to existing users) update to what already was a remarkable v.1.0 release.

Support for chord symbols and lyrics aren’t in the app yet yet, but David and his team have promised those to come before too long. StaffPad is available exclusively from the Windows Store for $70.

Now that you’re in updating mode, head on over to MuseScore’s web site to download the first maintenance release since version 2.0 officially appeared on the scene in March. Version 2.0.1 is primarily about bug fixes — more than 100 in all, according to the release notes.

MuseScore‘s Nicolas Froment said in a blog post yesterday that the focus was “on addressing all the crashes and score corruption issues that we could, and also a number of problems where the results of certain commands could be lost upon save and reload. Quite a few other less serious but still annoying bugs were fixed as well.”

Nicolas also said that they are also working on new features and other improvements and hope to have another release to present before the end of the year. 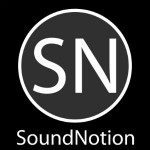 You have to give big props to the fellows at SoundNotion. For more than four years they have been creating weekly podcasts about new music and the music world in an engaging manner. Their sincere passion for the topics they cover is matched by their wit and fun they have on the show; a recent podcast covering the StaffPad launch was titled “Michael Jackson Half-Glove” as a kind of evidence of absence to explain the palm rejection technology in use by the new app on a Surface.

Over the weekend they released an hour-long talk with Daniel Spreadbury, who is well-known to readers. They first spoke with Daniel more than two years ago, and their recent visit explores the ground covered since then. Most of the topics echo those that Daniel spoke about recently on this blog, but the careful listener will notice a few goodies: The new Steinberg program has a name (but Daniel won’t reveal it yet); the software’s UI will be based on fonts and CSS, to ensure high-resolution display on both Macs and Windows PCs; you will be able to easily enter in open time signatures in the new program — Daniel says that you can “type X for a big open time signature, and you can type in as much music as you like and it will just keep on going.”

The episode, titled “More Right Than Others,” is a reference to the hosts and Daniel half-seriously talking about music notation and engraving in moral terms (oh, another goodie: the new software will separate out “engraving” rules from “notation” rules). That should give you an idea of how much the SoundNotion team cares about what they do.

Subscribe to SoundNotion on iTunes and look forward to your morning workout or afternoon commute at least once a week.

When we last visited with MakeMusic executives over breakfast in the fall of last year, they were just beginning the transition to their move to Colorado to join their new corporate bedfellows under the umbrella of Peaksware.

Fast forward six months, and the new office is up and running, most of team is in place, and development continues, we’ve learned. One of the veteran independent plug-in developers for Finale, Robert Patterson, has taken the opportunity to release new versions of his invaluable plug-in collections. According to Robert, this is a full revamp of the plug-ins that will permit updates into the foreseeable future, including support if MakeMusic transitions Finale to 64-bit. The new plug-in versions will only run on Finale 2012 or later, and include some new ones specifically tailored to 2014’s new features. Notable among them is the Smart Shape Editor, which allows you precisely to edit the start- and end-point assignments of beat-attached Smart Shapes. 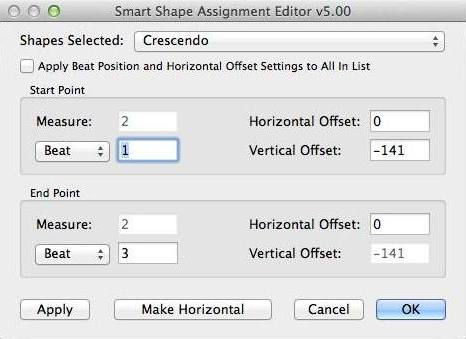 Most interestingly, the release notes say that the plug-ins are “optimized for Finale 2014 and Finale 2014.5,” the latter of which has not yet been officially announced. However, MakeMusic’s Jon Tschiggfrie has publicly confirmed on the Finale user forum that “Finale 2014.5, the next incremental update to Finale 2014, will continue our work toward modernizing Finale and improving its performance. We haven’t set a release date for the update, but already our development team has fixed numerous defects and are making use of the data collection we implemented in 2014d.”

Meanwhile, if you’d like to try the Patterson Plug-ins, a 30-day trial is available, after which time you can purchase the plug-ins from $74-109, and discounts are available for existing users. You may already be familiar with Robert’s plug-ins like Patterson Beams and Beam Over Barlines, which ship with Finale.

It’s also worth mentioning here that Jari Williamsson continues his excellent work on a bevy of incredibly useful free Finale plug-ins for Mac and Windows, all of which are highly recommended. Let the downloading frenzy begin!

In the past year, more than 25 new applications have added support for the open interchange format MusicXML. The incredible pace of a new app every other week supporting music notation in one way or another brings exciting possibilities and new challenges.

MusicXML’s inventor, MakeMusic’s Michael Good, spoke at length about the community’s progress last month at MusikMesse 2015, the international exhibition for music professionals and businesses. He shared the stage with the aforementioned Daniel Spreadbury and Noteflight‘s Joe Berkovitz, who gave updates on SMuFL and the future direction of MusicXML, respectively.

MuseScore‘s Nicolas Froment was in attendance and captured the entire presentation on video:

While you could break out the popcorn and watch the entire two-hour presentation, if you’re in a hurry you’d do well to read Michael’s blog post about the session and, if you like, download the presentation slides and the minutes of the meeting.