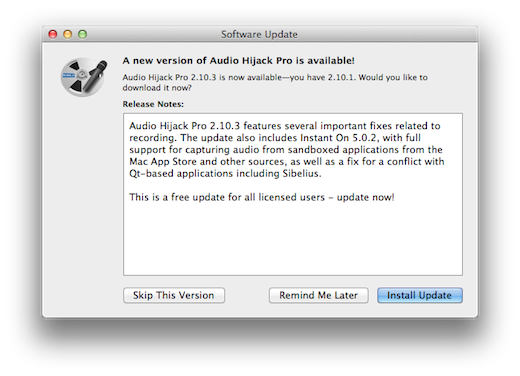 Many Sibelius users also have one or more of the excellent audio utilities from Rogue Amoeba installed on their Macs, such as Audio Hijack Pro or Airfoil. Both of these products include a feature called Instant On, which allows the applications to capture audio from an application that is already running, rather than requiring the user to quit and restart those applications.

We received a number of reports from Sibelius users that they were experiencing playback problems when using the Sibelius 7 Sounds library, either getting no sound at all, or getting errors when Sibelius tries to auto-save, or even when the user tries to save directly. A common factor seemed to be that these people had Audio Hijack Pro’s Instant On feature enabled. We got in touch with the fine folks at Rogue Amoeba, and they immediately investigated the problem.

At the end of last week, updates for Audio Hijack Pro and Airfoil were released that resolve the incompatibilities with Sibelius. If you have either of these applications installed, make sure you update right away.

Thanks to everyone at Rogue Amoeba, and especially Paul Kafasis and Ed Wynne, for their help in resolving this problem.

If you're eager to update to Sibelius 7.5, be aware that this first release has some rough edges in the...