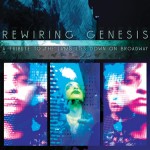 Rewiring Genesis is a re-imagining of Genesis’s 1974 concept double album, The Lamb Lies Down on Broadway, which:

…tells the surreal story of a half-Puerto Rican juvenile delinquent named Rael living in New York City, who is swept underground to face bizarre creatures and nightmarish dangers in order to rescue his brother John.

Of course! Anyway, singer Nick D’Virgilio of Spock’s Beard, arranger and horn player John Hinchey and producer and engineer Mark Hornsby got together to create a unique twist on the classic album. From their blurb:

“We wanted to see what would happen if we exposed the songs to a different climate of musicians,” says D’Virgilio, “The early Genesis recordings are so musical and very bluesy when you get right down to it. They really lend themselves to some different interpretations.”

Although all of the original elements of the songs are still included such as drums, bass, guitar and piano, the recordings now take on a more “theatrical” vibe. This, coupled with orchestra, rock guitars, and some fantastic horn arrangements, the songs now enter an entirely different place.

“We had talked about doing something like this for awhile,” says Hornsby, “With the recent attention our version of The Colony of Slippermen received, and the re-release of the original album in 5.1, the time seemed right to see what we could come up with.”

Those fantastic horn and string arrangements were, of course, scored in Sibelius by Nashville-based arranger John Hinchey, who also played on the album.

And now one of the songs, In The Cage, is on the nomination ballot for the Best Instrumental Arrangement-Accompanying Vocalist(s) award at this year’s Grammys! If you’re a member of NARAS and eligible to vote, please give it your consideration.

John says, “I did all the session arranging in Sibelius 5, reorchestrated in Sibelius 6 for the live show, and the entire project was recorded in Pro Tools.”

You can see an excerpt from In The Cage on John’s web site.

Like I said I hesitate to ask because I know there are other
Sibelius users up at well, Gil Golstein for example is in the same category.  There will be 5 nominees in
this category.
I did all the session arranging in Sibelius 5, reorchestrated in Sib 6 for the live show and the entire
project is recorded in ProTools.  I’ve got an excerpt from “In The Cage” our entry on my website.

You can listen to In The Cage here, buy the whole album from Amazon

, or hear a couple of other tracks at Nick D’Virgilio’s Myspace page.

My pal John Hinchey was kind enough to send me a copy of Leticia Wolf’s new album, The Fire and...