Notion 6.2 released with more integration with Studio One - Scoring Notes
Skip to content

Earlier this week on Tuesday, May 23, PreSonus released Notion 6.2, the latest update to its scoring software. Released simultaneously was an update to Presonus’s DAW application, Studio One, to version 3.5.

The one-two punch was far from coincidence; with the release of Notion 6.2, the software is more closely integrated with Studio One than before. Judging by the new features and enhancements listed in the Notion 6.2 update, interoperability between Notion and Studio was a clear goal for the product’s development.

From the blog post on Notion’s site, the Studio-One related improvements include:

In advance of the release we caught up with Notion’s product manager, Chris Swaffer. Chris has been with Notion for eight years, following spells as product specialist for Finale and SmartMusic in the UK and in education consultancy for companies such as Roland, Edirol, Hal Leonard, Yamaha and finally Notion, as part of the PreSonus software team who create Studio One in Hamburg.

“The aim of the interop of Studio One and Notion is to have the best of both worlds — to be able to seamlessly throw data back and forward between a DAW and notation software and benefiting from the depth of each standalone application,” Chris said.

“In Notion 6, we opened up sending both audio and note data in both directions, even over a network, and retaining document data, including things like plug-in data. In 6.2 we can now transfer into existing documents complete with tempo tracks — so you can edit your notation in Notion, and send any changes back into your original Studio One song. Or update stems from Notion to Studio One if any changes have been made.” Chris also mentioned that “it allows sending both an audio mixdown and any note data from Studio One to continue arranging/transcribing in Notion. It’s the next milestone for us as we continue making this workflow as seamless as possible and there’s much more to come.”

Chris pointed out that audio and playback features have been core to Notion’s existence from the very start. “Notion was the brainchild of Jack Jarret who masterminded MusicPrinter Plus in the late 1980’s,” Chris said. “Like its DOS forebear, when Notion was launched in 2005 its central feature was the playback of its own library — the London Symphony Orchestra, recorded by Notion at Abbey Road — and specifically the ability to perform with it live on stage.”

Notion 6.2 adds a few notation updates as well, such as slur control points that will be readily familiar to users of competing products. 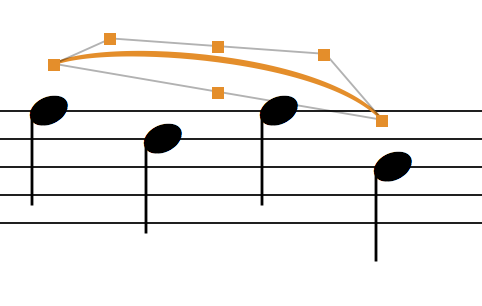 Other improvements include a new UK-style brass band template (which seems to be a miniature trend in scoring program updates, with a similar template being added in Dorico’s first maintenance release); better behavior of glissando lines between notes (again, perhaps part of a miniature trend as we think improvements may be imminent in that regard elsewhere); and better drum pad input.

Chris added, “We also are continually improving our custom implementation of the MyScript handwriting library and have several improvements in this update, both for writing directly into the score, and into the optional handwriting area – these handwriting improvements are now available cross platform on Mac, Windows and iPad.”

Speaking of iPad, Notion’s iOS app was updated in early May, adding 50 fixes and new features, including a new widget to get to scores quicker and a new Send to… dialog to share files with other apps on your device. We’ve learned that the next scheduled maintenance release to the iOS app will go live in early June.