Today, Wallander Instruments released NotePerformer 3.3, an update to its plug-and-play sound library. It’s been nearly a year since we’ve seen any update to the veritable playback tool, which was last at version 3.2. NotePerformer works with very little configuration needed in Sibelius, Finale, and Dorico.

NotePerformer 3.3 brings official Dorico 3 support, support for macOS 10.15 Catalina, and a number of other fixes and improvements.

Arne Wallander, creator of NotePerformer, told Scoring Notes this about NotePerformer 3.3: “This is very much an incremental update, with lots of small fixes. Apart from compatibility fixes with Finale (the articulation switching issues), the main changes are related to making NotePerformer macOS Catalina-compliant. This was a pretty big change, although it’s not visible for the user, due to Apple notarization, and the deprecation of OpenGL, which NotePerformer depends on.”

Further in the version history, it says that “NotePerformer will automatically determine the most appropriate graphics engine at runtime, and the looks of the interface should be identical. The Metal engine is used when running NotePerformer, in 64-bit mode only, on macOS 10.13 (High Sierra) or higher. ”

All users are recommended to update, and especially those users on Dorico 3 and/or macOS 10.15 Catalina. (For information about other music notation software compatibility with Dorico, see this Scoring Notes post.)

In addition to NotePerformer 3.3’s technical and compatibility improvements, there are a few other items which users will appreciate.

Clearing/resetting individual slots in the mixer

This is applicable only to Finale and Dorico, because those programs use NotePerformer’s mixer (Sibelius uses its own mixer with NotePerformer).

It’s now possible to delete individual instrument slots  from the NotePerformer mixer, instead of needing to reset the entire mixer. “This is useful,” according to the version history, “if you have lingering, unused, instrument slots in the mixer, which you would prefer to hide.”

This is done by going to an instrument’s Override Sound menu and selecting Special > (delete slot). There is also a (reset controllers) option here, which you can use to quickly reset the volume, pan, reverb and mute/solo setting to that instrument’s default values without affecting the other instruments. 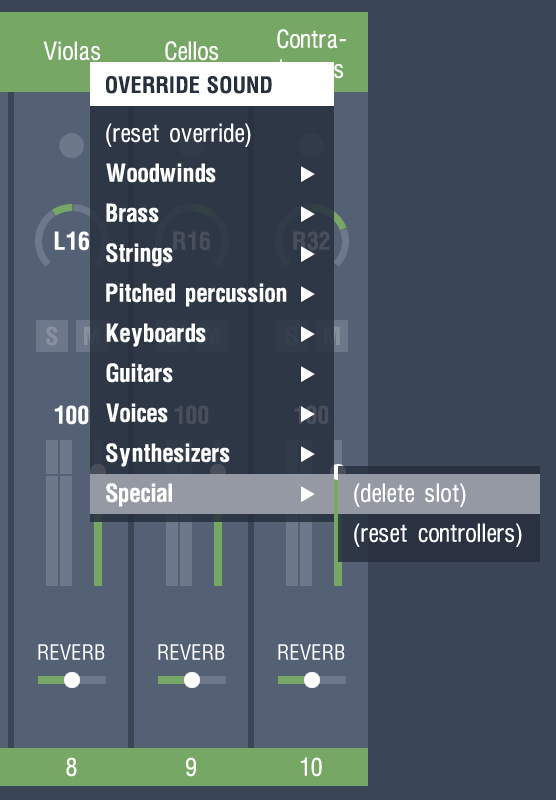 The following playback items have been improved or corrected, across all software programs (Sibelius, Finale, and Dorico):

In addition, the mapping of NotePerformer’s drum sets has been updated to align with General MIDI keyboard mapping. This change was made to better facilitate MIDI keyboard input in Finale, but should go unnoticed by users in other programs.

Note that if you are using Dorico 2, existing documents may no longer playback the correct sounds for drum sets. The problem may be resolved for that document by opening Play > Percussion Maps…, selecting the NP Drum Set percussion map, and clicking
Reset to Library Defaults. 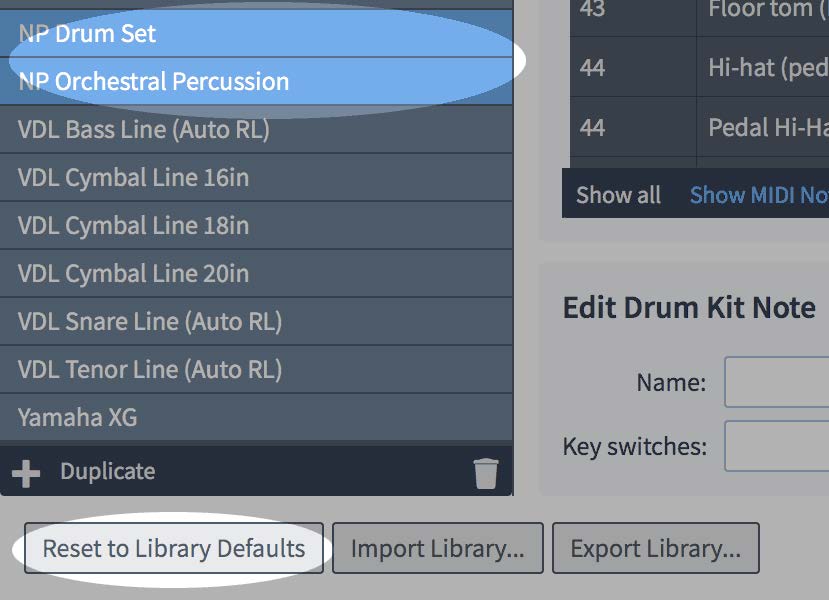 Previously, NotePerformer’s included manuscript plug-ins would sometimes not generate the appropriate technique text, when used with certain foreign-language House Styles where the internal text style names had also been translated. For example, a Spanish House Style could have renamed “Technique” text into “Tecnica” instead, rendering NotePerformer plug-ins non-functional. This has been fixed.

Writing pipe organ registrations by name could cause conflicts with NotePerformer’s designated plug-in for changing organ stops. The problem has been fixed, by making sure NotePerformer ignores the text entry in favor of the plug-in settings.

The pipe organ/accordion plug-in would sometimes refuse to run, when used with foreign-language scores because the plug-in could not identify the instrument for the selected staff. This problem has been worked around by falling back to identifying the instrument based on sound ID rather than the instrument’s name.

Certain musical passages would not produce the correct articulation in Sibelius, e.g., subsequent muted slurs ending on staccato would sometimes only respect the first slur. This is corrected.

Sibelius 6 would sometimes crash when using NotePerformer, due to running out of application memory as a 32-bit software (2 GB in total). So in order to conserve application memory in 32-bit mode, NotePerformer will no longer load less common instruments at startup, instead only loading these sounds when they’re first used in a score.

NotePerformer now uses key-switches rather than MIDI controllers for articualtions in Finale, based on the fact that this is what Garritan’s internal sounds use. To the extent possible, NotePerformer’s choice of key switches also matches that of Garritan’s built-in sounds, which should make NotePerformer somewhat more immune to playback errors as a result of stray key-switches that are hard-coded into existing scores.

Slurs would sometimes initiate or end legato playback on the wrong note. Also, slurs ending on a staccato note would not always playback correctly. These problems have been fixed.

Doits and falls would sometimes play on the preceeding note instead. An error which could also make the articulation inaudible. The problem has been corrected.

In Dorico, non vibrato would previously not work for muted strings, but now does. Also, the “vib.” technique was previously missing from the Expression Map, but has now been added. In Dorico 2, in order to activate these functionalities with existing scores, you must go to Play > Expression Maps…, select the NotePeformer expression map, and click Reset to Library Defaults. In Dorico 3, expression map versioning is handled automatically.

A tenuto note following a staccato note would previously be shortened unintentionally. It happened because the staccato wasn’t properly terminated, making the tenuto note mezzo-staccato rather than a tenuto. The problem has been fixed.

Starting from Dorico 3/NotePerformer 3.3, selected instruments (such as piano and harp) will have their dynamic level controlled by key velocity rather than a MIDI controller. You can then notate different dynamic levels for the bass and treble clefs for these instruments. It is also possible to manually tweak the dynamics on a note-by-note basis from Play mode.

A rare “ghost crash” issue on Windows has been fixed. Boo!

For new users, NotePerformer 3 is available as a download for $129, and a 30-day free trial is offered. A rent-to-own option is also available at $10.75/month.

For more information and details about NotePerformer and the 3.3 update, consult the version history and users guide.

Proving that getting saxophones to balance properly is as difficult to do in NotePerformer as it is in real life,...