Wallander Instruments, a Swedish maker of virtual instruments for computers and mobile devices, this week released NotePeformer for Sibelius. NotePerformer is a tightly integrated sound module that aims to offer more realistic phrasing and expression during score playback in Sibelius 6, Sibelius 7, or Sibelius First than what is produced by Sibelius’s default playback instructions. Within NotePerformer is a fully self-contained sound library that is intended to be used as an alternative to Sibelius’s built-in sounds. NotePerformer also aims to be incredibly simple to use, with minimal setup and no MIDI programming required to achieve satisfactory results.

In order to achieve its unique output, NotePerformer reads ahead in your score, much like a live performer would, so that phrases are considered in context and not necessarily note-by-note. Human beings do this instinctively, whether reading musical notes or written text – each item is considered in relation to those around it. In a musical setting, this means inferring performance information that might not be expressly stated in the score.

Expert MIDI programmers are renowned for carefully sculpting data to resemble a performance that a human would naturally give. While this is possible in Sibelius, it usually requires that the user enter detailed information that compromises the notation of the score, or at the very least, requires many round trips to the Inspector (or Properties window in Sibelius 6). Such tweaking is more easily achieved in a DAW or sequencer environment, such as Logic or Cubase, but of course this solution divorces the playback file from its origins as a notated score.

Many musicians who are fluent with notated music and want realistic-sounding playback, but are averse to technical fiddling, are confounded by either of the above options. Arne Wallander, founder of Wallander Instruments, acknowledged this conundrum, and saw an opportunity. “NotePerformer is the kind of software I’ve always dreamed of having myself, before even learning about VST, sequencers or gigabyte sample libraries,” he told me. “You write musical notation, and can hear it played back, with accurate phrasing and dynamics. It doesn’t need to be perfect, but it needs to be accurate enough so that you can use playback to improve your own skills and refine your scores.

“I quickly realized that this wasn’t what music in computers was about, but using sequencers is the way people do it, and I learned how to use sequencers,” Arne continued. “But now we’re in 2013, and people still write elaborate music by hacking MIDI streams. This is almost absurd when you come to think of it. MIDI is like the Morse code of music — it’s great for communicating simple things over distance, but I wouldn’t want to write a novel using it. But that’s what people do.”

The key to getting computer playback sound more musical, Arne said, is the concept of reading ahead in the score: “I’ve given this notation program concept a lot of thought over the years. It all came down to that it wouldn’t work unless you knew what’s going on further on in the score. That’s absolutely essential to knowing how to phrase the music.”

Such technology is new to Sibelius, but it’s hardly new to music notation programs. Finale’s Human Playback feature, which has been around for about a decade, pre-processes the score and can musically interpret markings that take phrasing into account. Among Human Playback’s shortcomings are that pre-processing even a moderately-sized score can take 5-10 seconds or more, and certain objects tend to be moved around during playback. In contrast, with NotePerformer there is a latency of only about 1-2 seconds, and the look of the score is not altered in any way.

Installing NotePerformer is about as easy as can be. The download is around 650 MB. Assuming you have already installed and run Sibelius at least once (so that certain folders can be created), the NotePerformer installer automatically places all the necessary files on your computer, including the VST plug-in, playback configuration, and sound set – in fact, NotePerfomer is geared towards those users who may not know, or care to know, what those things are or where those items are located on the hard drive. PC users will need to run the installer twice if both Sibelius 6 and Sibelius 7 are installed on the same computer. One license allows the user to install NotePerformer on multiple computers, provided that the licensee is the only person accessing the software on each computer.

Once you open Sibelius after installing NotePerformer, using its features is as simple as switching to the playback configuration called “NotePerformer” that was created by the installer. Do this in Sibelius 7: Play > Setup > Configuration > NotePerformer. In Sibelius 6: Play > Playback Devices…, then choose NotePerformer from the drop-down menu and close the dialog. Unlike using other sound libraries, no further adjustments are necessary in the Playback Devices dialog. The sounds are lightweight and load quickly in the background.

So that optimum playback is achieved with NotePerformer, a few recommendations: 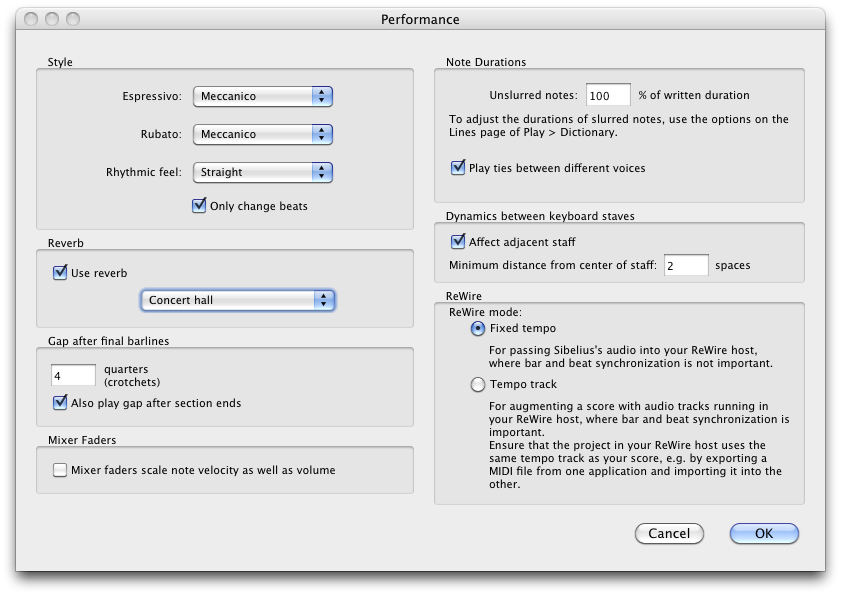 The simple and clear user guide offers a few more tips on how to get the most out of NotePerformer.

So how does NotePerformer sound? On the product’s web site, it says that “NotePerformer playback is so realistic, it’s easily mistaken for a live orchestra if that’s what you’re after.” That’s quite a stretch, as all but the least sophisticated ears will not mistake the results for human performances. However, if your expectations aren’t quite that lofty, NotePerformer sounds very good indeed, and in many cases strongly outperforms Sibelius’s out-of-the-box options.

Here are examples that I created using excerpts of the first and second movements of Aaron Copland’s Third Symphony, with no additional expression markings beyond what is in the published score:

I also thought it would be interesting to try NotePerformer with one of my own original pieces and see how it compared to a live recording. Here’s the NotePerformer version of my orchestral work “Starsplitter”:

And here’s the live recording of “Starsplitter”:

Many more demos are available on the NotePerformer web site (or directly at SoundCloud).

It’s worth noting a few caveats about NotePerformer. The instruments and techniques that are included are limited to those generally found in a standard symphony orchestra. Also, because of the latency required to pre-process the score, real-time recording and ReWire support are not available while using the NotePerformer configuration (there is no latency during step-time entry). And, focusing on simplicity, there are no options to modify the NotePerformer plug-in instance like one might while using, say, Kontakt or PLAY-based plug-ins. Finally, it is not possible to use NotePerformer’s sounds outside of Sibelius, nor is NotePerformer currently compatible with any other music software.

The default NotePerformer configuration supports 64 simultaneous channels of playback, but Arne told me that “if you need more, you can simply create your own Playback Configuration with more plug-in instances. With NotePerformer, one stave uses one channel, always. So regardless of how many sounds or articulations you use, if you have 64 channels you can have 64 unique staves with their own sound, which is plenty even for a huge score.”

When it comes to combining NotePerformer with other instruments, Arne said, “We frankly have not made many tests in this area. As long as Sibelius handles the latency compensation there shouldn’t be a problem, but it’s very difficult for us to predict what happens when other instruments are involved.”

NotePerformer is likely ideally suited to the Sibelius user who is solely or mostly notation-oriented, composes or arranges fairly conventional Western-style music, and has no interest in tinkering with sound sets, MIDI, ReWire or advanced playback settings. For those users, the $129 price is well worth it and compares favorably with similar lightweight sample libraries like MakeMusic’s Garritan Personal Orchestra.

Users wanting to use NotePerformer in a professional production environment as published output for soundtracks and the like will probably not find its results compelling enough to use for that purpose, and will probably continue to use their fancy DAWs and terabytes of sample libraries. But for those needing a high-quality, quick, and economical demo recording of their score that is more satisfying than one that could be produced with Sibelius’s sounds, NotePerformer ably delivers.