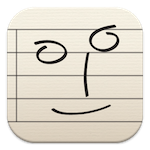 Since the release of NotateMe 1 more than six months ago, Neuratron (who makes NotateMe) has been hard at work improving their pioneering music handwriting app.

Earlier this week those efforts paid off with the release on NotateMe 2 for Apple’s iOS and the Google Android OS. NotateMe 2 boasts an improved handwriting recognition engine, which Neuratron says is more accurate for chords, multiple parts, accidentals, and tuplets. NotateMe also gains MusicXML importing. Other improvements announced are in the areas of speed, editing, entering notes, playback, layout, education, and workflow.

If you’re not ready to buy NotateMe but would like to try it out, a free version limited to a single staff, called NotateMe Now, is available for iOS and Android. Martin Dawe, Neuratron’s CEO, told me that “Apple are still reviewing NotateMe Now 2 for iOS – hopefully it will be available to download within a few days (which is why we have not so far made a formal announcement). We also expect to submit v2.0.1.0 featuring several fixes and improvements before the weekend.”

Neuratron has released PhotoScore & NotateMe Ultimate 8, an upgrade to its music scanning and recognition software that brings the...

NotateMe, a music handwriting app by Neuratron Ltd, was released earlier this week as version 1.0, having spent two months in...