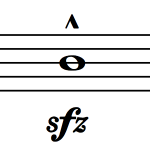 Two months ago we released Norfolk, the free Sibelius-compatible version of the Bravura music font designed by Daniel Spreadbury at Steinberg, and the responses to it have been very nice.

That release on October 9 was based on Bravura 1.02, which was the most current version of the font at the time we began working on this project. Since then, Bravura has been updated several times and now stands at version 1.08. So we have updated Norfolk to incorporate some of those changes, as well as fixing a few errors of our own making. The most current version of Norfolk stands at 2014-11-30.

If you downloaded the fonts on October 17 or later, you would have provided your e-mail address through our secure store and thus have already received notice of the update. If you downloaded the fonts earlier than that, or received the fonts from someone else, please take a moment to download the update here. Notices about future updates to the fonts will likely not be posted to this blog unless there is a serious problem or major improvements, but registered users will receive a notice of any updates via e-mail.

Bravura 1.08 now uses a longer (3¼ space) flag as its default option, but we opted not to include it in Norfolk, since the longer flags would look too large on shorter-stemmed notes in Sibelius, and it is not possible to dynamically adjust the flag size. So Norfolk still uses the 2¾ space flag.

Do you have any interesting projects that you’re using Norfolk with? Download the update, and let us know!

The Norfolk Text font for Sibelius is updated with the same numerals in the most current version of the Bravura...

Available for free from the Resources page on our NYC Music Services web site, the Norfolk family of fonts has...

There's an update to Norfolk, the Sibelius-compatible version of the Bravura font, which will now automatically support ligated dynamics.