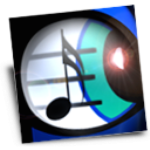 Today Neuratron released PhotoScore Ultimate 8, its latest version of the venerable music scanning and recognition software for Mac and Windows PCs. Integrated into the software is a desktop version of NotateMe, which the company says has already been downloaded on hundreds of thousands of devices around the world. Thus the new desktop product is officially known as PhotoScore & NotateMe Ultimate.

The desktop version of NotateMe, Neuratron said in a press release, is “especially optimized to work with Microsoft Surface, but also works with other stylus devices or a mouse/trackpad.”

Although that may be the case, the program doesn’t take full advantage of the high DPI of the Surface. Images are downsampled, making the music look rather fuzzy with jagged lines unless you zoom in at a high level. Hopefully this will be improved in time.

There is a full screen option to get rid of the taskbars and menus so you can fill your entire screen with music. NotateMe on the desktop appears to be a straight port of mobile versions for Apple’s iOS and the Google Android OS, so if you already use the software on one of those devices, you’ll feel right at home with no learning curve. As noted earlier this week, the latest version of NotateMe offers different handwriting area options including an Overlaid option and a Bar by Bar option. These options are included in the desktop app, in NotateMe > Handwriting Area.

As is has long been the case with PhotoScore files, you can send a NotateMe score directly to Sibelius from within the app. MusicXML and MIDI export are also included.

Regarding PhotoScore updates, the company says that they “have not forgotten PDF and sheet music scanning, and version 8 sees many improvements.” Those are listed as:

PhotoScore & NotateMe Ultimate 8 is available for £199 in the UK, €269 in the Euro zone, and $249 USD in the US, Canada, Australia, and most other countries. A free demo is available, and current users of PhotoScore Ultimate may upgrade for $99 USD.

Neuratron today also released PhotoScore & NotateMe Lite 8, a cut-down version of the software. A comparison table between the Ultimate and Lite version of the apps shows the differences. The Lite version is available for $59 USD, although users interested in purchasing this version may wish to hold off for now — Avid has said that PhotoScore & NotateMe Lite 8 will come bundled with Sibelius 8.0, which is expected to be released very soon.

Finally, Neuratron also announced the release of AudioScore Ultimate 8, the music transcription software that works directly with Sibelius. Neuratron says that AudioScore 8 features a completely re-engineered audio recognition engine. Here is a list of AudioScore’s improvements, as provided in a press release:

Pricing for AudioScore Ultimate 8 is the same as PhotoScore & NotateMe Ultimate 8. There is no Lite version of AudioScore.

NotateMe, the music handwriting app for mobile devices, can now take photos of your music and interpret them. Learn how...

NotateMe, a music handwriting app by Neuratron Ltd, was released earlier this week as version 1.0, having spent two months in...