In this post, we take a look at the main new features in the recent Notion update, and talk with Notion representatives about the product. Notion is featured at NAMM at the PreSonus booth, number 18701, in the Anaheim Convention Center’s North Hall.

Notion, the flagship notation software of PreSonus, has enjoyed a loyal following for years, especially since it sports features and elements that some other products don’t have.

Chief among them is a product — and file format — that is designed for both the desktop and iOS. (Avid’s Scorch iOS app can read Sibelius files but not create them, and MakeMusic dropped its Finale iPad reader several years ago.)

Notion has been available since 2005. At the time it gained notice for the quality of its playback and sample library, which was recorded by the London Symphony Orchestra at Abbey Road Studios. Baton Rouge-based PreSonus acquired Notion in 2013, and in 2014 it was prominently featured in use by Esa-Pekka Salonen as part of Apple’s “Your Verse” marketing campaign.

I was happy to visit at NAMM with PreSonus’s chief operating officer Jim Boitnott, who was at the helm of Notion for nearly a decade before the PreSonus acquisition. We talked about the history of Notion, the product’s evolution, and the latest Notion developments.

The goal of Notion when it was conceived, Jim said, “was to create this product that was really easy to use, fast, and had great sounds. For me, engraving was secondary, because I wasn’t publishing; I was more working into audio solutions. I wanted to create something closer to a DAW, but knew it was going to take a long time to build that. So we did one version at a time.”

More recently, Notion’s development has brought increased integration with PreSonus’ Studio One DAW, as we saw in the Notion 6 update and the Notion 6.2 update, in 2016 and 2017, respectively.

UK-based Notion product manager Chris Swaffer also discussed Notion with me in advance of NAMM, including Notion 6.5 — the seventh free maintenance update for Notion 6 — released earlier this month on January 15, 2019.

6.5 continues the trend of integration with Studio One, with drum tracks from the DAW automatically translated to standard drum set notation in Notion, and Chris said that was his favorite feature in the most recent update. “This means we can be part of a workflow that can take a user from recording into Studio One with our new ‘ATOM’ pad controller, right the way though to a printed drum part in just a few clicks,” he told me.

There is more to come with integration between the two programs. “Technically, we have this great side-by-side workflow between Notion and Studio One, but this is very much a first step. We are really excited about where this will lead to,” Chris said. “We’ve made sure that there are bundles available of the two applications together both online and via our dealer network. And this is also true within education, especially with the PreSonus Unlimited Site License — a simple proposition for institutions to have a DAW and score application on every computer on their campus for one fixed cost.”

Notion 6.5 includes a number of MusicXML and notation updates as well. Chris said, “We’ve heard some good things from users on improvements to our MusicXML implementation, in particular for support of new symbols and for better guitar tablature import and export.” 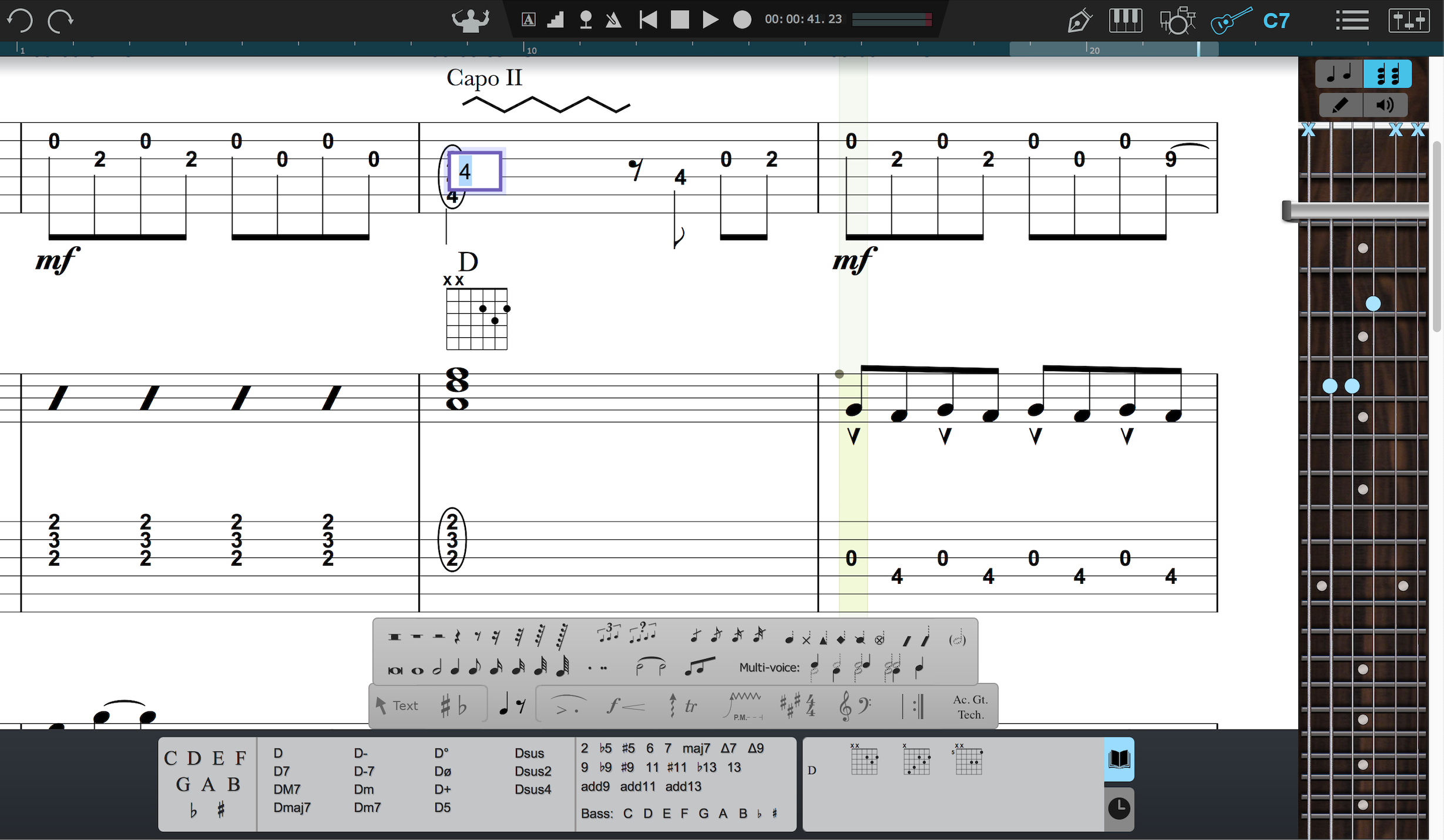 Open standards, especially MusicXML, are very important to Notion, and it was interesting to hear that Notion is part of a workflow that includes other desktop notation software. “We have many users who initiate projects on Notion iOS who then export to other desktop software for final layout,” Chris described. Some other users go the other ways — they “write in other applications and bring into Notion for the sounds or for live performance.”

Jim added, “I think a lot of our Notion users are using other products as well. These are tools now; they’re another way of getting your ideas to someone. Whether or not they XML it to Finale or Sibelius — the great job by the MusicXML team has helped that a lot.”

This variety in the workflows of users led Chris to remark, “There is a great deal of fluidity in the notation market at the moment. Users and institutions are really starting to look around and either switch, or add different applications to their workflow as their needs evolve rather than use a single piece of software to do everything.”

Notion’s users encompass a wide range: “From school pupils to professional composers, beatboxers to film composers and conducting professors to rock guitarists,” Chris said. “Notion is of course notation software like many others, however, right from the outset it was designed with sounds and live performance instrument foremost. We also wanted to make sure that actually composing with Notion was easy to learn and quick to do, to enable a user to focus on the creative task at hand.”

Users may not be aware that Notion 6 comes bundled with the Notion Score Library, which contains 200 public domain scores. “That always gets a great reaction when I mention it,” Chris said. “When used with Notion’s live performance tools,” it can be used in many educational and performance contexts that combine notation and playback.

The addition of the standalone iOS version for iPad and iPhone introduced some more modern workflows, Chris continued. “Making quick edits on a score on the road and having the file seamlessly update via iCloud to the desktop version back at home, for example. And finally we have this unique transfer ability with Studio One, enabling users to send useful data between DAW and score, including note data, audio (both ways), chords and tempo, track and document info, and VST instruments and settings.”

Could we have a “notion” of things to come? To that, Jim concluded our interview by saying, “If I care about speed, ease of use, and sound quality, then we accomplish our vision. I think that Notion users are very happy about that. That’s the type of user they are. They maybe are not always the engraver, but they care about writing, notation is one of their core languages, they like the idea of how they access the sounds and articulations that come with it, and I think they like the support we give them as a company. iOS plays a big role in that; a lot of our customers are both iOS and desktop. When we make some big announcements in the next year, I think we will get a whole new group of users.”

All product images in this post were provided by PreSonus.