In this post, we visit at NAMM with John Mlynczak, managing director of Noteflight, the web-based music notation software that allows musicians to create, share, teach, sell, and purchase music. Noteflight is present at NAMM at the booth of its parent company, Hal Leonard.

I remember when a colleague of mine first alerted me to a new web-based notation software called Noteflight. It was about 10 years ago, and he had read an article by Daniel Spreadbury on none other than Sibelius Blog, the predecessor to this Scoring Notes blog you’re reading right now. In his article from 2008 — a lifetime ago in tech years — Daniel said that Noteflight was “one of the most interesting current developments in music notation software…it shows a lot of promise. I’ll certainly be keeping an eye out for this product as it leaves beta and becomes open to anybody to give it a try.”

At the time, Noteflight was written using Adobe’s Flash Player, which Daniel rightly said was “ubiquitous” at the time — see how long a decade is in tech terms? — and its potential was still unknown, with cloud computing on a mass level still in its nascent stages.

Well, fast forward to 2019, and Noteflight is thriving (and no longer relies on Flash), with free and paid plans for its notation editor and music education platform, a community of more than 3 million members (according to the company), and a marketplace that offers scores for sale and which leverages the power of its parent company, Hal Leonard, the music publishing behemoth which acquired Noteflight in 2014.

Noteflight’s founder, Joe Berkovitz, transitioned away from the company almost exactly a year ago. Joe had an enduring impact on the field, not only with Noteflight but as a co-chair of the W3C Music Notation Community Group, which develops and maintains format and language specifications for notated music such as MusicXML and SMuFL, used by web, desktop, and mobile applications. (Joe recently stepped down from the W3C position as well, with Soundslice‘s Adrian Holovaty filling his role.)

In January 2018, John Mlynczak took the helm as Noteflight’s managing director, having previously worked as its vice president of sales and marketing. With one year under his belt at the top spot, and a presence at NAMM that includes his Noteflight duties and participation on several panels, it was a good time to discuss the latest Noteflight developments with John.

First, I wanted to know more about John. With degrees in music performance and education, he taught music full time for six years while playing trumpet in Louisiana. “After starting a music technology course, I quickly found that students are excited about creating music in schools,” John said, “and I began working on curriculum and professional development in this area. From 2011-2013 I was involved in state-level curriculum writing for creative arts. After that, I found an opportunity at PreSonus to start a new position,” which eventually became director of education.

Following his stint at PreSonus, John started at Noteflight/Hal Leonard in 2015, first as director of education technology before taking on the job of vice president of sales and marketing and eventually managing director. He still teaches graduate and undergraduate courses in music education technology in the Boston area and is “highly involved in music education advocacy,” having served as president of the Technology Institute for Music Educators (TI:ME) from 2016-2018. 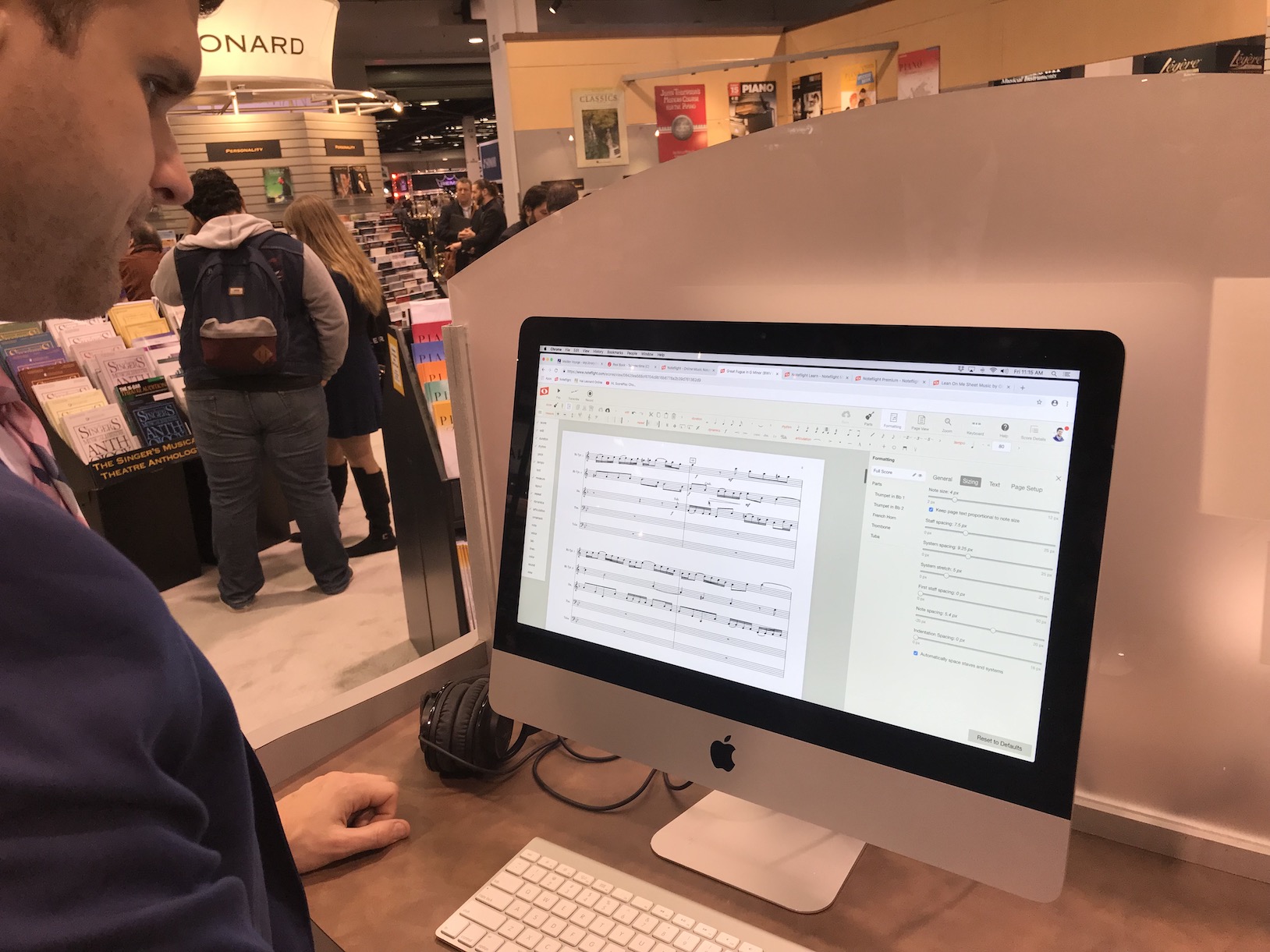 With Scoring Notes’s predisposition to covering the commercial desktop notation products like Finale, Sibelius, and Dorico, it’s a good opportunity to remind readers what Noteflight is. “Noteflight,” John explained, “is a web-based music notation software that allows musicians to create, share, teach, sell, and purchase music. Everything runs in the browser and is available on any device that can access the internet. Noteflight is a total solution for creating music through selling and purchasing music, all completely legal through Hal Leonard.”

That imprimatur is key, John said, especially as the Noteflight Marketplace has become more central to the company’s strategy. “Noteflight Marketplace is a real game-changer in that people can sell their arrangements of copyrighted works, plus you can buy the notation file and adapt it,” he said. “This has been received well, and in fact many times the feedback we hear is that people do not believe this is true. They say this really can’t be “legal”, but we are ensuring that all rights holders are compensated on each transaction and we do want to allow the flexibility we have built. The internet will continue to push the boundaries of digital music distribution and we need to be the leaders.”

Indeed, everything sold on Noteflight Marketplace is a Noteflight file. These are saved in users’ accounts as a “Purchased Score” where users can print, save to PDF, and make copies in their Noteflight account and use the editor to adapt the music.

Speaking of users, John said that Noteflight’s users “range from students all the way through professionals. Noteflight is usually people’s first notation software because it is easy to use, online, and has a free version. As the product has grown, our customers stay longer and longer, and now professionals are able to utilize Noteflight for their needs.”

John sees further growth in the education space. He said that Noteflight’s audio recording feature is probably something that is under-publicized, and, when people find about about it, they get very excited about it — “particularly in education,” he noted. “Also, many teachers use a Noteflight Basic account with their students and never try out Noteflight Learn, which makes teaching music with Noteflight exponentially more efficient. We want educators to move from having students print out their Noteflight scores and hand them in and try teaching with Noteflight Learn, which is ideal for one-to-one teaching environments.

The importance of attending the NAMM Show, John said, “is about networking, strengthening current relationships, and building new ones. Our presence here allows us to continue to expand our partnerships.”

Those relationships include meeting with representatives from other notation products and participating in the W3C open standards discussions. “I am excited about the consistent improvements from the other notation programs and it is good to know we all have the ability to keep pushing to make our solutions stronger,” John said. “Open standards are of the utmost importance. At the end of the day, we as musicians just want to create and share and make music together. As an industry we should work together to make this as easy as possible.”