This post is about the new improvements Soundslice has announced in conjunction with the NAMM Show. Soundslice is a web-based music learning software and music player.

The NAMM Show is an important showcase for product manufacturers and developers. It can also be a useful opportunity to announce new tools and features, and the immutable schedule of the convention calendar is a motivating force. Such is the case with Soundslice, the impressive web-based learning software and music player — and, as of this week, a lot more, besides.

On the eve of NAMM, Soundslice announced a suite of new features and changes that should make anyone in the field of music notation software and technology sit up and take notice:

Taken either individually or as a whole, these features represent the biggest changes to Soundslice since it went live in its current form in 2014 (before that, it was a tablature-only tool). So I visited Soundslice at booth 2044 to get a fuller picture.

“Of all the things we’re launching,” said Adrian Holovaty, Soundslice’s founder, in a blog post this week, “the thing we’re most excited about is a brand new part of our site: Soundslice Channels.”

Adrian said that “you can think of it as a ‘Twitter for snippets of music notation,’ or perhaps ‘YouTube, but only for music performances, with awesome built-in practice tools.’ A channel is basically a feed of music notation, synced with video or audio performances. You can follow musicians to get a personal timeline, you can bookmark slices you want to practice, and you can cover the ones you really love.”

In order to get a sense of the incredible potential of Soundslice Channels, you need to visit a channel. Adrian recommended the channel for the San Antonio-based percuss.io group, devoted to visualization and notation syncs.

It’s true, it does look a little like a Twitter or Instagram feed — but this is one that every music educator should be encouraging their students to follow. Speaking as a “recovering” percussionist, if this existed in my high school days, it would have been difficult to pry me away. The video loads seamlessly, the “slices” (Soundslice’s new term for score snippets) flow beautifully in sync with the video, and I find myself hooked as I can watch these master musicians demonstrate techniques at the same time that the notation scrolls along.

Of perhaps greater interest to readers here is Soundslice’s new notation and tab editor, which is entirely web-based. Adrian said. “The Soundslice editor is especially good for transcribing existing audio/video, because it integrates beautifully with our synced audio/video and practice tools. To our knowledge, this is the first time a notation and tab editor has been integrated directly with video/audio playback of source recordings and transcription tools such as slowdown and looping.”

Until now, in order to get something into Soundslice, you first had to create it in other program, export it as MusicXML, import it into Soundslice — and do the whole process over again if you wanted to change as little as one note. So it’s clear why a built-in editor was high on the to-do list. 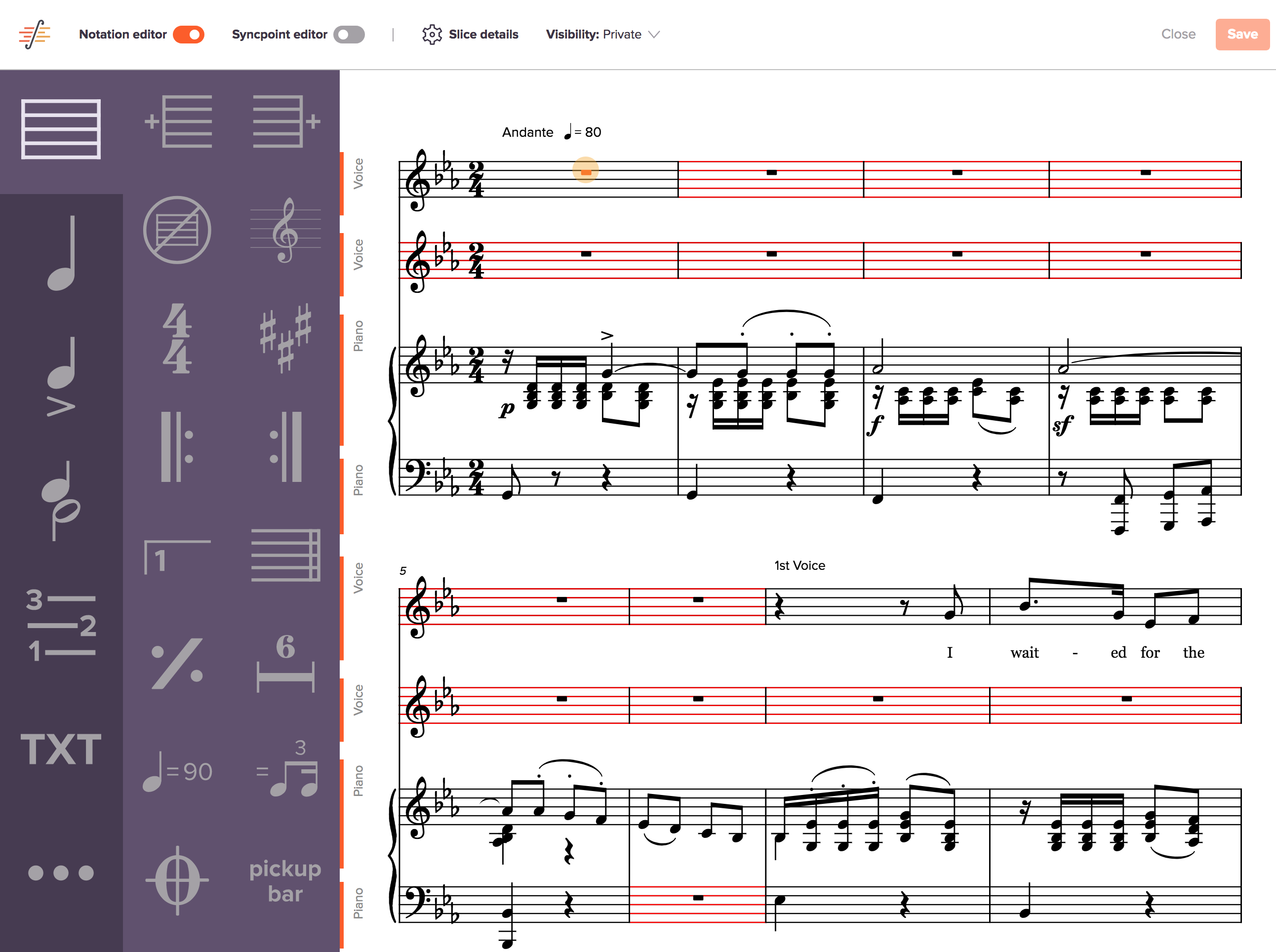 Building one was hardly an overnight process, however. It took “two and a half years,” Adrian told me. “Imagine how long it would have taken if we didn’t already have a rendering engine! We had the benefit of having a relatively fully featured notation rendering engine already; it had been in development since 2013 and live on our site since early 2014. So the first big challenge, somewhat ironically, was that we didn’t want to disrupt the existing code. This forced us to implement it in a clean way, such that your web browser only loads the editor bits if it needs to. That way, all of the people who use Soundslice merely to consume music notation won’t be ‘penalized’ by needing to download tons of editor code that they wouldn’t actually use.”

Other challenges abounded beyond that initial software-design matter: “I’d say the main challenges have been with UI,” Adrian continued, “choosing the right thing for the editor to do in certain situations. For example, what happens when you copy and paste a bunch of music? Does it replace existing music, or append? What happens if the music you’ve copied is not contiguous (e.g., you used Ctrl+click to select multiple notes in different bars), and then you paste it? (You’ll notice many notation programs sidestep this edge case.) What are the most intuitive key commands? To what extent do we force ‘correct’ notation, as opposed to being a tolerant ‘open canvas’? (We opted to be closer to the latter.) There are lots of questions like these that come up as you develop something this complicated — and that’s a large part of what makes it fun to build.”

Creating new music from scratch is definitely possible, Adrian said, but “it’s a bit hidden on the site at the moment — our designer is going to completely revamp the way that works — but you can indeed do so. Personally, I notate all my stuff directly in Soundslice these days.” MIDI entry and editing is not currently supported in the Soundslice editor, but Adrian said that it is planned.

The Soundslice user base, Adrian said, is split in their workflow needs. “Some are quite ‘professional’ and are intent to keep using their current Sibelius/Finale/Guitar Pro workflows, while others are actively looking to simplify their lives and do everything within Soundslice,” he said. “Certainly for the ‘casual musician’ whom we’re trying to appeal to with Soundslice Channels, we intend it to be used without needing any other program.”

Complete documentation on using the editor is on the Soundslice site, and instructional videos are promised soon.

Other features and principles

When I asked Adrian for a reminder of who Soundslice’s target users are, he said that “it’s educational software for musicians who want to learn or teach specific pieces of music. The premise is that you can learn a piece of music better if you have everything in one place: the notation, tablature (if appropriate), one or more performance recordings (video or plain audio), visualizations of a keyboard or fretboard, slowdown tools, looping tools. And it’s all accessible online — so it’s a part of the greatest information repository mankind has ever created (the web) instead of being buried in some native app.”

To that end, the new comments and covers features aim to fulfill that premise by having even more information handy. Comments are self-explanatory, while covers can help students learn a piece even more by making an “interactive music-learning and practice package,” as Adrian says on his blog, giving this slice as one example.

“Personally,” Adrian said, “my dream is for all my favorite musicians to maintain Soundslice channels. I want to follow Julian Lage’s latest licks and ideas, for example. Sure, you can follow artists on Twitter, Facebook or Instagram — but that’s more about music culture than the nuts and bolts of music making. I don’t care about gig announcements, I don’t care about selfies, I don’t care about artists’ political statements.

“I care about the actual music,” Adrian stressed. “Note choice, fingerings, rhythmic ideas, harmonies, arrangements. That’s the void Soundslice Channels is trying to fill.” In addition to the percuss.io channel, he encouraged users to check out the official Soundslice account, which “has great stuff — mostly guitar,” as well as his own “modest contribution” on his personal channel.

When it comes to the actual music, Soundslice’s MusicXML importer is one of the best out there. I asked Adrian about Soundslice’s approach. “We focus mostly on the notation semantics, not presentational data,” he said. “For example, we ignore stave break data and exact coordinate positions of glyphs. Of course, that puts lots of pressure on our notation renderer to Do The Right Thing, as we don’t have that hard-coded positioning information — but I’d argue that’s a healthy pressure. It means that when notation display issues arise, we can fix them the ‘right’ way by improving our rendering engine (as opposed to merely blaming the position data in the MusicXML file).”

He continued, “We also strongly focus on the robustness principle (‘Be conservative in what you send, be liberal in what you accept’). There’s so much variety in style and substance of MusicXML generation among notation programs — including lots of subpar or outright wrong/buggy interpretations of the spec. Our code bends over backwards to make sure it interprets things in a way that’s consistent with real-world usage, even if the files aren’t technically correct.”

“I see us developing all of the things we launched at NAMM: our notation editor, our new community features and Soundslice Channels,” Adrian said, when asked about what to expect in the next year. “There’s always more polish to be applied.”

The work of the open source community — to which Adrian is a prolific contributor — has benefited Soundslice. “The fact that MusicXML exists is clearly great for Soundslice — and any other notation product, for that matter,” he said. “It enables new products, such as ours, to be able to interoperate with much more established programs. And it puts power in the hands of individual musicians, who can now transfer their data across systems. SMuFL has also been good for Soundslice. Because we use SMuFL, in theory we can support multiple music fonts and things would mostly Just Work. We haven’t yet done this, beyond some small internal experiments.”

For MNX, the burgeoning new standard under discussion by the W3 Music Notation Community Group, “it’s too early to tell for sure,” Adrian said. “But if its vision is achieved, then it will make life better for developers of music notation products, because the notation will be defined in a clearer way than MusicXML (which can be ambiguous). In turn, that will make life better for users of music notation products, because their products will have a higher chance of doing the right thing when it comes to file import/export.”

With its foray into the world of online music notation editing, and its educational practice offerings, Soundslice might start to invite comparisons to Noteflight and SmartMusic, respectively, among others. I asked Adrian about this, and if he thought Soundslice is unique.

Indeed, Soundslice’s focus has been on improving their own product that works toward fulfilling their mission. If the past year is any indication of what’s possible, users will be keeping tabs (pun intended) on Soundslice in the future.

Our NAMM 2017 coverage continues with Soundslice, the web-based music-learning software with an innovative music player that syncs notation with...

The 2017 NAMM Show opens one week from today in Anaheim, California. Music companies and representatives from around the globe...