Yesterday at the NAMM 2018 Show I headed over to the MakeMusic booth 11102, which is part of a larger display of Alfred Music’s product offerings. As of last year, Alfred and MakeMusic are both part of Peaksware, the Boulder, Colo.-based parent company of MakeMusic since 2014. 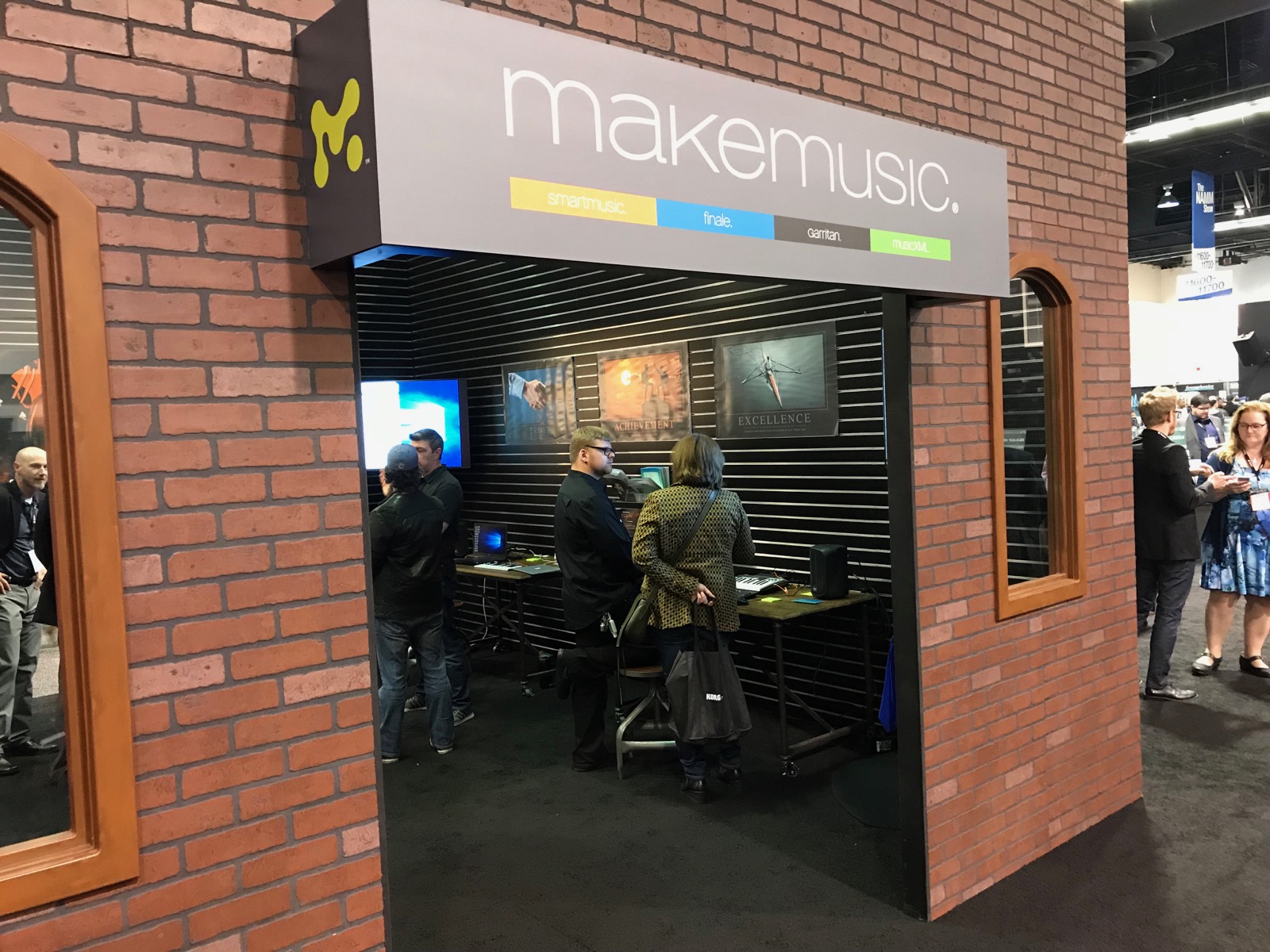 Since the acquisition, we’ve kept in regular touch with its CEO Gear Fisher, who have overseen the company’s move to Colorado, the Alfred Music deal, the 2015 acquisition of Weezic, and new SmartMusic product offerings, including a move to an all-web-based model.

The latest development with SmartMusic is a new online notation tool — officially still in beta, but proudly on display at NAMM — which Gear was eager to demonstrate. “We’ve been working on a notation editor inside SmartMusic in direct response to teachers asking us for the ability to create their own scales and upload their own content,” he said. “From day one, SmartMusic has been able to ingest MusicXML, but you haven’t been able to edit it or create your own scales. So we’ve solved that big need and created a very robust notation tool.”

In comparing it to desktop software, “it’s not Finale, and it’s not trying to be Finale,” Gear stressed. For teachers, “it’s instantly assignable to their classroom and you can save it into the cloud for future use. We’re really proud of how complete the editing tool is.”

I then met with Michael Johnson, vice president of professional notation; Michael Good, vice president of MusicXML technologies; and Mark Adler, notation product manager. The NAMM Show is a showcase like no other, and each exhibitor makes a decision to attend in the belief that it will benefit their products. I wanted to know specifically what MakeMusic hoped to achieve at this year’s show. Michael Johnson said that “NAMM is an opportunity to meet with business partners, distributors, colleagues in the industry, the W3C MusicXML group, and longtime friends of the company. The goals of our meetings include reviewing the previous year’s results, collaborating on goals for the upcoming year, previewing product releases, answering lots of questions, and solving problems. Face to face conversations remain the most efficient way to communicate, so while we are in touch with most through the year, this is the unique opportunity to all be in the room at the same time.”

Over the past year, MakeMusic released three free updates to Finale, which we covered here on Scoring Notes: 25.3, 25.4, and 25.5. I asked Michael how he would characterize those updates. “We’ve upheld our commitment to deliver value to customers, pay down tech debt, and ensure that Finale continues to work with OS upgrades and updates,” he said. “Finale supported High Sierra the day Apple released the new release. I’m delighted to say we were the only notation application on the market that could make that claim. The release of MusicXML 3.1 to the community was another significant accomplishment as well as releasing updated plug-ins. The Finale team added little features like a clear key shortcut for Mac laptop users, crescendo and decrescendo opening parameter, transposition of MIDI notes on entry, and key signature cancellation improvements. Finally, they addressed hundreds of longstanding bugs in the software to improve performance, stability, and workflow.”

In terms of making Finale more affordable to students, Michael said that they were “very pleased to now be able to offer Finale for $99 for college and university students.”

As improvements are being made to Finale to modernize it and keep it current with the latest operating systems, it cannot be denied that Finale is an old program by most software standards. Indeed, “the balancing act of addressing tech debt while providing features and defect fixes to users remains one of our most difficult challenges,” Michael said. “It all can’t be done at once and there are some dependencies to the work that isn’t always obvious to customers.”

Sometimes those dependencies lead to unexpected issues, and, quoting Dwight Eisenhower, Michael said that “‘plans are useless, but planning is indispensable.’ There are always surprises with each new major OS release that need to be dealt with.” Hardware is another wildcard: “The adoption of new hardware also causes us to adjust our plans; how quickly that hardware is embraced by our users definitely affects our roadmap.”

It’s a basic fact of tech life that as hardware specs improve and prices drop, consumers adopt the new stuff. “Compatibility with contemporary hardware and software has been our #1 priority since moving to Colorado,” Michael stressed. “The team has made great strides in being up to date, but as the Hi-DPI / High-Resolution issues attest to, we’re not done yet. As mentioned previously, Apple’s release of high-performance iMacs has forced our hand a bit on addressing performance improvements in the application. Finale’s rendering on Mac has been a concern high on our radar, but the stakes have been raised. The same could be said of Windows hardware when it comes to supporting Hi-DPI displays. The impediment for us is the legacy code that must be addressed to utilize new hardware and OS APIs. We will get there, just not as soon as any of us desire.”

Looking ahead, “MakeMusic will change and adapt our roadmap as necessary,” Michael said, “but in general terms, we plan 2018 to be similar to 2017: free updates to v25 with features and defect fixes while tending to technical debt to ensure compatibility with updated hardware and software.”

The field of music notation software and related technology has undergone significant changes in the past couple of years, and MakeMusic is keeping an eye on it, Michael said. “The current climate is ever changing to accelerate workflows, improve outputs, and ultimately have better live performances of the art created via software. It is an exciting time to see how automation, AI, and ML will play a role in music notation. Furthermore, all the major players in the notation field have either changed ownership or built new teams in the past few years. How those resources evolve their product line to meet the demands of the market will be telling. Users can expect to see integration with publishing platforms to emerge and evolve in the coming years.”

With regard to advancements in digital displays, “There is no doubt that notation is going the way of the printed word,” Michael said. “Just as paper books have remained with some unique pros, printed music will remain on the market. Similarly, ebooks have some great advantages, so does digital display. The opportunity is in providing a unique value proposition in that medium. For Peaksware, MakeMusic’s parent organization, there is an investment in both forms with Alfred Music Publishing leading the way in print publishing and SmartMusic set squarely in the digital display space. Finale’s value is quickly delivering high-quality output to both formats.”

Later on at NAMM I’ll be attending the W3 Music Notation Community Group meeting and providing coverage from that discussion. As far as MakeMusic is concerned, Michael Good said, “These open standards [such as MusicXML and SMuFL] are ultimately good for the industry, our users, and the art of music. MusicXML, in particular, is critical to our current products. It provides the way for customers to add repertoire to New SmartMusic, and for us to transfer our existing repertoire from SmartMusic Classic to New SmartMusic. Our customers import MusicXML files into Finale from over 90 different applications.”

I was curious to learn what third-party resources MakeMusic turns to for news and information about the field (In additon to Scoring Notes, of course!) They offered the following resources:

In the interest of continuing the conversation, I wanted to know the best way users could communicate their feedback to MakeMusic. Michael Johnson said, “If someone wishes to provide a suggestion to improve the software, I highly encourage them to visit the Finale Feature Request forum. I actively engage in all posts and find the community to be wise, creative, honest, and sincere. The Finale user base remains one of our greatest strengths to support each other and answer questions. I am humbled and honored with the level of dedication, support, and collaboration displayed by everyday users on our community site, the Finale Problems and Questions forum.

As the sun set on the first day of the 2019 NAMM show, I talked with Mark Adler, MakeMusic's director...