Last spring, you may recall that MakeMusic announced that they were going to include PDF importing directly into Finale 25. Mark Adler, MakeMusic’s notation product manager, snapped a photo of a piece of music with a mobile scanning app, sent the file to his computer, and demonstrated opening the file directly with Finale.

The inclusion of this planned feature was a relatively modest evolution in that it obviated the need for separate music scanning software (priced at around $300) to read these files, save them, and then open them in your music notation software of choice.  There was no real breakthrough in terms of music recognition capability, for which the technology had been available and modestly improving for a couple of decades already.

Surprisingly, though, a row ensued, with one prominent composer predicting lawsuits over the feature along with “the collapse of music sales” and declaiming “no upside” to it. This misguided opinion gained a following on social media, and in light of the brouhaha MakeMusic decided to pull the feature prior to release of Finale 25.

Nevertheless, the music recognition technology which had been available all along remained so.

Without burying the lede further, Musitek, the maker of that technology, has released it as a separate $100 product called SmartScore Music-to-XML that will do the exact same thing as what was planned for inclusion in Finale: take a PDF containing scanned music and convert for use in music notation software. The Mac version can be purchased from Apple’s App Store and the PC version can be purchased from Microsoft’s Windows App Store.

What is SmartScore Music-to-XML, exactly, and how does it differ from what’s already available, or indeed, what was going to be included in Finale?

Music-to-XML is a converter box

Music-to-XML is, essentially, a “black box” that, like the schematic above, intakes PDFs (or TIFF image files) and outputs music notation files in the MusicXML interchange format. It can optionally bypass the step of saving the MusicXML file to your hard drive and instead send it directly to Finale, Sibelius, or Dorico.

Unlike its big brother SmartScore X2 Pro or SmartScore’s main competitor, Neuratron’s PhotoScore Ultimate, there is no music editing capability in Music-to-XML. You can’t actually open and view a file with Music-to-XML; you can’t resolve errors, extract parts, delete items, change page size, transpose, print it, play it back or export audio. Music-to-XML is only useful if you have a music notation program to work with, while the more full-featured programs like SmartScore X2 Pro and PhotoScore Ultimate can be used as stand-alone products.

If you’re familiar with the default output from these products already, you can expect similar results from Music-to-XML. Generally speaking, the clearer and easier the music is to read, the better the output will be. Simpler music will fare better than more complex music. Lyrics and chord symbols are a bit of a crapshoot.

Musitek offers helpful tips in making the most of your source material:

Notably, Music-to-XML will not read a PDF file with an password restriction on opening, assuaging one of the more legitimate concerns about the technology. However, if a PDF file can be opened without a password but it’s print-restricted, it will work just fine in Music-to-XML, because the software converts the PDF to an image anyway. In other words, it “sees” the document the same way a human would. It doesn’t access the embedded fonts, characters, or underlying data in the document the way PDFtoMusic Pro, an app which only works on PDFs created directly from music software, does.

Commendably, MakeMusic has kept their initial blog post and video available, along with the test file and unedited Finale result that Mark Adler used in his demonstration. I thought I’d start by using that same test file in Music-to-XML, and then sending it to Finale.

For a small file like this, recognition is virtually instantaneous. For larger files, you’ll see a progress bar.

Music-to-XML gives you a few options as it processes the file. First, it asks if you want to unify the time and key signatures based on the topmost staff of each system or the first system of the score, in order to better recognize transposing scores. You can also optionally choose not to unify the signatures. 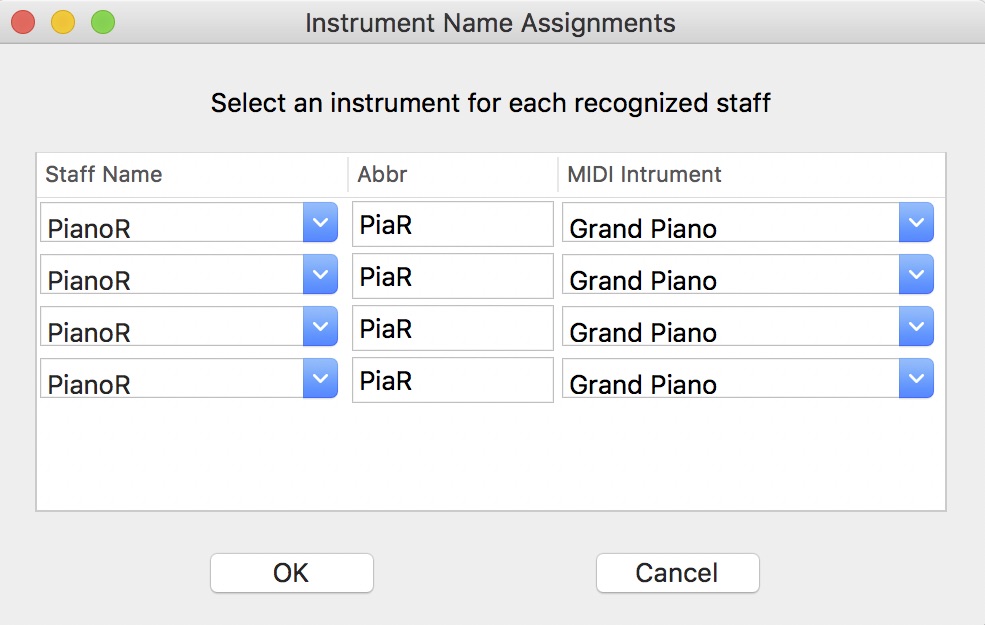 Once recognition is completed, Music-to-XML offers to send it directly to Finale, Sibelius, or Dorico, or save it as a MusicXML file, as described above.

Here are the results I achieved using:

Unsurprisingly, the result I achieved with Finale was virtually identical to that which Mark Adler shared in his post. Of course, the differences among the various programs are attributable chiefly to how each software interprets the MusicXML; Music-to-XML’s output was identical in each case.

Next, I took a photo of another piece using Genius Scan+, which I’ve used with great success for several projects. It does a great job of automatically processing a photo for scanning purposes.

The example I used was a page from the piano-vocal score of Virgil Thomson’s opera Lord Byron, for which I prepared the full score and parts in a newly reduced orchestration by Samuel Bill. The piano-vocal score was set in the 1970s using a music typewriter called the Musicwriter. (Fun fact: The Musicwriter was manufactured in Boulder, Colorado, only a few miles from MakeMusic’s current headquarters.)

I chose this example purposely, to demonstrate that there are plenty of instances where music recognition software could be used legitimately with copyrighted music. To be clear, I am not advocating illegally copying music. But as the engraver, it was part of my authorized task to input all of the vocal lines from the printed piano-vocal score into my Sibelius full score file.

Could I have saved time by scanning them in, instead?

Here, the results were mixed. Music-to-XML did a fine job with the music of the vocal line, only getting tripped up by alternate notes near the end. The English lyrics were mostly correct, but the German translation was spotty (perhaps due less to the language than to the italic font). The piano part was fair, with some impressive results in some places but less so in others. It also missed the time signature changes.

For fun, here’s a video of the process, which demonstrates the results:


For this work, it’s hard to say if it would have been more time-consuming for me to scan in the nearly 300-page piano-vocal score and then spend extensive time cleaning up the results, compared to inputting them from scratch, without actually performing such a test. However, with a simpler piece, it’s entirely plausible that a user — especially one with poor music input skills — could well benefit from an approach using Music-to-XML.

For comparison, I ran the file through PhotoScore Ultimate’s default settings. The results were comparable, with it faring better in some places but worse in others. Generally I found this to be the case in all of the examples I tried.

Finally, I sent a full orchestral score through Music-to-XML. The example here is my own arrangement of America the Beautiful, the score to which you can find on my personal web site. The PDF file I sent through Music-to-XML was exported directly from Sibelius, so it was higher-quality than one that any scan could provide. It’s not a complicated piece.

Even with these advantages, Music-to-XML had trouble with this piece. Suffice it to say that if you were one of the composers concerned about a nefarious user instantly getting a “master key” to any PDF — with score and parts quickly generated, as feared last spring — you can sleep soundly. Here’s the MusicXML output (for this example I took the time to set the instruments in Music-to-XML). Feel free to download it, open it in your preferred music notation program, and compare the results to the score on my web site. Perhaps there are a few nuggets of music that can be easily pasted into another document, but for the most part it’s hardly usable.

This isn’t a knock against Music-to-XML; it’s just the reality of the difficulty that machines have deciphering music notation as more elements are introduced into the mix.

If you have reasonable facility with any music notation software that opens MusicXML (including not just Finale, Sibelius, or Dorico, but those to which Music-to-XML doesn’t directly transfer the file, like MuseScore or Notion), and you have even the occasional need to work with importing music from PDFs, then at $100, Music-to-XML is a real value.

Sure, you can say that it’s $100 more than you would have had to pay if the feature was included in Finale 25, but the upside here is that it will work with any version of any MusicXML-capable software, not just Finale, and it’s a couple of hundred dollars cheaper than a full-blown music recognition package with features you may not need.

You’ll most likely find Music-to-XML useful, say, if you do a lot of arranging where you’re not so concerned with the total accuracy of the result, but you need to quickly get the essence of a piece of music into your preferred software so that you can spend more time creatively working with it and less time on the rote mechanics of note entry.

Another obvious case is if you work with relatively straightforward charts for which you already own the music and need to often transpose them into another key for a particular vocalist.

Ultimately, Music-to-XML, and any other similar scanning utility that might currently exist or come along in the future, is another tool to help us work with music, just like the music notation programs with which it coexists. It’s far from perfect, but it surely has value, and yet it won’t result in the collapse of the music industry. Although the road to get here was bumpy, it’s great that the underlying concept of Music-to-XML has eventually seen the light of day.

Finale's recently announced PDF-importing feature does not spell doom for composers, despite what you may have otherwise heard.

A take on the week's news in music notation and technology, from Sibelius upgrade plans to new Finale features, Logic...