The most notable improvement in MuseScore 3 is the new automatic placement (a.k.a. “autoplace”) facility. Autoplace detects and resolves potential collisions between score elements by automatically adjusting the position and spacing of text, symbols, and staves, while still allowing users full manual control. In addition, more powerful Style and Inspector windows give you more control over the default position, appearance, and behavior of elements. The result is that it is now easier and faster than ever to create scores that look good.

MuseScore 3 is improved in many other ways as well, including an increased focus on usability with new popup Tours to guide first time users, new “timewise” methods for inserting and deleting notes within measures, new Timeline and Score Comparison windows, redesigned and improved Mixer and Piano Roll Editor windows, searchable palettes, new notation features such as automatic system dividers, temporary and cutaway staves, the ability to generate parts from multiple voices on a single staff, named noteheads, an expanded MuseJazz font to give your music a handwritten appearance, and more.

To help users keep their version of MuseScore current, MuseScore 3 now supports an automatic update system. The intention is to move to a more app-like model of having frequent updates – perhaps monthly – as opposed to having releases only every year or so.

MuseScore 3 remains free and open source, and you can download it from MuseScore’s web site for Windows, macOS, and Linux.

A number of the new features will be familiar to users of existing commercial software, although it’s worth noting the particular ways that MuseScore implements features and integrates them into the software. So let’s see what’s new and improved in MuseScore 3.

[Editor’s note: In addition to being a Scoring Notes contributor, Marc Sabatella is the Director of Education for MuseScore.]

The automatic placement facility in MuseScore aims to strike a balance between simplicity and flexibility. The algorithm is designed to produce good results in most cases with no manual intervention required, while still offering full manual control when you need it.

As an example, here is a score entered into MuseScore 2, showing the sort of collisions that users have previously had to resolve manually.

Here is that same example rendered in MuseScore 3.

There are a number of different aspects to what automatic placement is actually doing here:

The following (contrived) example illustrates the order in which automatic placement resolves collisions between a variety of element types.

When you want to take more control over the position of elements, MuseScore allows you do to perform manual adjustments with or without the aid of automatic placement:

Notice that as you move the tempo marking to the left, MuseScore detects that it can be moved closer to the staff, and it does so while still avoiding collisions. Whereas if you disable automatic placement (via the Automatic placement checkbox in the Inspector), MuseScore 3 allows the collision, just as MuseScore 2 would.

In this example, disabling automatic placement also defeats the alignment of the tempo marking with the time signature. Instead, the text is placed directly in line with the note to which it is attached, in accordance with the style and property settings for the text. From this default position, you are free to adjust it however you like.

MuseScore 3 retains the basic model of providing customizable style settings to establish score-wide defaults, and properties set in dialogs or in the Inspector to override these defaults for selected elements. However, MuseScore 3 improves these controls in several ways.

First, the style dialog (now invoked as Format > Style) combines both general and text settings in one place rather than requiring separate dialogs as in MsueScore 2. More importantly, the dialog is now “live,” so changes can be viewed in real time.

When it comes to overriding these defaults, most of the settings that previously required modal dialogs and were only accessible via a context menu have now been incorporated into the Inspector, which is always available (unless you choose to close it) and is also “live.” Furthermore, the properties that correspond to style settings have a Set as style button that allows you to make a change to one element and then have that change automatically applied to all other elements of that type.

Automatic placement itself increases usability in that it means most users will see little or no need to perform manual adjustments or to customize style or property settings, at least for simpler scores — they will generally look good by default. MuseScore 3 also includes a number of other improvements in the area of usability.

New users often find any software as complex as MuseScore to be intimidating, and yet many are also reluctant to go out of their way to consult the documentation. In order to ease the learning curve, MuseScore 3 provides a number of Tours that pop up to provide help as needed.

You can enable, disable, or reset the display of these in Help > Tours.

MuseScore continues to be based primarily on a “replace” or “overwrite” model of input and editing, where newly entered notes and rests replace existing ones. However, MuseScore 3 now supports “timewise” note input and editing, where notes or rests can be inserted into or deleted from a measure. Subsequent notes or rests will be moved later or earlier and the length of the measure increased or decreased accordingly. This can be used to correct errors during note entry or as a way of creating unmetered music.

A number of menus and windows dialogs have been redesigned to increase their usability. For instance, the main Palettes window is now searchable, allowing you to easily find the specific symbols you are looking for.

The master Symbols palette, (View > Master Palette… > Symbols) — containing thousands of symbols from the open source Bravura font — is now organized by category as well as being searchable by name. 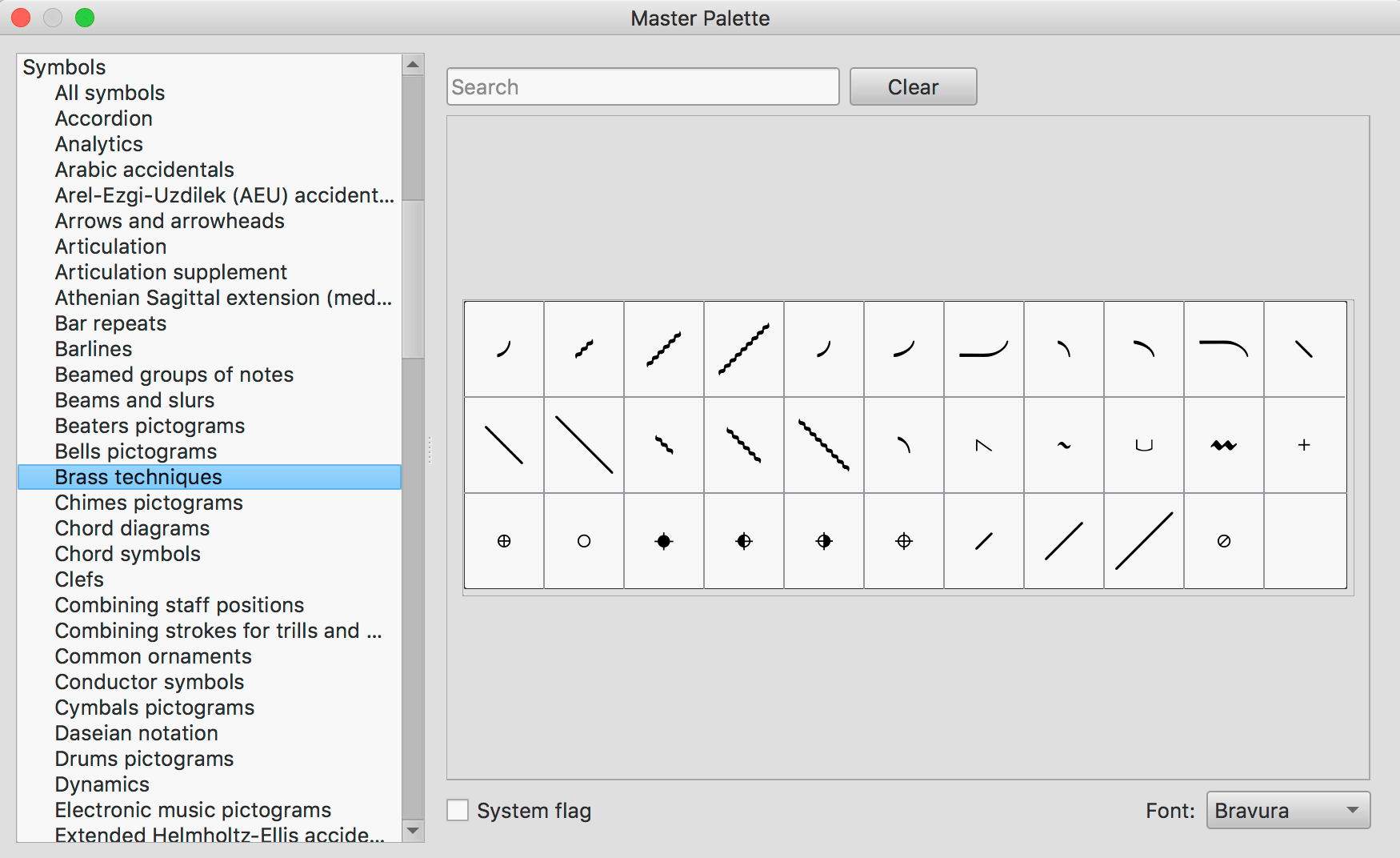 The new Timeline window (View > Timeline) displays an overview of your score, showing rehearsal marks, changes of tempo, key, and time signature, and indicating during which measures each instrument is playing. This enables you to quickly jump to particular locations in your score.

The Score Comparison Tool shows you the differences between two versions of a score. To invoke it, go to View > Score Comparison Tool. Specify the two scores you wish to compare, hit the Compare button, and the two scores will be displayed side by side with a list of differences below. Double-click any listed difference and both scores will be positioned to show you the corresponding element, which will be highlighted.

This tool can be used to track changes made since last saving a score, to compare different saved versions of a score over the course of its development, or to check a student’s work against an answer key.

Several of the windows used to control playback in MuseScore 3 have been redesigned and improved.

The Mixer window (View > Mixer) now allows for more precise numeric control. Further, it collapses multiple channels for an instrument into a single column that can be expanded when needed. The Mixer also adds the ability to mute by voice.

The Piano Roll Editor (accessed via right-click on any measure of any staff) is also greatly enhanced, allowing fine control of the playback of each note in your score. You can insert and delete notes, change their pitch, move them between voices, edit the start time, length, or velocity of multiple notes using a graphical interface, and more.

MuseScore 3 includes a number of new palette symbols such as additional clefs, accidentals, and articulations.

MuseScore 3 also features new layout controls such as automatic system dividers you can add via Format > Style > System and a new “fixed” staff spacer (found on the Breaks & Spacers palette) that can be used to force staves closer together as well as further apart than your style settings and automatic placement would otherwise determine.

In the Staff Properties dialog, you will find new options for temporary and cutaway staves as well as named noteheads. You can also change staff properties such as staff size mid-score using the new Staff Type Change element found on the Text palette.

The parts facility in File > Parts now allows you specify which voices of a staff should be included in a part, allowing you to combine multiple parts on a single staff in the score.

The MuseJazz font has been greatly expanded and can now provide a handwritten look to all elements in your score, not just the text. To select this (or another music font such as Emmentaler, Bravura, or Gonville), go to Format > Style.

MuseScore 3, with automatic placement and other new features, is a significant step forward. It not only helps users create professional-looking scores more easily than ever, but it also makes MuseScore a worthy option among the top tier of desktop notation programs.

Development of MuseScore is ongoing. As stated above, the intention is to deliver more regular updates to fix bugs and add new features. Work is currently underway to improve the playback of MuseScore both in the actual sounds but also in the interpretation of score markings. For example, one popular user request that is in the works is dynamic changes (crescendo and diminuendo) within a single note.

As mentioned at the beginning of this article, MuseScore 3 remains free and open source, and it is available to download for Windows, macOS, and Linux from MuseScore’s web site.

[Editor’s note: Marc, in his role as director of education for MuseScore, offered the following additional information: “Going forward, education is going to be an increasingly important focus for MuseScore. My task is to help users master the software. I intend to reach out to schools over the coming months to help support them in their use of MuseScore. More information is available at Mastering MuseScore — including a printed reference guide, a new online course, and an educational partnership program.”]

Musescore 3.4 is available with usability and accessibility improvements. On the Musescore.com side, the five-score upload limit has been removed,...