MuseScore has released version 3.6 of their flagship notation software for Mac, Windows, and Linux computers. This release is primarily focused on engraving improvements that not only affect both the appearance of the music on the page, but aim to improve the user experience with regard to setting up scores, formatting, and layout.

Of particular interest to music notation aficionados is the release of a brand-new, SMuFL-compatible music font called Leland, designed by MuseScore lead designer Martin Keary in collaboration with music engraver Simon Smith. Drawing inspiration from the look of scores produced by the legendary SCORE program and its creator Leland Smith, Leland is the new default music font for MuseScore beginning with the 3.6 release.

Paired with Leland is a new text font heavily based on New Century Schoolbook called Edwin, which is the new default MuseScore text font. Both Leland and Edwin are free, and they are released under open font licenses.

MuseScore development team leader Vasily Pereverzev, in a news article announcing the release, said that MuseScore 3.6 is their “engraving release” and that “it addresses many of the biggest issues affecting the layout and appearance of your sheet music and is the result of a massive collaboration between our community and internal team. It is the first big step towards the type of world-beating engraving capability that we aim to achieve in the future.”

World-beating aspirations aside, MuseScore 3.6 does take significant steps in improving the user experience and ultimate output when it comes to producing music notation, bringing MuseScore more in line with what one would expect from a modern music notation software program.

Surprisingly, prior to 3.6, MuseScore did not order, group, or bracket instruments automatically, leaving it up to the user to do this. The instruments were ordered simply in the order the user added them to the score.

Now, when creating a new score via Choose Instruments, there is now an Ordering dropdown showing the current system of instrument ordering, with Orchestral as the default. As instruments are added to the score, they will be added in the correct position according to the scheme chosen (choir, concert band, and big band are among the other choices). 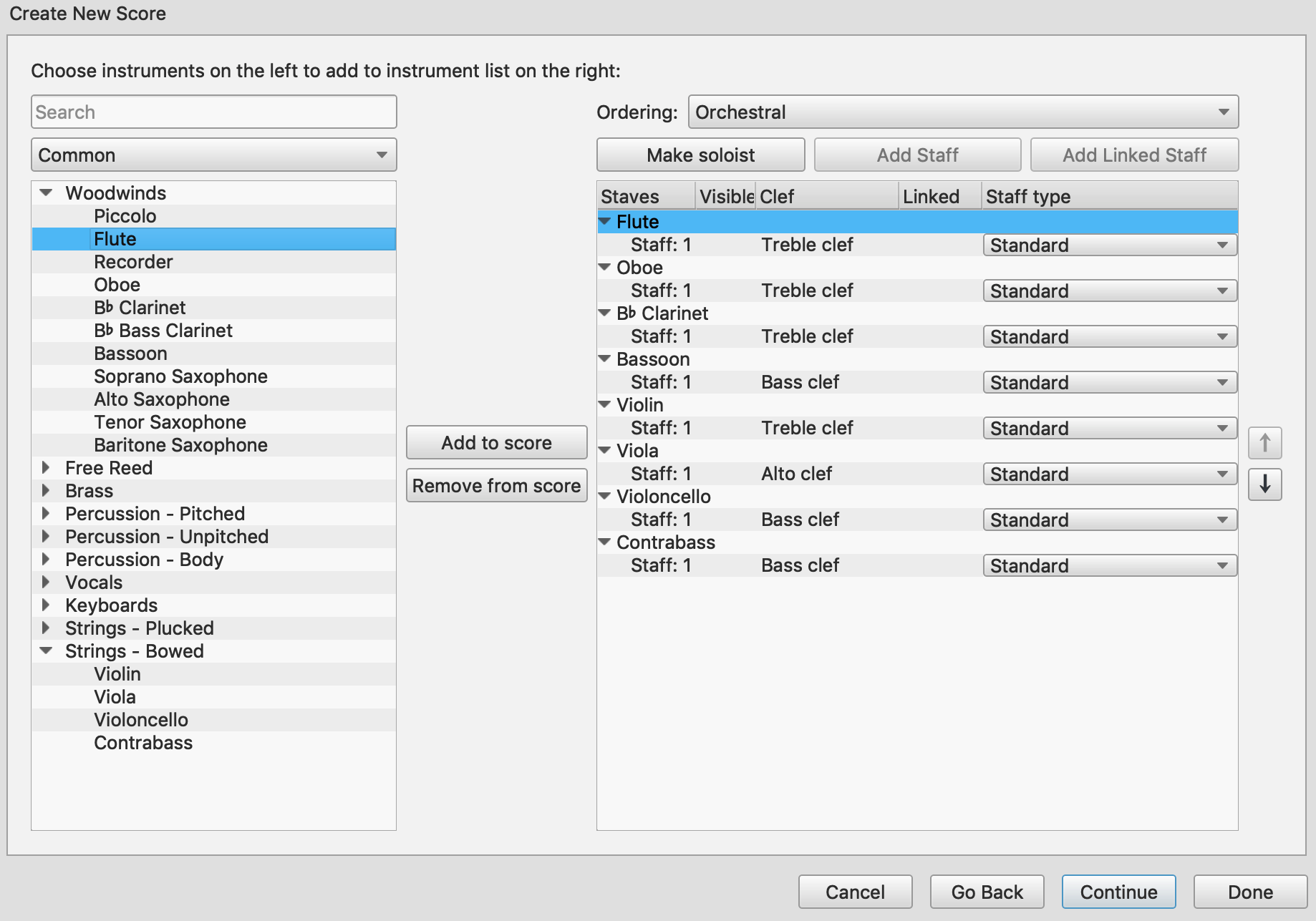 There is nothing revolutionary here, since this is something Sibelius and other software programs have done for a long time, but MuseScore users will be very happy to shave some time off of the score setup process.

Again, it may surprise non-MuseScore users that this seemingly basic feature is only now being added to the software, but it is a welcome improvement nonetheless.

Another very welcome improvement is automatic vertical justification of staves on the page. This is an area in which most users will notice an immediate difference in appearance when this is enabled.

The settings for this are found in Format > Style > Page > Enable vertical justification of staves. It is on by default in newly created scores, but you will need to turn this on for existing scores. 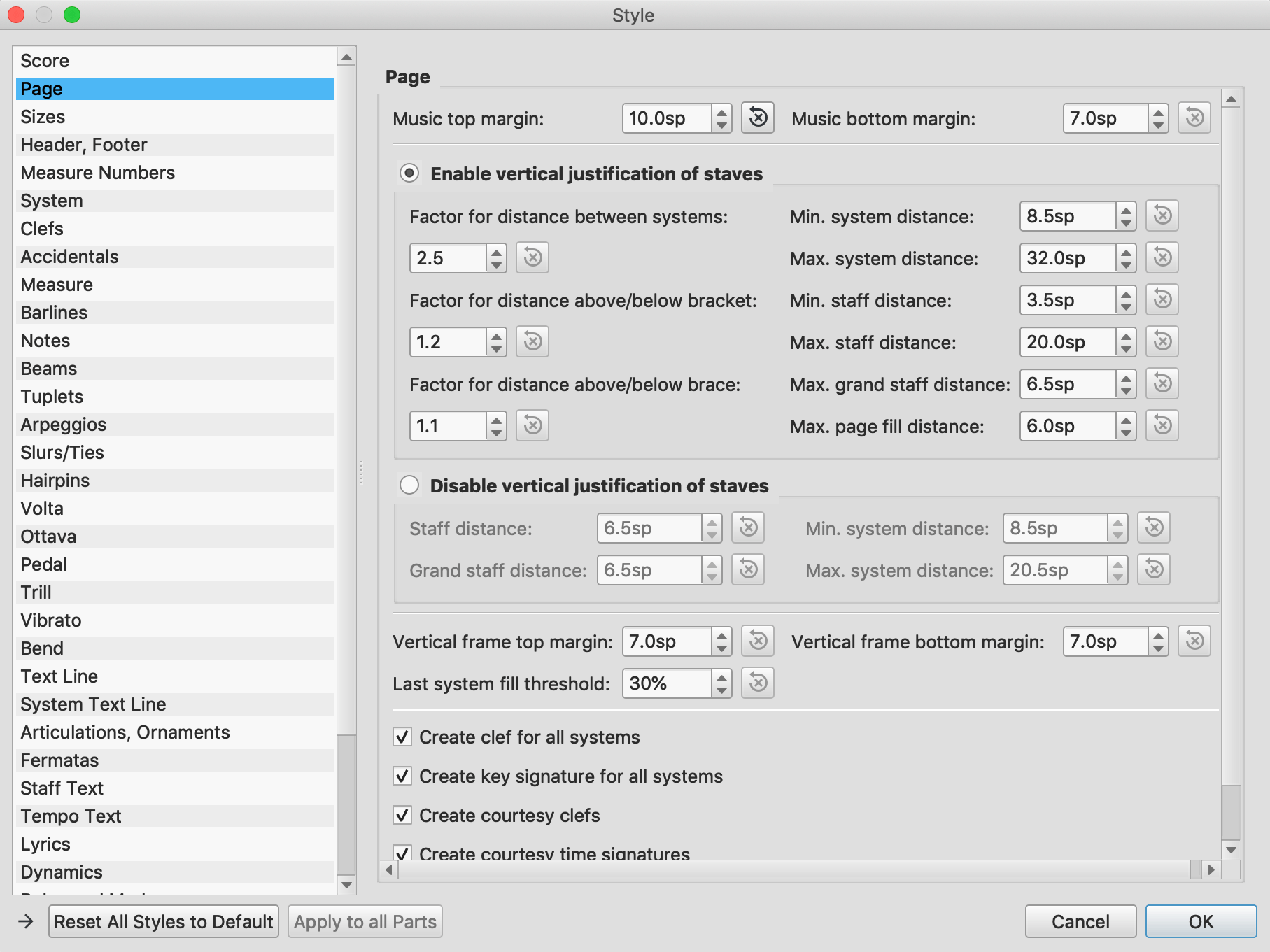 The settings are quite straightforward and you can adjust to taste, with separate settings for additional space between staves with brackets and braces. The space between a brace and bracket will be determined by the larger of these two values.

These are not done with absolute values, but rather with relative values using a “factor” method. For example, if this is set to 1.5, the algorithm will attempt to make the space on either side of a bracket 150% of the standard space used elsewhere.

Until the 3.6 release, MuseScore users have had to rely on the method of applying breaks and spacers in the score, and then adjusting them, in order to finesse vertical layout on a page:

This release represents a significant change to that process. Martin Keary said that “If you’ve spent a lot of time using page breaks and spacers in previous versions of MuseScore, it is advisable to remove them first to let the vertical spacing system do its thing. You can then make any changes you see fit afterwards. In general, you’ll find that our new system requires a lot less manual tweaking, with much better overall results.”

There is also a new option to automatically indent the first system of a score, at Style > Score > Enable indentation on first system. The use of a horizontal frame to achieve this is no longer needed.

A more complete explanation of these settings is provided in this new entry to the MuseScore handbook.

A number of other engraving fixes and improvements are included in MuseScore 3.6:

Designed by MuseScore lead designer Martin Keary in collaboration with music engraver Simon Smith, Leland draws inspiration from the look of scores produced by the legendary SCORE program and its creator Leland Smith (no relation to Simon).

SCORE — a DOS-based program — was developed in a very different era than today’s modern software, but owing to the talents of its creator and the skill of its users, it was capable of producing very high-quality output.

It may be of interest to some that there isn’t an official “SCORE font”, owing to the particular way the program created its symbols for output using vector-based drawing instructions. So Martin and Simon needed to start with a fresh approach.

Martin said, “When setting out to create our font, Simon and I agreed on a few goals: First, we wanted the notation style to function as the new default in MuseScore, so our focus was on creating a highly finessed version of the classic notation style. Second, we particularly wanted to match the feeling of precision and balance that SCORE had so successfully achieved. Third, since legibility is of the utmost importance, we wanted to avoid the impulse to make something really flashy that draws attention to itself. In a way, we wanted to make the Helvetica of music notation, with everything feeling just right so performing musicians almost don’t know what’s there.”

Indeed, the “Helvetica” analogy is apt. Music set in Leland looks very clean and well-proportioned. And when paired with the Edwin text font, we are starting to approach something of a convergence in (at least superficial) appearance among some of the major software platforms — Dorico uses its own version of New Century Schoolbook, called Academico, which is also the bundled with our Scoring Express templates for Sibelius, as well as the standalone Norfolk font download.

The Edwin text font is named after Edwin Ginn, who founded Ginn & Company, the publisher which commissioned the original New Century Schoolbook in 1918. Edwin is essentially a release of a font called C059, created by URW++ Design and Development (later URW Type Foundry and subsequently owned by Monotype) and released for free under an open license.

Suffice it to say that the casual or even expert user will be hard-pressed to notice the differences between Edwin, Academico, and New Century Schoolbook, although any attempt to drop in one for another should still be done with care. But if you enjoy the look of New Century Schoolbook and itch to use it in your music but don’t have the spare cash for a license, either Academico or Edwin will likely suite your purposes nicely. It will also make it easier to legally collaborate on scores using this font, as it may be shared freely.

(Fun font fact: Another URW font, the P052 Palatino clone, comes bundled with our Scoring Express templates for Sibelius, and are widely used in the Theatre & Studio collection.)

In his inimitable way, Martin’s alter ego Tantacrul dives into the minutiae of creating of the new MuseScore fonts, along with the history of SCORE and other fascinating details in his latest video, which is highly recommended viewing ahead of anything in your Netflix queue:

For those wondering, at NYC Music Services we plan to make a Sibelius-compatible version of Leland, in a similar way we have done with Norfolk and Pori, with the full cooperation of the MuseScore team. Stay tuned!

When you open an existing MuseScore document, you are presented with options to apply Leland, Edwin or both. 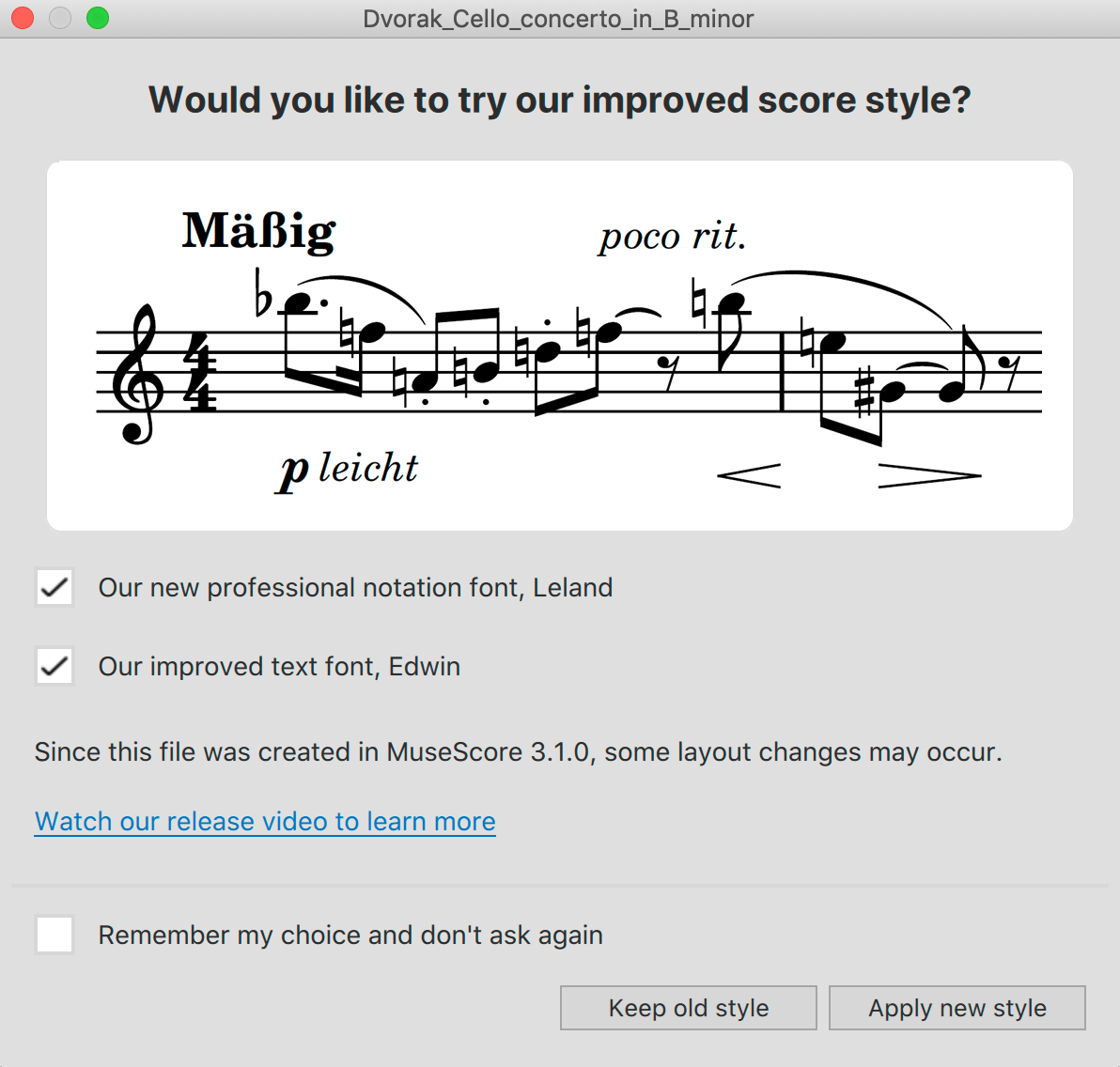 The dialog is a bit misleading; although it will update the fonts in your document, it will not update your document to the newer style settings, despite the “score style” language.

For that, you’ll need to head over to Format > Style and click Reset All Styles to Default. The MuseScore handbook states that “This was formerly the Format > Reset Style menu option. The button behaves the same way, except that it no longer resets the page layout options which are set in the Format > Page Settings window; that window now has its own equivalent button, which will reset only those settings it contains. This means that the new style options can be tried out without completely ruining the layout of the score, though a few settings in the Score and Page settings of the Style window may need to be re-set manually.”

Other items which may need to be adjusted to take advantage of the latest MuseScore features:

MuseScore 3.6 is available now from the MuseScore web site for Windows 7 or higher, macOS 10.10 or higher, or Linux.

MuseScore is free, as usual. It’s encouraging to see such attention paid to engraving details in a free product, and the advancements in 3.6 are significant. While its features don’t (yet) totally match up to those in the commercial products, if you haven’t tried MuseScore, or haven’t looked at it in a long time, you’ll enjoy downloading it and seeing what’s possible. You can quickly export MusicXML from another program and bring it into MuseScore and take it for a spin.

For current MuseScore users, of course, there is only upside to updating to 3.6.

The new Leland music font is a huge bonus for those users that are looking for ways to distinguish the visual appearance of their music. It will need another iteration or two to gain some of the secondary symbols that are present in some other fonts, and although this version represents the fifth revision of the font already, Martin has said, “I’m almost certain that I’ll have to do a sixth, and probably a seventh revision before the next version of the font is released. We’ll need to collect a lot of user feedback and add hundreds more symbols before we’ll be even close to done.” Still, it’s very usable already and we are confident it will be even more so in time.

Martin also said this about the release of MuseScore 3.6 and the future of the product: “Although these new defaults mark a giant step in the engraving quality of MuseScore, we’re by no means done, and you’ll be seeing further big advancements in the future.”

To that end, we spoke with Martin and Daniel Ray, MuseScore’s director of product strategy, on the Scoring Notes podcast, where they discussed their road map for MuseScore 4.

Coinciding with today's official release of MuseScore 2.0, we have a roundup of the program's new features as well as...