MuseScore 3.3 is now available. Redesigned palettes, accessibility enhancements, and updates to the plug-in framework are among the improvements in this release. As usual, there are a number of bug fixes and other improvements. A handful of these are especially noteworthy, as much for the stories behind them as for the improvements themselves. One of the new features involves a new font that users of other notation programs can take advantage of as well. For more information, read on!

The most significant change for most users is the redesigned palette facility. Actually, at first glance, you won’t see more than some cosmetic differences, and the basic use model has not changed — you can either drag and drop an icon from the palette to an element of your score, or select one or more elements in your score then double-click a palette icon.

Here is a side-by-side comparison (old palettes on the left, new on the right): 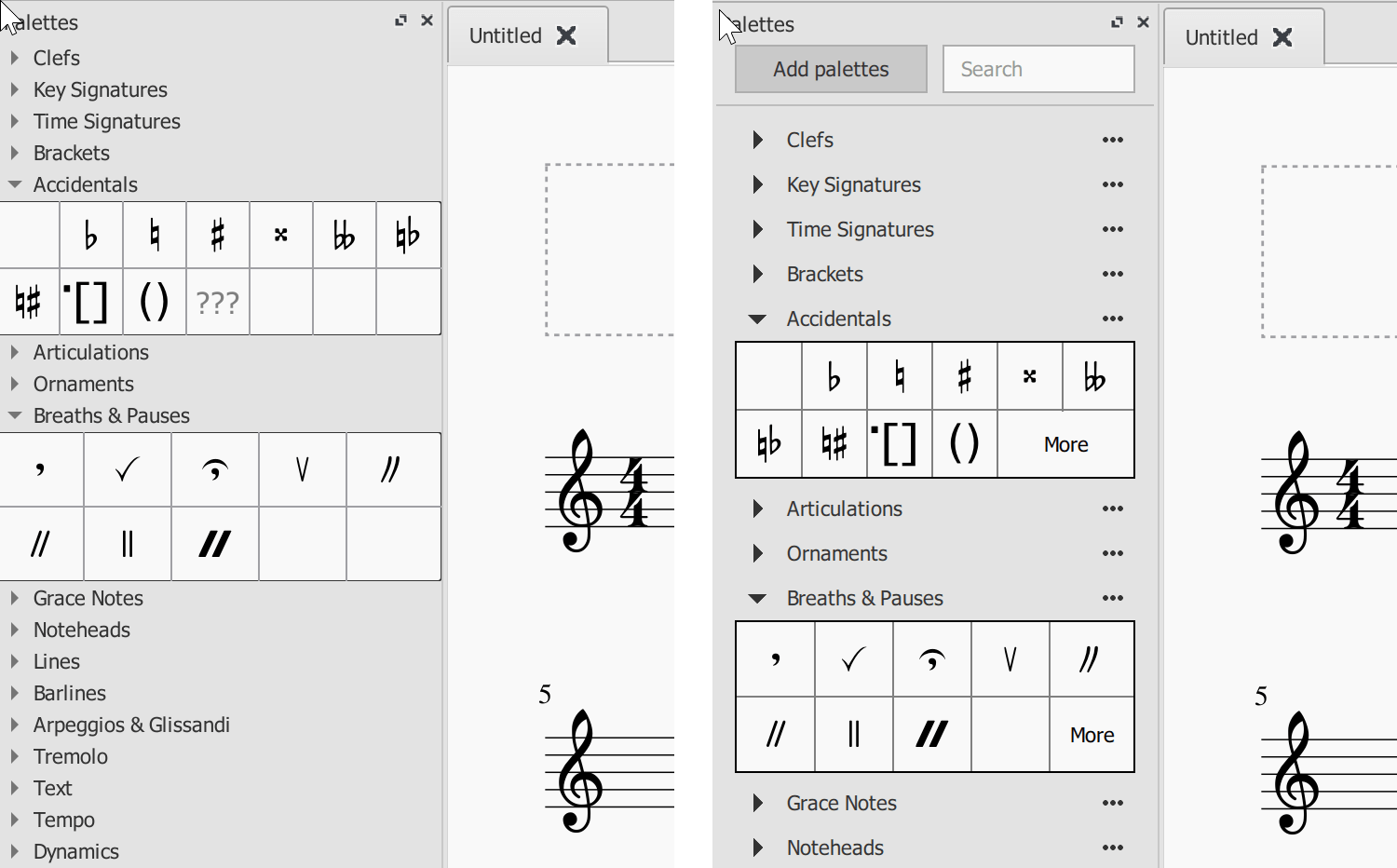 While they may look similar, much has changed under the surface, with two important benefits: easier customization, and keyboard navigation. Before I go into that, I want to step back and talk about the genesis of these changes.

I mentioned that the stories behind the improvements are sometimes as noteworthy as the changes themselves, and and this is one such case. The new palette system was designed by none other than Martin Keary, a.k.a. Tantacrul, whose video reviews of both Sibelius and MuseScore created something of a sensation in the notation community over the past year. After the release of Martin’s review of MuseScore, we started working on addressing his concerns.

I would also like to recognize Dmitri Ovodok, one of our lead developers, who did most of the actual implementation work.

With that said, now I will turn to the changes themselves.

MuseScore has hundreds of symbols on its main palettes, with thousands more available from the master palette (many of them courtesy of the open source Bravura font from Steinberg). We have long struggled with the question of how to best suit the needs of a diverse set of users, from beginners to expert users. So far we have relied on providing a Basic and Advanced workspace you can choose between and allowing users to create their own custom workspaces and add or remove palettes and individual items.  The customization capabilities themselves were powerful, but the process was hard to discover and much more cumbersome in practice than we would have liked, and Martin rightly saw that.

With the new palette design, customization is much simpler.  Adding, deleting, and reordering palette elements – and entire palettes – is now accomplished through simple drag operations and other intuitive gestures. I will let Tantacrul explain further:

MuseScore 3.3 now supports full keyboard navigation of the palettes, including an improved search mechanism and a shortcut to apply the first search result or reapply the last-used palette item. The ability to navigate the palette by keyboard can allow for more efficient entry of symbols, but it also opens up the use of the palette to people unable to use a mouse — an important part of our accessibility initiative (see below).

In addition to his palette redesign, Tantacrul also made some suggestions regarding the note input process, with a focus on making the process easier for beginners and to work more consistently. For MuseScore 3, Matt McClinch implemented many of these suggestions. The changes are minimal for existing users, but for new users who do not yet understand how things work, we hope the process will be easier to discover.

The main change for new users is that clicking a duration button on the toolbar with nothing selected will now put you into note input mode automatically — no need to first press the Note Input button. Those buttons tend to be the first things a new user tries to click, so this will help them get started. Also, the accidental buttons on the toolbar now work more like the duration and rest buttons: as toggles that affect the next note you enter (rather than the note previously entered) in note input mode. This change will also be welcome by those users who have requested a way to enter notes with accidentals directly, rather than needing the enter the note with no accidental first (which causes the “wrong” note to play) and then add the accidental. Users accustomed to entering accidentals using the arrow keys are not affected.

There are other small refinements to the process as well, including a better algorithm for determining where to begin note input when nothing is selected or when something other than a note, rest, or measure is selected, resulting in fewer cases where the score jumps to the beginning on note input for no obvious reason. Conversely, we also fixed some cases where edits to an off-screen selection did not reposition the view.  The goal has always been for the score to reposition when you want it to and not when you don’t, and this release should be better in that regard.

Over the years, we have tried to make the accessibility of the user interface a priority, with some success.  Ever since the release of MuseScore 2, blind users have been able to use MuseScore to read existing scores, and we have gradually refined that capability since then to give more control over navigation.  But until now, many operations have still required the use of a mouse or have failed to provide appropriate screenreader feedback, making MuseScore unsuitable for blind composers and music students who wished to create music of their own.

For MuseScore 3.3, we made a concerted effort to overcome the remaining accessibility hurdles.  With a number of improvements to the navigation commands (especially the previous/next element commands Alt+Left/Right), enhanced support for the open source NVDA screenreader, plus the new palette design that allows for full keyboard control, we are proud to say that we have finally reached a point where a blind user can not just read but also create and edit scores, with almost all of the features of the program accessible. MuseScore is one of the very few scorewriters that can make that claim, and we think this is going to be a game-changer for many blind musicians.

I am proud to have played a role in making this level of accessibility possible. Other contributors to this recent push include Dmitri Ovodok, Peter Jonas, and Joachim Schmitz.

Much of the original groundwork for accessibility was laid by Andrei Tuicu and Divya Raghunathan. Long-time contributor Leon Vinken also made many improvements to our MusicXML import and export, many of these specifically to aid with translation of scores to Braille. Braille export is not something MuseScore does directly, but MuseScore user Hu Haipeng has been a leading force in the effort to provide Braille scores for as much music as possible, and conversion to and from MusicXML is often a part of the process of creating a Braille edition of a score.

Readers of Scoring Notes may recall a recent article on the development of the open source Figurato font for figured bass by Florian Kretlow. Figurato relies on sophisticated OpenType techniques, including extensive use of substitution and positioning rules to format ordinary text in surprisingly complex ways with no need for special figured bass support in the underlying software.

Inspired by this example, I decided to create a font based on similar concepts for use with Roman numeral analysis. My font is built on the open source Doulos SIL font for the symbols themselves, but I added substitution and positioning rules that allow you to type in plain text and have it automatically rendered with the traditional Roman numeral analysis formatting (e.g., conversion of “b” and “#” to “♭” and “♯”, superscripting and vertical alignment of interval designations).

I call this font Campania, and like Figurato it can be used in any program that supports OpenType substitution and positioning rules.  I have released Campania under an open source license, and it is available as a free download separate from MuseScore, so you can use it today in your favorite notation program or text editor.

While Campania works in many different programs, MuseScore 3.3 adds features to facilitate its use. We have embedded the font in the installation package, so you do not need to install it separately, and you can use Add > Text > Roman Numeral Analysis to enter your analysis similarly to how you would chord symbols. Campania allows you to type normally and automatically formats it for you; MuseScore allows you to press Space to move to the next note or beat, etc.

While we were at it, we also added support for Nashville notation that can be entered in a similar way (Add > Text > Nashville Number).

Now, for MuseScore 3.3, we have added additional capabilities that dramatically extend the range of what plug-ins can do.  A not-too-technical summary is that plug-ins can now access information about different types of selections, they can change playback properties, and perhaps most significantly, they can be informed about changes to the score, thus allowing them to update their own user interfaces in response to edits made outside the plug-in. Much of this work was performed by Dale Larson, and it was the plug-ins being developed by Bernard Greenberg that provided the impetus.

For examples of what can now be done, see Bernard’s ingenious plug-ins for control of articulation and ornament playback:

And also this implementation by Dmitri of a guitar fretboard for note input:

We are committed to continuing to build a community of users and developers and to constantly improve the software and services we provide. We welcome your participation in this community!

Musescore 3.4 is available with usability and accessibility improvements. On the Musescore.com side, the five-score upload limit has been removed,...