The company that already owns the music notation software and online catalog MuseScore and the Ultimate Guitar community and guitar tab catalog has announced its acquisition of Audacity, the popular free audio editing software. Together with its support of the assignment management platform MuseClass and song learning and effects app Tonebridge, the new company is known as Muse Group, it announced in a press release this week.

Muse Group, according to the release, “provides digital tools, resources, and content to musicians at each stage in their personal development. Executive roles and company leadership of Ultimate Guitar will transition into similar roles in Muse Group with no other major structural or operational changes within the individual portfolio companies.”

Ultimate Guitar was founded in 1998 by Eugeny Naidenov, and he will continue on with the company in the role of Muse Group chairman. “This move is a natural progression in our evolution as a company, allowing us to better support a collection of brands aligned around a shared purpose – to continually improve the quality of life for the ordinary musician,” Naidenov said.

Ultimate Guitar acquired MuseScore in 2017 and announced that acquisition publicly in February 2018. “Our acquisition of MuseScore was simply a first step beyond the guitar segment,” Muse Group CEO Michael Trutnev said, “and as we moved from guitar tabs into music notation and recently into education with MuseClass, it became clear that our current goals and future ambitions can be better served by organizing support for our brands under a new structure.”

In a video posted today on his popular Tantacrul YouTube channel, Martin Keary announced the move and gave an overview of the history of Audacity, including interviews with some of the key people involved in the project. Martin, who was previously head of design for MuseScore, will continue that responsibility in an expanded role as head of creative tools for Muse Group, to include MuseScore and Audacity.

We spoke with Martin Keary and Daniel Ray, Muse Group’s head of strategy, on the Scoring Notes podcast in July 2020, and we will look forward to learning more about their new and upcoming plans in the future.

On the Scoring Notes podcast, Daniel Ray and Martin Keary join us to talk all about MuseScore. Learn about the origins of Tantacrul, the way MuseScore aligns with the goals of Ultimate Guitar, and the plan for what’s to come in MuseScore 4. Listen now: 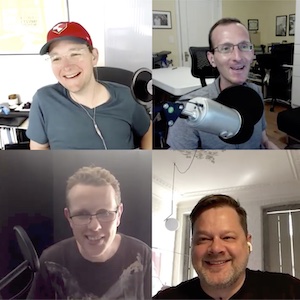 MuseScore has released the 2.2.1 update to its desktop notation software, introducing a new default soundfont and other playback improvements,...

Ultimate Guitar, the online community of millions of guitarists that creates and shares guitar tablatures, announced today that it has...