To start off your week, here’s a roundup of recent and future updates to products in and around the world of music notation.

Updated April 12, 8:30 am with comments from Avid’s Joe Pearson.

The Musikmesse fair in Frankfurt concluded yesterday. At the fair, Avid gave a preview of what’s to come in the yet-to-be released Sibelius 8.3:

Sibelius has long had the ability to color notes, but if you applied a color to one note in a chord, the color would appear in all notes and articulations in that chord.

The ability to color individual notes in a chord has long been on many a user’s wish list, including Bob Zawalich, who, along with Kai Struck, wrote an elaborate plug-in using graphics as noteheads to work around the limitation.

In the upcoming Sibelius 8.3, you’ll be able to color notes and articulations individually without needing the plug-in workaround.

ManuScript will have access to this as well. Sibelius product designer Joe Pearson said, “In fact, this is the heart of the feature. We’ve been able to extend the existing ManuScript color APIs so that most plug-ins will naturally already be compatible with the new functionality. We’ll be updating those plug-ins which aren’t. Of course, users will also be able to individually color noteheads manually using the tools in the Ribbon.”

Sibelius 8.2 introduced a promising new sliding feature, which moves notes in time but also left unwanted rests behind. With Sibelius 8.3, it appears that the rests will be tidied up, making the feature much more useful.

A release date has not yet been given for Sibelius 8.3. It’s notable, though, that we are starting to see announcements of new features — and improvements upon existing ones — prior to release.

Dolet updates for Sibelius and Finale

Dolet, the free MusicXML plug-in for Sibelius and Finale, was updated last week.

MakeMusic’s Michael Good said that “Dolet 6.6 for Sibelius exports files much more quickly than previous versions. On Mac it can export 50% faster. On Windows, export can be 5 to 10 times faster, with more improvement for larger files.” This is an especially notable achievement for the plug-in, which, unlike Sibelius’s built-in MusicXML export, must run within the limitations of the ManuScript plug-in framework.

Dolet 6.7 for Finale is an even more significant update, adding a preferences menu when running in Finale 2014.5. You may set preferences for exporting different versions of MusicXML, exporting compressed or uncompressed files during batch export, and validating against the MusicXML DTD or XSD. This restores features that were dropped in Finale 2014.5 in version 6.6 while making them easier to access and use. There is also an option to silence error messages: 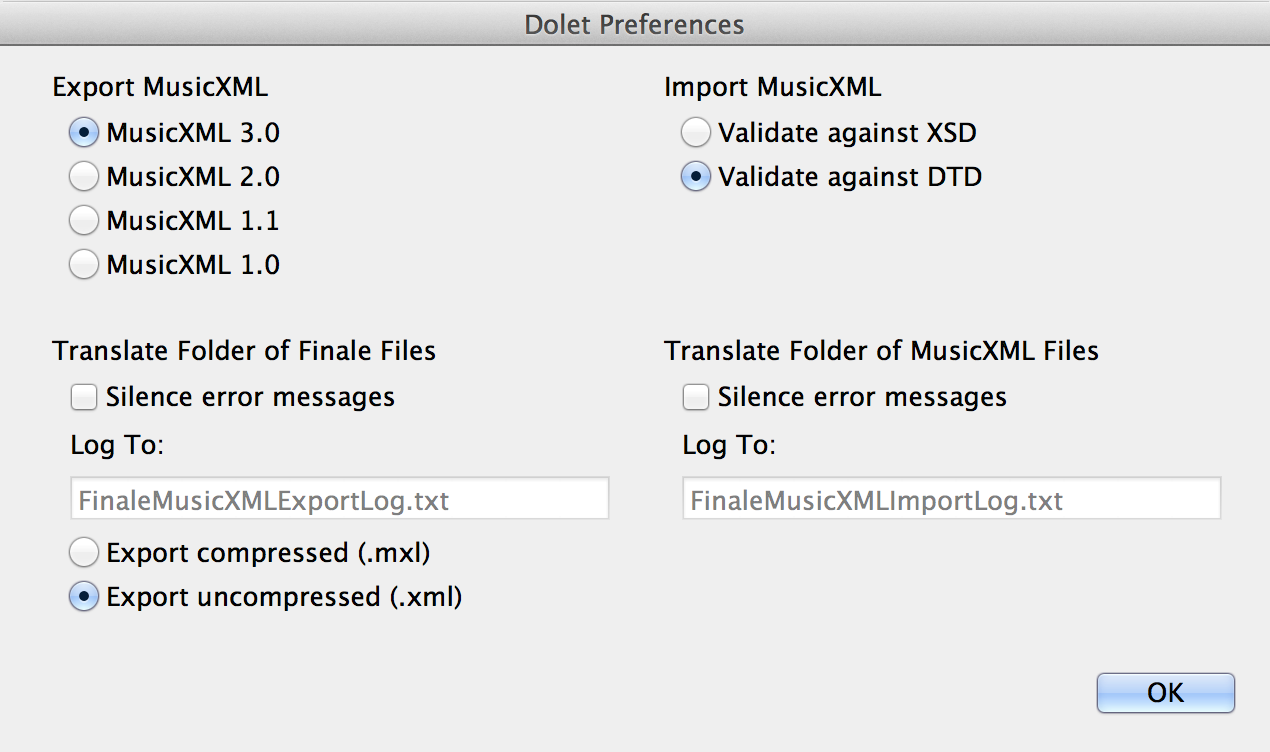 Of all of MakeMusic’s products, the interactive learning software SmartMusic is the most natural fit with it’s parent company Peaksware, whose mission is “to help guide people along their journey of improvement through a unique approach to deliberate practice.” Last year, MakeMusic invested in the future of SmartMusic by acquiring French company Weezic, “in order to focus the entire team’s efforts on a web-based solution of SmartMusic.”

Educators can visit the SmartMusic page to learn more about the feature comparison between the new and current SmartMusic and use an interactive calculator to estimate costs (which start at $399 for up to 3 teachers and up to 50 students).


The new SmartMusic is in beta testing and MakeMusic plans to make it available “in time for back-to-school 2016.”

Rounding out the updates is MuseScore 2.0.3, the latest version of the free desktop software. Although MuseScore is calling this a “minor update,” there are still more than 200 changes according to the release notes.

The release focuses on bug fixes, but a healthy number of new features have made their way into the release as well:

In addtion, Linux users can directly download MuseScore 2.0.3 for their systems, just like Windows and Mac users. MuseScore said that this is possible thanks to the AppImage packaging format.

Most notably, MuseScore announced that they have begun work on MuseScore 3.0, and have promised more news about their roadmap to come soon: “The changes lined up are every bit as significant as the changes that went into making MuseScore 2 from MuseScore 1.”

Visit the MuseScore web site to download the latest update for your operating system.