I remember when I first downloaded MuseScore 0.9.6 some five years ago. As I recall, the supporting documentation consisted of just a handful of pages containing the basics of how to use the program, very much in keeping with the freeware nature of the product at the time.

Fast-forward to MuseScore 2 — the program is still free, but it has evolved and matured into a robust, powerful and impressive music notation package. The online help manual, known as the Handbook, runs some 185 pages when downloaded, and is available in a variety of languages, maintained by the MuseScore community.

The online manual, however, while being a useful and essential reference, is not organized in a way that is conducive to easy reading. The best software guides seem to still be the ones that you can read while on your sofa or in a café and absorb the material so it seems like the author is personally guiding you along. 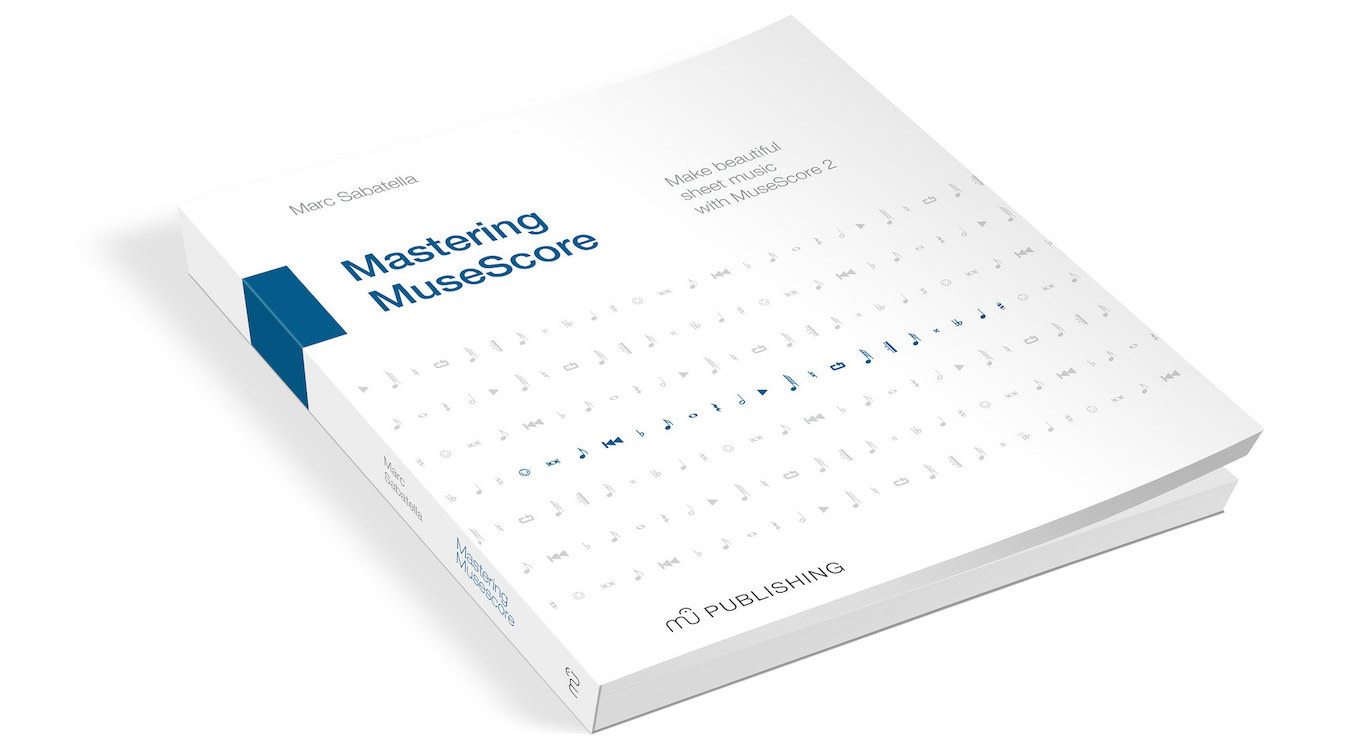 It’s in that spirit that jazz musician, educator and MuseScore expert Marc Sabatella wrote Mastering MuseScore, a thoroughly comprehensive and engaging 387-page guide to MuseScore 2. Published by the MuseScore BVBA (the official company that owns the MuseScore software) and available for $40 from Amazon, it’s logically organized in five large sections that you can read in sequence or jump around if you prefer. Best of all, it’s actually published as a real, tangible softcover book that can sit on your bookshelf within easy reach. Should you wish to put the book on your e-reader, one has been promised in the near future, but was not yet available at the time of this review.

After some preliminary material and an introduction to some of MuseScore’s basic windows and palettes, Mastering MuseScore begins with a quick tutorial called Your First Score, which guides you through the process of creating eight bars of the familiar song “Mary Had a Little Lamb”. The tutorial covers the basics of entering notes, rests, rhythms and lyrics, and also briefly touches on page text and playback.

Here the book suffers a bit from an identity crisis, as the tutorial approach is abandoned henceforth, relying instead on many unrelated small examples to illustrate concepts and features. If you are looking for the satisfaction of completing a larger project from beginning to end with the book’s guidance, unfortunately you’ll have to look elsewhere — there aren’t any other lessons or exercises included with the book.

However, to look at it from a more positive angle, the remainder of the material is clearly and briskly organized, so if you prefer that your information not be buried in a lesson that you have no intention of completing, then you’ll feel right at home with Mastering MuseScore. The remaining four sections — Note Entry and Editing, Other Score Elements, Staves and Layout, and Working with MuseScore — deftly begin by describing basic operations but seamlessly introduce more complex concepts without feeling overwhelming. Many pages have insets which helpfully explain the reasoning behind a feature or action.

Marc brings a personal touch to the book, writing in the first person without overusing the technique, which makes you feel like he is gently guiding you along: “In this section, when I use the word ‘chord,’ I am describing how to add multiple notes that share a single stem. By the way, it is also possible to have multiple notes that sound at the same time but do not share a stem.” A cross-reference to the section on multiple voices is included here, and it should be noted that the advance copy of the electronic version of Mastering MuseScore that I received made good use of hyperlinks within the book, which bodes well for when the electronic version is made available.

The writing in Mastering MuseScore is more workmanlike than that which is in the Sibelius Reference, which still largely bears the fingerprints of Daniel Spreadbury, Ben Finn, and Jonathan Finn, with its breezy quips and fun (in addition to being an extremely well-written, thorough manual). Nor does it benefit from the extensive cross-referencing and long history of a reference like the one for Finale, which has 11 tutorials, an interactive Visual Index, tips for best practices, and a provenance that includes authorship by prolific tech columnist and author David Pogue. And while the design elements of Mastering MuseScore make strike some as rather spare, it’s clear that the focus of the book was on quality content, not flashy bells and whistles.

Whether you’re trying MuseScore for the first time, or you’re a more experienced user looking to push the software further, the $40 spent on Mastering MuseScore will be a wise investment. After all, the software is still free!