At our NYC Music Services web site we’ve released some major updates to the Pori and Norfolk fonts for Sibelius. These fonts are derived from Steinberg’s Petaluma and Bravura SMuFL fonts, respectively, and are expressly reconfigured as suites of fonts that are compatible with Sibelius.

There’s a lot here, so we’ll cover each item step by step. But if you can’t wait, go ahead and download the fonts now for free (donations and pay-what-you-wish accepted) from the Resources page at NYC Music Services.

The behind-the-scenes work on this project has been unbelievably wonderful, so I wanted to put the acknowledgments above the fold, so to speak.

To learn more about this project, and how it originated from several projects that got merged into one, see this earlier blog post from December 2018.

As the resident font professional on this project, Jeff Kellem of Slanted Hall Type Foundry has devoted countless hours to it. No detail was too small for him to overlook as the revisions numbered into the hundreds. He built the entire Pori suite and also built the Pori, Norfolk, and Norfolk chord symbol fonts. Although he will insist that this was a font engineering project and not a type design project per se, his skill is evident everywhere. Making these fonts work seamlessly in Sibelius was a special challenge, and I’m so glad that Jeff was up for the task and all of the twists and turns it took along the way.

Bernie Cossentino of Twin Page Music wondered one day why must it be so difficult to create angled slash chord types in Sibelius. Now, after going down the mother of all rabbit holes, he knows why. But that did not deter him from persisting with this vision and basically creating a whole additional Sibelius feature independently of official development. Now, with three angled slash chord (ASC) styles to choose from (Pori, a handwritten style; Norfolk, a serif style; Norfolk Sans, a sans-serif style) you can enjoy the fruits of his painstaking efforts.

Bob Zawalich and Robin Walker offered encouragement and feedback throughout the process, and also contributed an update to the Norfolk Harp font in this latest go-around.

On the Pori fonts we had a fine team of beta testers that found bugs and gave helpful suggestions. Thanks to all who tested!

It was fun, as always, working with Florian Kretlow to include support for his Figurato figured bass font in this latest Norfolk update.

Sam Butler and the Sibelius team made sure that these fonts would be supported in the latest versions of Sibelius, and you’ll find the Norfolk and Pori fonts hard-coded into the list of the music fonts, making it easier to start working with them right away.

And finally, Daniel Spreadbury and Anthony Hughes created the open-source Dorico fonts to begin with. While they surely did not design Bravura and Petaluma with Sibelius in mind, this whole project would not have even happened without them and their quest to make music look more beautiful.

The Pori suite of fonts is derived from Steinberg’s Petaluma font, which itself draws inspiration from the style of hand-copied music by Ernie Mansfield and Ann Krinitsky in Sher Publishing’s Real Book series, as seen here:

With the complete suite of Pori fonts and the Petaluma Script text font (bundled with Pori), this can now be fully recreated in Sibelius (with a little help from Palatino on the titles):

Those fonts that are not starred are replacements for their analogous Sibelius (Opus, etc.) font.

The ASC/ASL fonts are described more in this blog post, and below.

Read below for more on the Pori Rehearsal fonts.

Bundled with Pori is Petaluma Script, the text font designed by Daniel Spreadbury at Steinberg for Dorico. Since it’s a text font, it already works quite well in Sibelius and so there was no need to make a Pori derivative of it.

So Jeff created new fonts, Pori Rehearsal Overline and Pori Rehearsal Underline, respectively, to make it easy to use these in Sibelius — or indeed any program, meaning that Dorico and Finale users can benefit from these fonts as well.

Using these fonts in any program is easy; simply select either Pori Rehearsal Overline or Pori Rehearsal Underline. The enclosing brackets are applied with the square brackets [ and ]. Typing [Bossa] would result in the example pictured above.

The Pori house style for Sibelius (described below) includes special text styles that use these fonts: Musical structure, Technique overline, and Expression underline.

Taking it one step further, Jeff also created Pori Rehearsal Enclosed, combining the characteristics of the overline and underline sets to form a font that can be used with rehearsal marks and other text:

Building on some of the work already done in Petaluma Script, notice how the Pori Rehearsal fonts make room for diacritics and descenders:

Pori Rehearsal Enclosed can be used for rehearsal marks in Dorico and Finale as well as in Sibelius, as all three programs allow for a custom prefix and suffix — in this case the the square brackets [ and ].

The Pori suite is beautiful and you can use some or all of the fonts in the suite as you like.

If you are working with an existing document, depending on your settings, you might find that you will have to make certain adjustments, in the same way that you would if you import any other house style into an existing file.

The ASC chords are described in this earlier blog post, when Pori Chords ASC was first introduced. In short, they allow you to have chord symbols appear with an angled slash between the main chord symbol and an altered bass note, like this:

Hundreds of kerning pairs have been adjusted and many other refinements have been made.

Further, a mind-boggling number of special variations is supported through legacy input mode (Text > Styles > Chord symbol). Full documentation is included in the download, but here’s a summary:

Type the question mark ? instead of the slash / to get the chord to display without the angled slash (linearly). 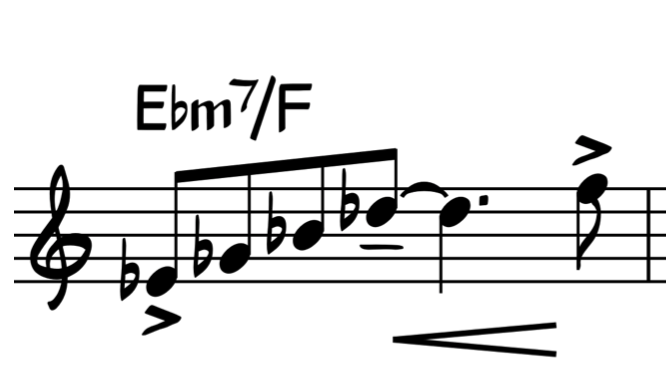 Type the pipe | instead of the slash / to use a slash with a flatter angle.

Type the grave or backtick ` after the bass note or accidental in the chord symbol to make it a small capital letter.

Type two graves or backticks `­­` after the bass note or accidental in the chord symbol to make it a lower case letter.

Pori Chords ASL is another font included with Pori. It is designed for use when you primarily want chord symbols with altered bass notes to display in linear fashion (the typical Sibelius display), but want to occasionally use an angled slash chord symbol in legacy mode. The only difference in ASL is that the functions of the question mark and slash are reversed from their functions in ASC. In ASL, type the question mark ? instead of the slash / to get the chord to display with the angled slash in legacy mode.

It is still the case that the ASC/ASL fonts will only work in Sibelius 2018.11 and later.

Further, the Chords ASC/ASL Std fonts display correctly on screen as well as when exporting to PDF via File > Export > PDF. However, printing the Sibelius file will cause chord symbols using these fonts to display incorrectly. Until this is hopefully resolved in a future update, the workaround is to first export a PDF document from Sibelius and then print from the PDF.

Regarding guitar frames: Angled slash chords won’t sit well over a guitar frame, but normal, non-slashed chords will. This means that the ASC font won’t work with guitar frames, but the ASL font generally will work, although certain positioning settings may need adjustment.

If all that weren’t enough, Bernie has gone ahead and created two more pairs of fonts with all of the same features as Pori Chords ASC/ASL.

The Pori, Norfolk, and Norfolk Sans Chords fonts, first released in December 2018, have all been updated to incorporate the kerning and other adjustments made in the ASC/ASL fonts. 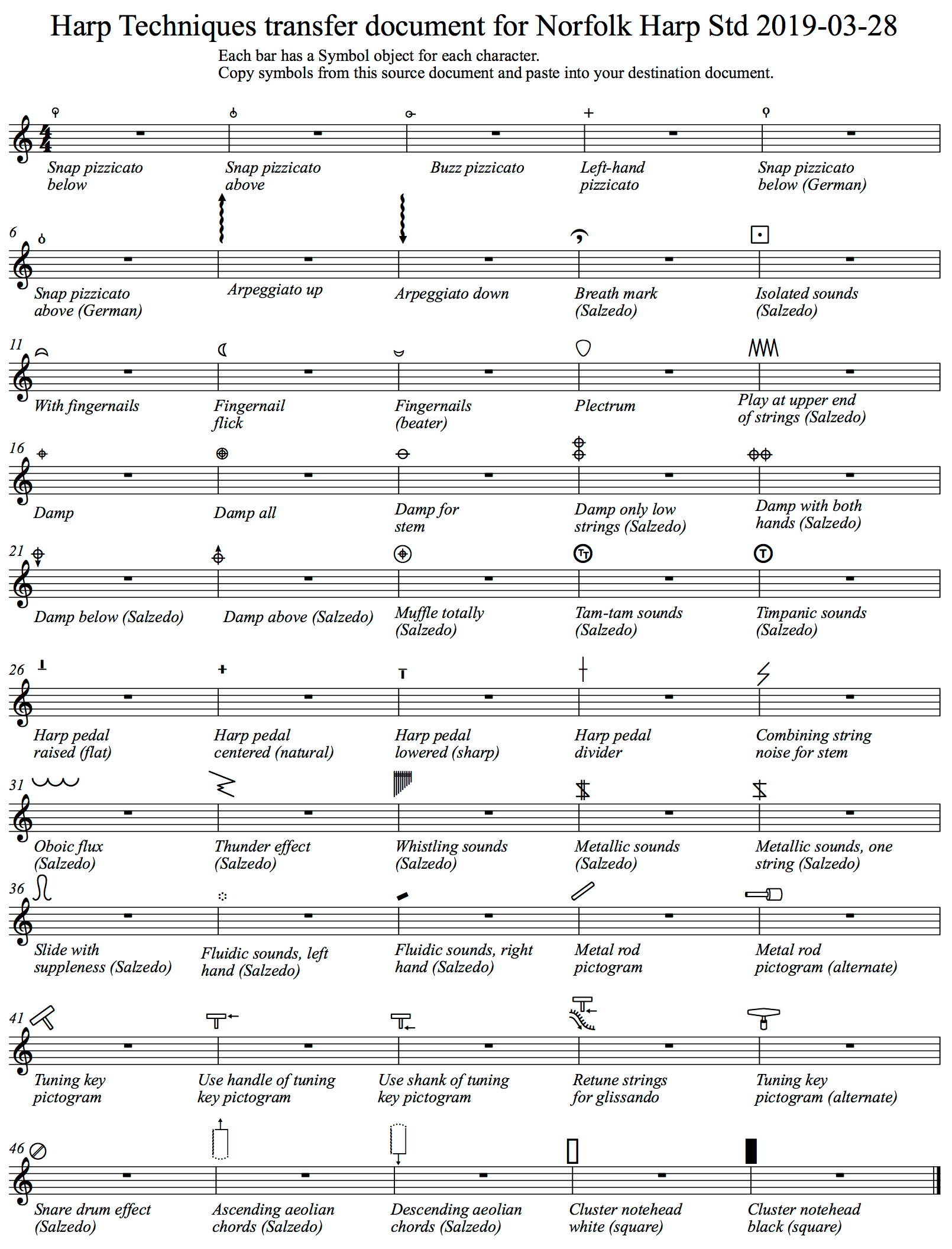 His original purpose was to create a way to input figured bass notation in Dorico, but the font works with any software, including Sibelius. So we’ve bundled it with the latest Norfolk update and included support for it in the latest house style.

Full instructions for using Figurato, including how to set it up for use in Sibelius if you don’t use the Norfolk house style, are available at the Figurato repository on GitHub. You do not need to download Figurato separately if you download the latest Norfolk update.

The Norfolk house style has been updated with support for the latest Norfolk Harp update and to use Figurato as the figured bass font in place of Sibelius’s default Opus Figured Bass font.

Today’s house style update also includes the improvements made in December 2018, which included support for the Academico text font and Norfolk Chords.

As mentioned up top, you can download the fonts now along with the associated house styles and documentation from the Resources page at NYC Music Services. Pori and Norfolk are offered as separate downloads.

Under the terms of the SIL Open Font License, we’re making these fonts available for free, and happily so. However, as you can probably tell, the work gone into producing these fonts has been enormous — easily in the hundreds of hours, if not more. To everyone that’s donated or named their own price for the fonts already, we truly appreciate your support, which allows development like this to continue.

If you value these fonts and use them in your work, please consider donating or paying what you wish for them. It’s easy to do so on the site at the same time when you download the fonts. Thank you!

Because of the way fonts in Sibelius are structured, third-party fonts designed specifically for Sibelius are rare, and quality ones like these rarer still. Other than the default Sibelius fonts, I believe Norfolk and Pori are the most fully-featured Sibelius fonts available anywhere — and they look terrific. Everyone mentioned at the beginning of this post played a vital role in their development.

Whether you’re a Sibelius user seeking to beautify your scores, or you’re a multi-platform engraver aiming to maintain a consistent style between Sibelius and Dorico, or you don’t even use Sibelius but can make use of the new Pori Rehearsal fonts in your software of choice — I hope you enjoy today’s release. Let us know how you like it!

The Norfolk and Pori angled slash chord (ASC) fonts for Sibelius have been updated so that they are as easy...