In August, MakeMusic announced that it would be releasing a paid upgrade to Finale, known as Finale version 26, “sometime in the next few months,” although no specific timetable or features were revealed at that time.

While the exact date of availability is still unknown, MakeMusic has been previewing some new features at its official Finale blog. So far, the features all indicate better default articulation positioning, something that many users have requested for a long time, bringing relative parity in this area with the other major desktop notation programs.

Articulations in Finale v. 26 will automatically stack on top of each other if more than one is present. The order of the stacking articulations relative to the note will be determined by the Articulation Selection dialog. One related benefit of this new behavior is that it should no longer be necessary to use the composite articulations like the accent + staccato, since you will be able to apply each articulation separately. This will allow for better positioning on notes where you’d want the staccato note to appear inside the staff, but the accent to appear outside the staff.

In Finale v. 26, tremolo articulations will cause stem lengths to be automatically lengthened, and they will be correctly centered, whether or not the note is a whole note or a note with a stem — something that currently requires Jari Williamsson’s JW Yada Yada Tremolo plug-in to achieve.

Articulations can also optionally center on the stem if they appear on that side of the note:

This is accomplished by a new On Stem option in the Positioning area of the Articulation Designer, which also sports new Center over/under stem when stem side and Stack automatically options, as well as new Slur interaction, Distance from entry, and On-stem distance from stem end/flag/beam options, the latter of which controls the position of the tremolo articulations, as shown in a YouTube video previewing the feature. 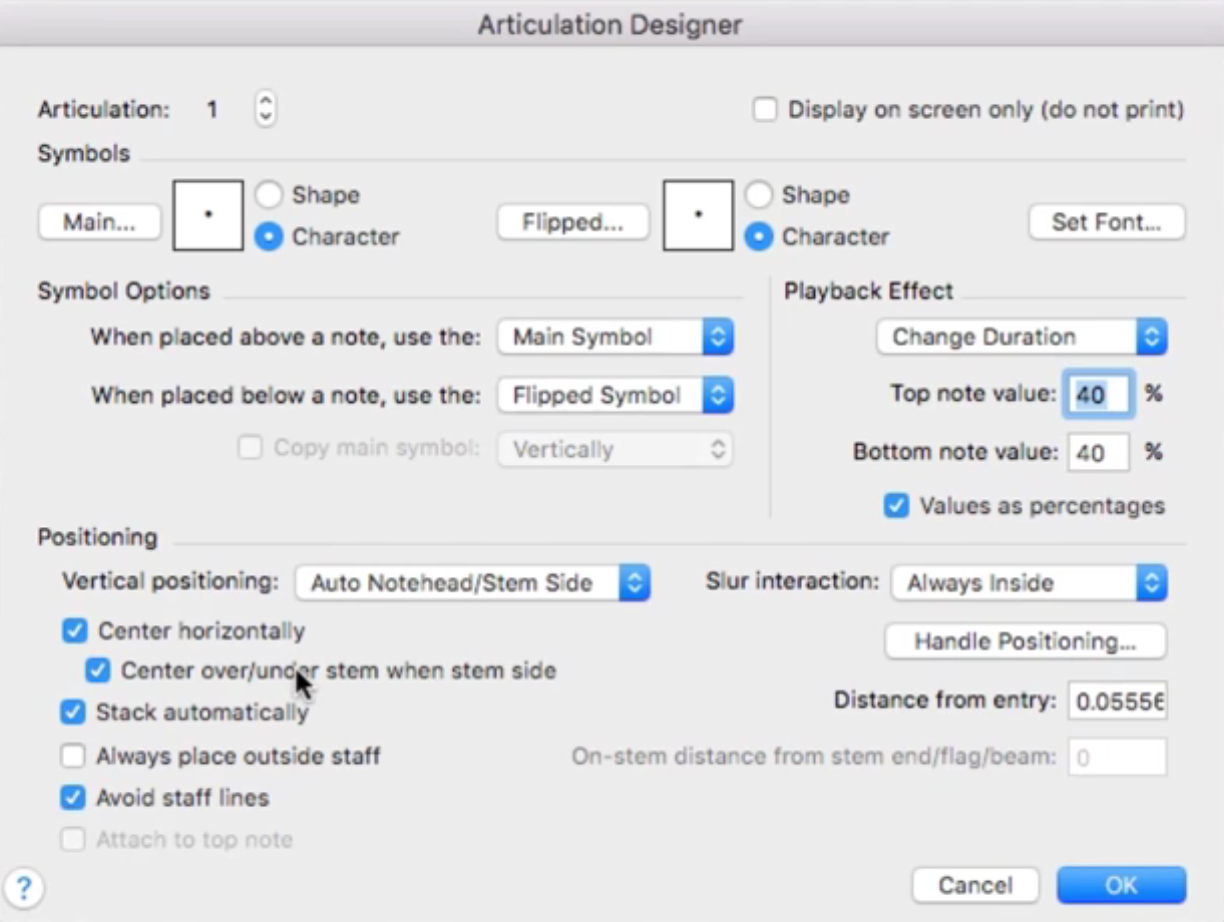 Users of other programs may be puzzled and wonder why such behaviors aren’t already present in Finale. That would be a fair observation, but it’s also important to keep in mind that Finale is the oldest major desktop notation software product still in widespread use, and some of these features have required development in a way that also maintains compatibility with files created in earlier versions going back nearly 30 years.

MakeMusic has released Finale version 26.1, the first significant update since Finale v26 was released in October 2018. Articulations get...

Take maximum advantage of the new articulation features in Finale v26 with this script that automatically splits precomposed articulations (such...