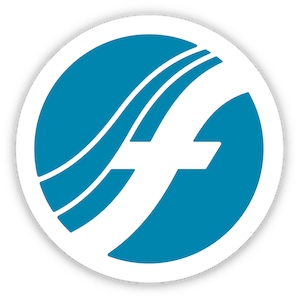 Today MakeMusic released the third update to version 25 of Finale (25.3). This is a free update for all registered users of Finale v.25. Users can update directly through the software or through their MakeMusic account.

While there are a few new features and bug fixes, the focus of this release was Finale’s underlying code, including Unicode improvements. In a post on the official Finale blog, Michael Johnson, MakeMusic’s vice president of professional notation, said: “We continue to make significant investments under-the-hood, improving Finale infrastructure (or code base) to set the stage for additional improvements in the future. While much of this work may not produce measurable improvements in the way Finale works today, to not mention them would seriously under-represent the work we’re doing on the behalf of Finale users.”

In addition, Mark Adler, MakeMusic’s notation product manager and senior editor, told me: “On the Windows side, I’d especially like to point out the authorization fix for Windows 10 users. This has been an annoying bug that has affected a number of our Windows users.”

Separately, earlier this month Jari Williamsson released long-awaited 64-bit versions of many of his popular freeware Finale plug-ins, for both Mac and PC, making it possible to use these plug-ins in Finale 25 for the first time.

The aperture width for short and long hairpins can be set independently, thanks to new options in the Tools > Smart Shape > Smart Shape Options dialog: 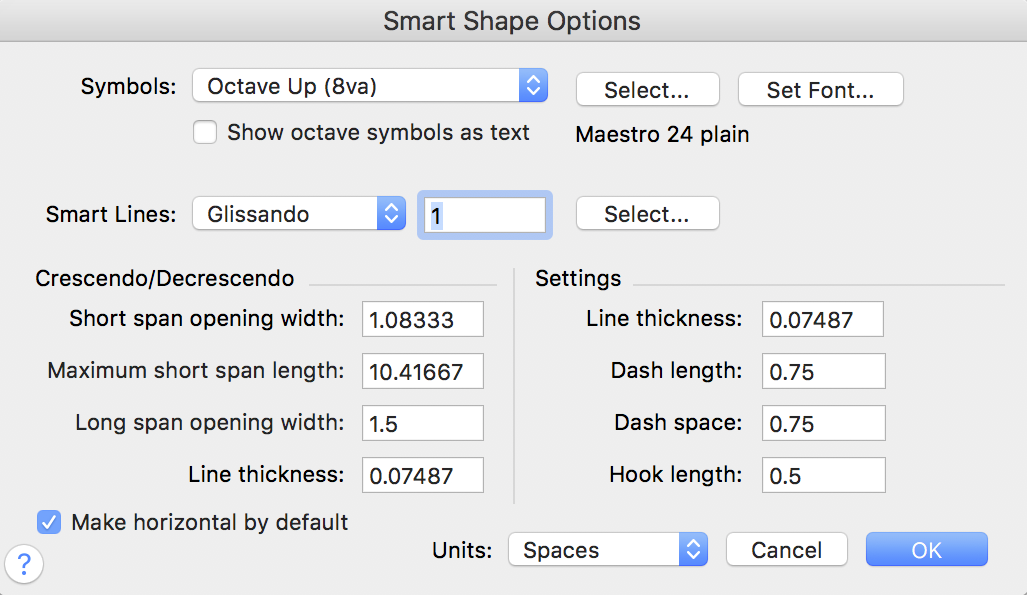 Here’s an example that demonstrates these settings:

The apertures “of complementary hairpins should match in width,” according Elaine Gould’s music engraving reference Behind Bars and general good judgment, so the example above is more for demonstration purposes than an example of good notation practice.

Of course, you can still manually adjust the apertures of hairpins on an individual basis, just as you could before, but this will make it a little easier to get the desired results automatically. If you save a .musx file in Finale 25.3 and open it with an earlier version, the Long span opening width setting is the one that’s retained in the file.

Building upon the feature first introduced in Finale 25.2 which made it possible to import a MusicXML file directly into an open document, Finale 25.3 now allows you to Restrict MusicXML formatting if that box is checked in File > Import > MusicXML Preferences and Use current document if empty is selected.

This discards some formatting information upon importing a MusicXML file, such as page size, forced system breaks and the distance between systems, so that you can more quickly get to the business of formatting the music to your own specifications.

Finale 2014 introduced the very useful ability to have a “keyless” key signature (also known as an open key or atonal key). But there was one problem: In a transposing score (Document > Display in Concert Pitch turned off), Finale didn’t cancel the key signatures on transposing instruments when going from a key to a keyless area, unless Cancel Outgoing Key Signature is checked in Document Options > Key Signatures.

This meant that if your preference was the more accepted modern convention of not canceling the outgoing key signature, you could encounter a situation like this: 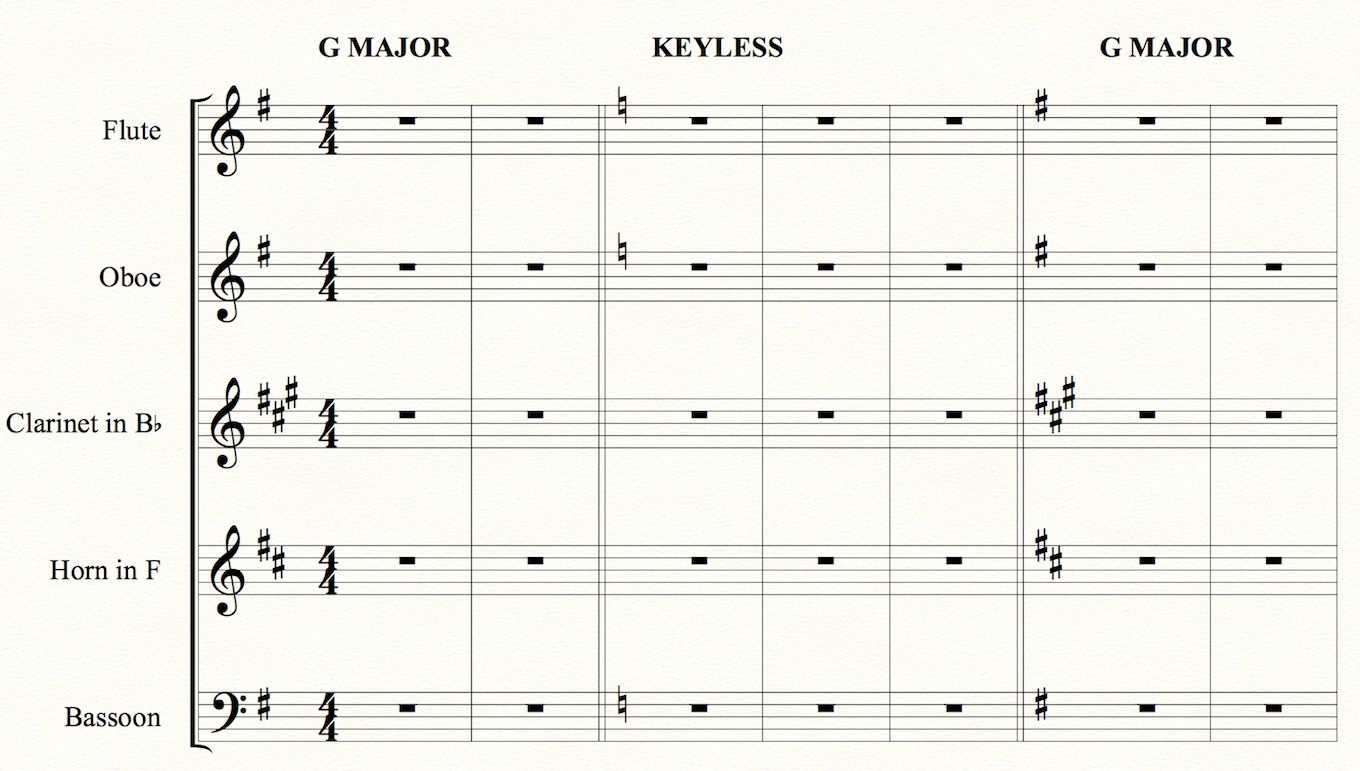 Notice how the clarinet and horn don’t display a change of key — potentially resulting in confused players and a lot of wrong notes.

Thankfully, this has been corrected in Finale 25.3: 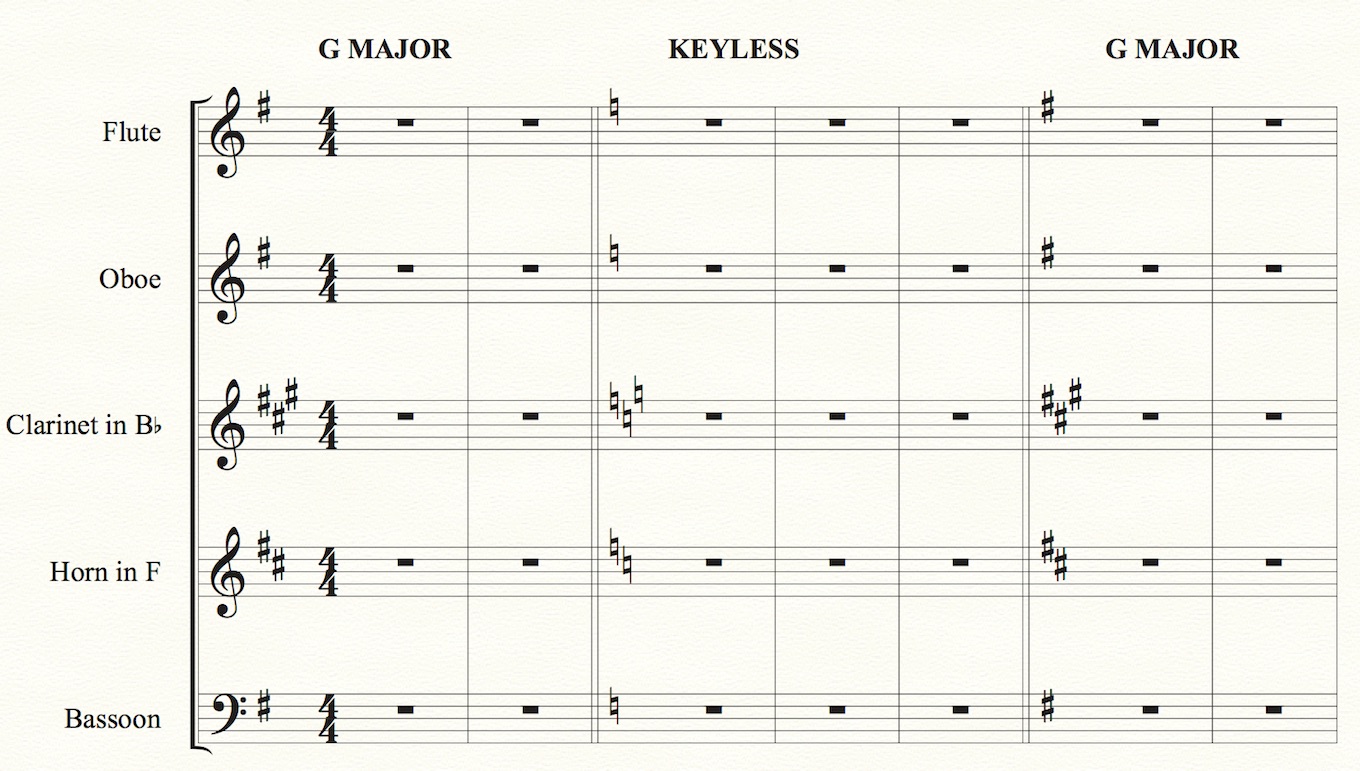 Other new features and fixes

MakeMusic has released the first update to version 25 of Finale, officially known as v.25.1. This maintenance update mostly fixes...