Finale 2014d and beyond: a discussion with MakeMusic - Scoring Notes
Skip to content

Today MakeMusic released Finale 2014d, the fourth maintenance release to the current version of the company’s flagship product. The release is notable because it’s the first Finale maintenance update since MakeMusic became a part of Peaksware in August of this year, under the leadership of new CEO Gear Fisher.

The update has a number of bug fixes and feature restorations made in response to user requests, including:

MakeMusic also announced that it will be discontinuing support for Finale 2011 at the end of this year.

Most interestingly, though, the release already bears the influence of the new leadership’s approach to software development by including an anonymous data collection component. The Help Improve Finale feature, which MakeMusic assures users will not collect any personally identifiable information and will not have visibility into actual documents, can be easily switched off at any time. It is designed to help the company “identify usage patterns so that [its] designers can make informed decisions when creating future versions of Finale. 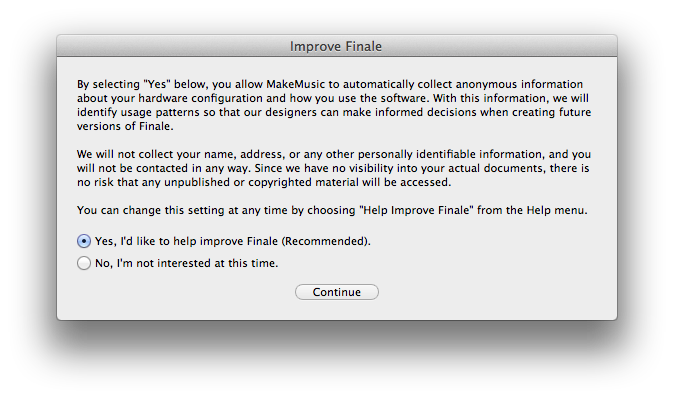 In a post today on the official Finale blog, Gear provided details about software development, the upcoming move to Boulder (about 30 people from the existing Minnesota-based team will make the move), and announced the new MakeMusic leadership team.

I had breakfast a few weeks ago here in New York with Gear and two members of that team: MakeMusic product vice president Fred Flowerday and notation product manager Mark Adler. The trio was in the midst of a trip to Boston and New York during which they met with representatives from schools, publishers, and other customers. We talked about the future of Finale and the state of the music notation field, so read on for more about our discussion.

Gear said to me, “I want to change the way MakeMusic is perceived in the industry.” When I pressed him further about what he meant, he explained that he wants to be “more transparent about what we’re doing, how products are developed and what we can do to improve the user experience,” and he used the new data collection part of Finale 2014d as an example.

“Of course we get lots of user feedback already, but it’s all anecdotal,” Gear said. “In order to make meaningful improvements in the software, we need for that feedback to be objective. We’ll actually be able to tell which aspects of the program people are using, and how often.”

He explained the utility of collecting and analyzing the data. “There might be lots of cool features that no one knows about that are buried several levels deep in the program. If we see that users are trying to perform a task a certain way, but there’s a feature that could save them time, we might be able to increase the visibility of that feature in some way so that it’s more prominent.”

Mark also pointed out that “it will be helpful for us to look at the plug-ins: which ones are being used often, which ones have some problems that need to be fixed, and which ones have been hanging around for a long time that could be deprecated.”

“With every Finale release,” Mark said, “there’s a rumor that we’re killing off Speedy Entry. It’s just not true!” Speedy Entry, of course, is the “pitch, then duration method” of note input popular among long-time Finale users and a feature that was newly included with Sibelius 7. He then asked me which version of entry I used, Speedy or Simple Entry. I replied that I probably use Speedy Entry about 80% of the time and Simple Entry the remainder of the time, mostly for repitching, but I wasn’t quite sure if that was accurate.

“Wouldn’t it be great to know?” Gear asked, illustrating the potential of having the data available to scrutinize. “Look,” he said, “this is not about being lazy and asking users to do the work for us. There just isn’t a way to objectively know how people are using our product unless we directly collect the information about which tools they click on and which tasks they do.”

Gear explained that different features have different purposes, and it’s not just the quantity of use that matters. A feature that has widespread but rare use is just as important as one that maybe only 20% of people use often. “Think of something like the e-mail auto-responder in Outlook,” he said. “That’s something you might only use a couple of times a year when you’re away on vacation. But nearly everyone uses it.”

Fred said that they realize that they won’t be able to learn everything about product development from this data, and that they’ll have to interpret the data wisely. “It’s entirely possible that something isn’t being used, not because people don’t want the feature, but because it’s poorly implemented.”

I cautioned against relying solely on user feedback to drive improvements. I mentioned Sibelius 6’s introduction of ReWire as an example of a feature I didn’t even know existed, yet now find indispensable when working with orchestrations and transcriptions. Gear agreed, citing the quotation apocryphally attributed to Henry Ford: “If I had asked people what they wanted, they would have said faster horses.”

However, Gear said, simply “putting out new features and waiting to what feedback comes in is an inefficient way of developing software, and that’s what I mean about being more transparent to our users and improving the company’s perception in the market. When you get updates for apps on your phone, or for modern web browsers like Chrome and Firefox, they’re frequent and you don’t even think about it. You just download the update without being fraught with apprehension about what or wasn’t included; you might take a look at the ‘What’s New’ document and then get on with your work. That’s where I’d eventually like to get to with MakeMusic’s products. What we won’t do is be beholden to a yearly ‘major’ release cycle like we used to do.”

Fred & Mark are accomplished engravers and musicians themselves, and they were quick to point out that the development teams are now being headed by people that actually use the software for their work in that capacity. Fred asked me in which version I do most of my Finale work. When I replied that it was Finale 2012, not Finale 2014, it did not come as a surprise. “We fully know that there are many things that need improvement,” he said.

We all had high praise for the work that Finale user Jari Williamsson is doing with his freeware plug-ins, and Fred acknowledged that some of those features “should, frankly, be things that Finale can do on its own.” Moving with the company to Colorado is, Fred said, “a tremendous opportunity for us to refocus our efforts on things that should have been done for quite some time.” Gear said that the transition is on track to be completed some time in the first quarter of 2015.

We discussed MakeMusic’s interactive music software SmartMusic, which shares Finale’s notation engine. “I’d love to get SmartMusic to a point where it’s not just a music education tool, but it’s a music publishing platform as well,” Gear said. “For that to happen, there needs to be a critical mass of music available so that students and other consumers can find anything they’re looking for, and it encourages a virtuous cycle where publishers want to make more music available on SmartMusic.”

MusicXML continues to be important to MakeMusic as a means to allow people to more easily transfer music among different notation products, but whether or not MusicXML remains a part of the company in the long-term was less relevant. “Because the music notation software market is divided,” Gear said, “sharing files between users across different platforms and versions is difficult,” and from this the need for MusicXML arose. He also said that the continued development of MusicXML may ultimately fall to the standards community like World Wide Web Consortium (W3C) or the MIDI Manufacturers Association (MMA).

About another company-owned open standard, Steinberg’s relatively new Standard Music Font Layout, or SMuFL, Mark said that MakeMusic plans to support it in a future version of Finale. “I’m well on my way to mapping Maestro to SMuFL, and the Engraver font will be next,” hopefully followed by other fonts as well, Mark told me. “We’ll continue to support the legacy fonts, but in our early testing, SMuFL in Finale is working well.” He also pointed out that Bravura, the flagship SMuFL font, shares its provenance with Finale’s Maestro, as both are digital versions of Not-a-set.

Regarding Steinberg’s eventual entry into the market, Mark and Fred paid them professional respect, saying that their development team is very talented. Gear agreed, and added “I would love to be able to start from where they are, with no technical debt.” But, he added, “the music notation market is not expanding. With Finale and Sibelius well-established, they have a challenge ahead of them. I do think, though, that the more people there are in our field working and thinking about these issues, the better it is for everyone, especially consumers.”

The trio acknowledged the limitations of a small company in that niche market in supporting many legacy versions of its products. “We don’t have the resources of Adobe or Apple,” Gear said. “I’m focused on making Finale 2014 better, and if that means a 2014e or 2014f, that’s what we’ll do.” He clearly stated that there would not be any more updates for Finale 2012 or earlier.

However, Fred pointed out that that they fully understand that many people rely on music notation software for their livelihood or education. “It has to be as good as we can possibly make it. We were in a recording studio recently and we actually did a calculation of how much money per minute was being spent on the session — on the order of hundreds of dollars per minute. The music has to be right so that the money isn’t being wasted fixing wrong notes!”

MakeMusic has released Finale version 26.2. This maintenance release is squarely focused on bug fixes and other improvements rather than...

Finale 2014.5 is released with a slew of bug fixes, interface changes, a few new features — and, some promised...