Note: This post was originally published on September 27, 2016. Since then, we’ve received additional details from Faber regarding the e-book’s publication. Additionally, since the time of the original post, the e-book has become available on the Kindle e-reader app for iPad and iPhone, and so this post has been updated accordingly on October 9, 2016.

With little fanfare, Faber has recently made Elaine Gould’s music notation reference Behind Bars: The Definitive Guide to Music Notation available for the first time in electronic format, for Amazon’s Kindle and Kindle-compatible devices and Apple’s iBooks app on Macs and iOS devices. The e-book was released on last month on August 19, 2016; the hardcover edition has been in print since January 20, 2011. 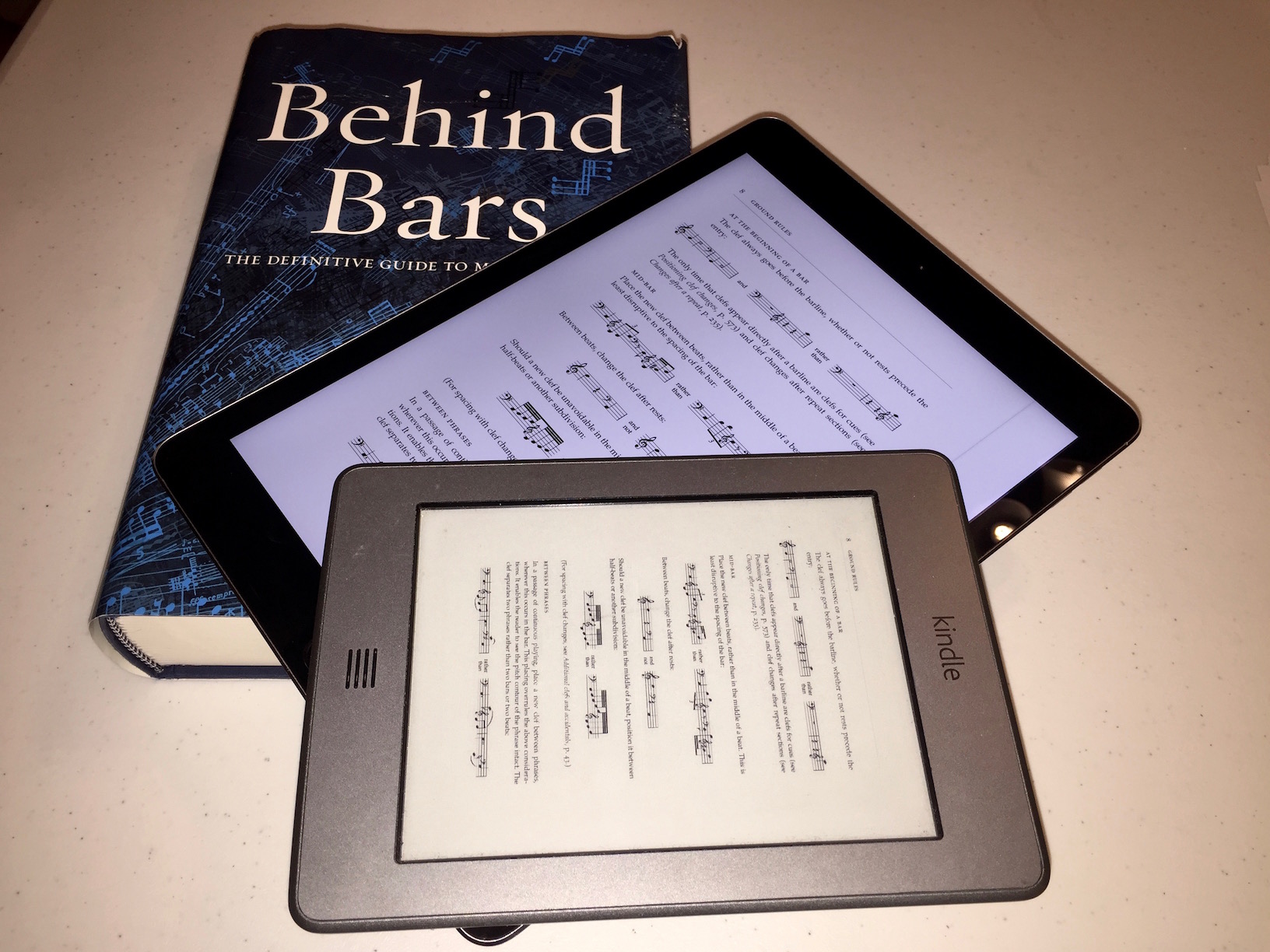 Priced at $36 in Amazon’s US store or £24 in Amazon’s UK store, with similar pricing for the iBooks platform in Apple’s US and Apple’s UK stores, the 694-page tome is faithfully reproduced from the original printed edition with the same layout, pagination and illustrative musical examples. As a result, some of the more sophisticated features available in other e-books, such as flexible font type and size, are not available in the e-version of Behind Bars. The result is akin to reading a static PDF on your device.

About this, Faber’s digital manager Catherine Walker told me:

Our initial wish was to convert the book into a reflowable format so that we could achieve the usual sophisticated features that are becoming the standard expectation of e-book readers. However, after literally months of trying to get it right, we continued to encounter numerous problems with layout formatting and image rendering due to the size of the file and the number of images contained within it. So, in the end we went for a fixed-layout format. While it omits certain features, the quality of the overall product was much greater than what we’d been able to achieve previously and more fitting with caliber we think readers of Behind Bars would expect.

At about one-third the weight (the hardcover weighs more than three pounds compared to a one-pound iPad), the pre-eminent resource for music notation can now go with you wherever your device goes, and it’s become more affordable to boot — it’s about one-third of the list price of the hardcover edition.

Although the Kindle version of Behind Bars was originally not supported on the Kindle app for iPad and iPhone, this has since been corrected, and so iPad and iPhone users wishing to read the book on those devices have the option to purchase it either through Amazon or through iBooks, depending on their preferred reading app. The book is also supported on Amazon’s Kindle e-readers and Fire tablets, the Kindle app for Android, Mac, and Windows PC, as well as Amazon’s Kindle Cloud Reader.

Using the CircularFLO software has allowed us to publish a fully searchable ebook to Amazon and Apple which has faithfully reproduced the complex musical notations directly from the print PDFs that are critical to this book (Behind Bars – the definitive guide to music notation by Elaine Gould). The ebook files look fantastic and we’re really pleased with it – the author is delighted!

The pages themselves are bitmapped as opposed to being vectorized. It’s not noticeable at an ordinary reading size, but if you zoom in very close you may notice slight pixelation and anti-aliasing of the text and images.

One deficiency of the e-book edition is that the headings and locators in the book’s meticulous index aren’t hyperlinked to the corresponding page(s) where the material can be referenced. This is an unfortunate omission, although at least chapter headings are hyperlinked. On the other hand, the book is searchable, perhaps obviating the necessity of the index; bear in mind that searches for the most common terms will require a bit of patience to sort through the results.

Indeed, when asked about this, Faber’s Catherine Walker said:

Given the chapter headers are hyperlinked and the quality of the search facility in both the Kindle and iBook versions is excellent, it was decided that links from the index itself were not necessary. However, if user feedback indicates this would be a useful feature we are willing to consider embedding links in future editions.

When Behind Bars was published five years ago, it quickly became the modern standard reference for music notation. and I ordered my copy right away. While it’s been worth every penny, I immediately yearned for a digital edition that I could take with me everywhere, both for quick reference and for the pleasure of more leisurely learning when stuck on a train or at an airport.

That wish has finally been granted. Despite the peculiarities with the digital transfer mentioned above, I’m thrilled that Faber has made this valuable content more accessible, and it now occupies prime space on my bookshelves — virtual ones included.

Kawai has released the English-language version of Touch Notation, a modestly priced and remarkably full-featured music handwriting and gesture-based app...