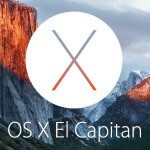 We’ve been keeping this page updated with what we know about the three most popular notation software products (Sibelius, Finale, and MuseScore) regarding compatibility with El Capitan (Mac OS X 10.11) since its official release on Wednesday, September 30.

Please share your experience using any of these products in the comments section, and we’ll continue to update this post as warranted.

There are reported bugs of Sibelius v8 crashing on El Capitan.  This problem was addressed in the Mac El Capitan update 10.11.2, and has no longer been reported as a problem.

Although Sibelius 7 and 7.5 are not fully supported on OS El Capitan, with limited testing, we have found these versions of Sibelius can run on El Capitan with minor issues:

If you receive an error message about not being able to open from the installer as it’s from an unidentified developer, please see this article.

If you are running on 10.10 or 10.11 and are having issues with the software automatically quitting when you try and activate, please see this article.

Regarding other Finale family products:

The knowledge base article on this issue can be found on the MakeMusic’s support site, and you can subscribe to it for updates.

From Thomas Bonte, MuseScore CEO: “There are no open issues we are aware of with regards to MuseScore 2.0.2 and El Capitan.”

Thomas also noted that “the MuseScore mobile app also runs on iOS 9,” the newest version of Apple’s mobile OS, which was released two weeks ago.