Dorico is here: A review - Page 5 of 6 - Scoring Notes
Skip to content

It does automatically what you would have done anyway

One of the statements that has come up repeatedly from Dorico’s developers over the last four years is that it will “do automatically what an experienced copyist or engraver would have done anyway”.

Does the program deliver? It sure does. But you don’t have to just take my word for it. Instead, you can take another look at the PDF files that I presented in this review’s previous section.

I prepared those scores to demonstrate Dorico’s innovative features allowing for notations that have been extraordinarily difficult to achieve with current scoring programs. However, the more astonishing thing about them is that I virtually did no fine-tuning to their standard notation. To be more precise: I did not even feel the need to fine-tune anything. That does not mean that nothing in the scores could be improved. But it is also quite hard to find anything that positively has to be further polished.

We only have to revisit the first system from Bernstein’s Mass, though, to find a number of things which would potentially need to be adjusted in Sibelius (and often also monitored later, to make sure nothing has reverted).

Taking my usual workflow as a reference:

Most of the time, Sibelius places them at an adequate position, but that is merely due to its default offset for Tempo text matching the most common scenario; thus I tend to check every tempo indication anyway. Incidentally, the source score does not follow the standard rule in the first place. Dorico does.

Dorico completely automates this; see below.

The source score is spaced wide enough for this to not be an immediate issue. However, for a rehearsal score of just the first pre-recorded piece, or a part for the soprano, it becomes problematic. Sibelius users might recognize this as the case where a very short hairpin suddenly vanishes behind a neighboring expression text object.

This is how Dorico handles it:

In Dorico, a fermata applied to the relevant position in a single voice will automatically have corresponding fermatas added at appropriate positions on all other staves, including those with bar rests.

In Dorico, breath marks are not just independent symbols attached to the stave, but properties of the note preceding the mark.

We can also observe a bonus automation here, due to a bug of the current Dorico build: While the dotted barline should not cause the following A flat in the singer’s line to show a cautionary accidental (consider this a bug report), it is great to see how the slur is allowed to cut through the flat’s line, allowing for a closer slur path. I dare not to estimate the number of times I have manually adjusted this in Sibelius.

These are seven issues which, in Sibelius, make me work just to achieve the obviously necessary, for three bars of material that is not even particularly challenging, engraving-wise.

In Dorico, one merely enters the music. Its deep semantic model at last introduces to music notation a paradigm well-established in other fields: the program asks users for the results they want and not just what edits should be done.

The key to this approach lies in two places: global options, and the Properties panel at the bottom of the screen in Write mode and Engrave mode. Let’s look at Properties further, to see what’s possible.

In Write mode, and especially Engrave mode, the context-sensitive Properties are accessed by clicking on the chevron at the bottom of Dorico’s display (shortcut: Command-8 on Mac or Ctrl+8 on PC).

As an example, let’s take a look at how properties can affect tempo text.

In other programs, tempo indications are basically text objects, even though there might be some additional functionality attached. Dorico’s understanding of tempo indications is much more sophisticated. For starters, they are divided into four categories:

Let’s assume we created an absolute tempo change by invoking the Tempo popover (Shift-T) and typing in “Allegretto”. Here are the properties available:

In addition to the actual tempo text, there is the option to provide an abbreviated version, useful in parts where horizontal space might be limited. A second property decides whether the abbreviation should actually be used; in our use case, this would be checked in a particularly crowded part, but not in the score or in parts with plenty of room. Tempo can also be specified as a bpm (beats per minute) value, along with the note value constituting a beat. Dorico understands the concept of a tempo range, which can be set by adding a second bpm value (last entry to the right in the panel).

It is important to understand that all this information (full tempo text, abbreviation parameters and metronomic values) says nothing yet about the tempo indication’s actual appearance; that’s controlled by the properties in the panel’s middle column. Text and metronome mark can be shown independently from each other: just “Allegretto” or just a metronome number or both together. Unchecking the first two boxes makes for a fully functional, yet invisible tempo change. The metronome mark itself can be controlled further to be parenthesized and to be understood as approximate. If the latter option is chosen, there are five choices available for how to display this. If you ever have spent time carefully checking if all metronome marks in a larger work are written consistently then you will know how convenient this is.

However, using the Properties panel is not even the proper way in Dorico to get a consistent score appearance. All defaults for Properties can be customized in Engrave mode > Engraving Options to match what is needed for a specific project, while Write > Notation Options can be customized on a flow-by-flow basis.

Daniel has said that the beautifully illustrated options in these dialogs were inspired by the music examples in Elaine Gould’s music notation reference Behind Bars. 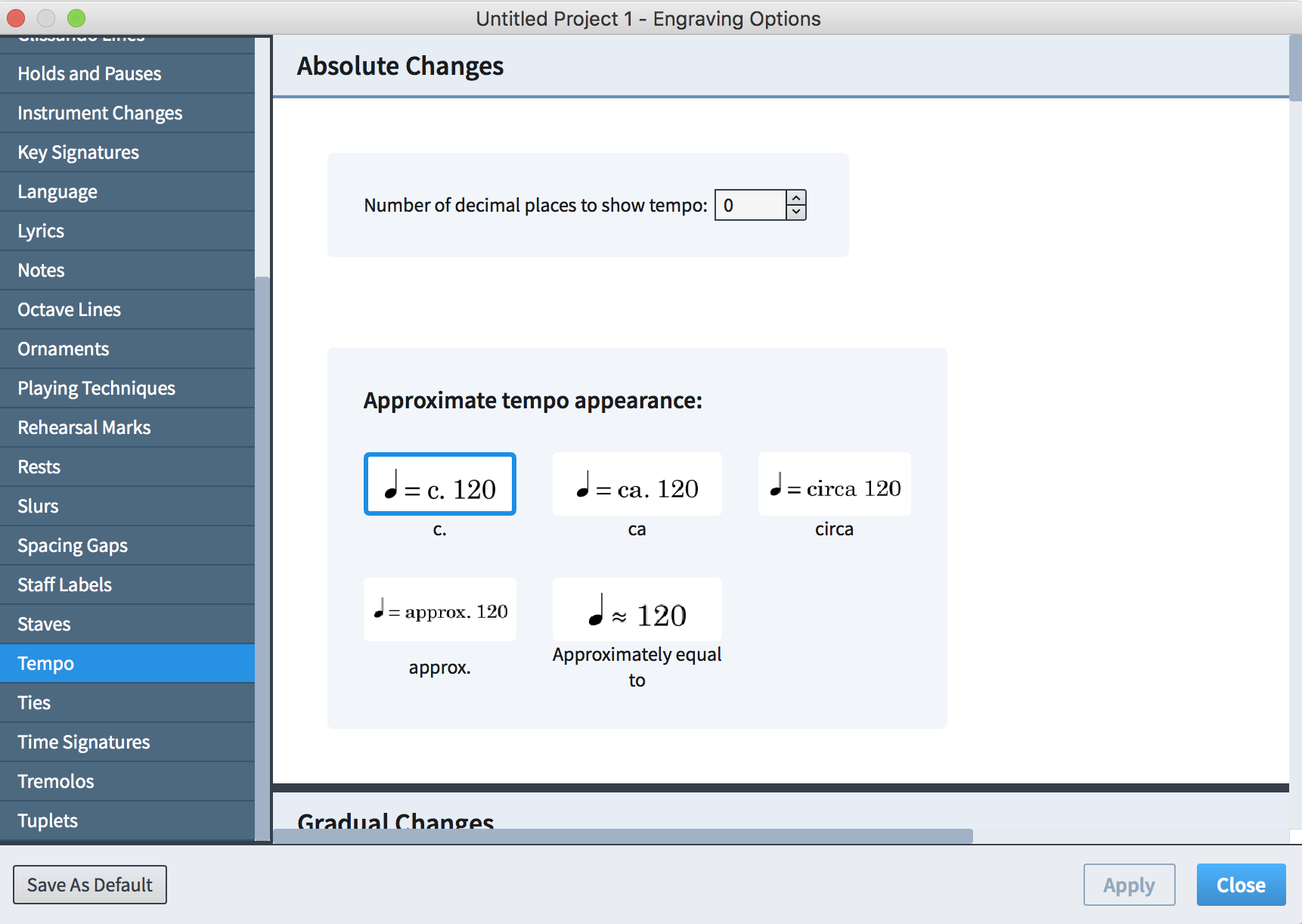 A greyed-out property means that the default setting is being used. Only if there is a specific reason to deviate from the default — like with the abbreviation of a tempo indication — a Properties override is called for. With carefully set global options, there is a good chance that for many scores the Properties panel will rarely be needed by many users, especially for music that that tends to function in well-defined stylistic constraints, like big band charts, wind band music or pop music transcriptions.

Earlier, I discussed Dorico’s ability to have any number of voices on a single stave. I did not address, however, if those voices are then handled competently. It is no small thing to ask for; voice positioning rules are obscure and tedious.

To stress test this area, I notated two passages from Bach’s Musical Offering. These excerpts from the Ricercare a 6 have the distinction of containing one of the few instances in the literature with four independent voices written simultaneously on one stave. For comparison we prepared the same music in Finale and Sibelius.

We used the same ground rules for all competitors: consistent voices had to be used to match the counterpoint (no switching to other voices in between, cross-staves notation when necessary). The only edit allowed to improve the default output was to swap stem directions.

I can honestly say that this blew me away. Take a moment and study this in detail. Compare what Dorico is doing and its competitors are not. Try to imagine what the algorithms behind this default (!) output must look like. It truly is mind-boggling.

That’s not to say that everything is perfect, though. Again, keep in mind that such dense counterpoint on single staves is a challenge in any case. (Then remember the Sibelius and Finale versions you just saw.)

So how to improve this? With experience from other programs, your impulse might be to now painstakingly shift things around by editing offset values. And maybe you are thinking Dorico’s Engrave mode will give you graphical freedom as Finale does, or even the fabled SCORE.

Well, there’s bad news and there’s news making the bad news largely irrelevant. It turns out that, at least currently, Engrave mode lets you move around items far less then many people might have been expecting. Most importantly for our voice positioning problems, there is no way of freely moving notes around horizontally. That’s quite a bummer — if you insist on doing things the way you are used to.

But Dorico actually offers you a much better way, and it does again involve Properties and telling the program what you want instead of what it should do.

Let’s take one of the Bach examples and apply this step by step. Here is the default output:

As a first manual edit, I improve two ties by changing their direction (this still feels rather familiar, with maybe the exception that tie ends will be also moved horizontally more often than in other programs, to adapt them to new context):

Next, in Properties, I swap the Voice column indices of some notes. I could do that manually, but Dorico conveniently provides a command for this, again offering to provide a result instead of just a tool. The Voice column index is a number determining the priority which a note, rest, or chord will have in the left-to-right arranging order where several voices claim to place something at the same position. Activating the Voice column index property for a note allows me to override the index.

I have colored the swapped pairs:

Lastly, we have to adjust stem lengths (colored notes) and rests. (Placing of the latter, I have to admit, is a bit crude in comparison to what Dorico does with notes; one reason might be that the Voice column index can not be applied to them.) Only now is the point to resort to offset overrides. While this feels more like working with old tools again, it is noteworthy that, again, each edit is evaluated in turn to automatically improve the whole section based on the new context:

Steinberg has released Dorico 3.5.12. Although the odometer has barely budged, this update is significant for its official support for...

The latest version of the Dorico guide is now available to download as a PDF, encompassing improvements to the software...