Steinberg has released Dorico 4.2, the latest in a series of updates that have incrementally re-built the program’s powerful Key Editor, the piano roll-like interface that allows the user to manipulate the score data in a manner resembling that of a sequencer. The 4.2 update aims to makes it much easier to edit the music on drum sets and other percussion kits.

Dorico 4.2 also changes the way the Key Editor (for all instruments, not just percussion) works in linked mode. Linked mode will now simply follow the selection that is made in the music area in Write mode, and Steinberg’s goal is for Dorico to do this “as non-intrusively as possible”.

As ever, the version history documentation for this release thoroughly documents the improvements as well as the bug fixes. 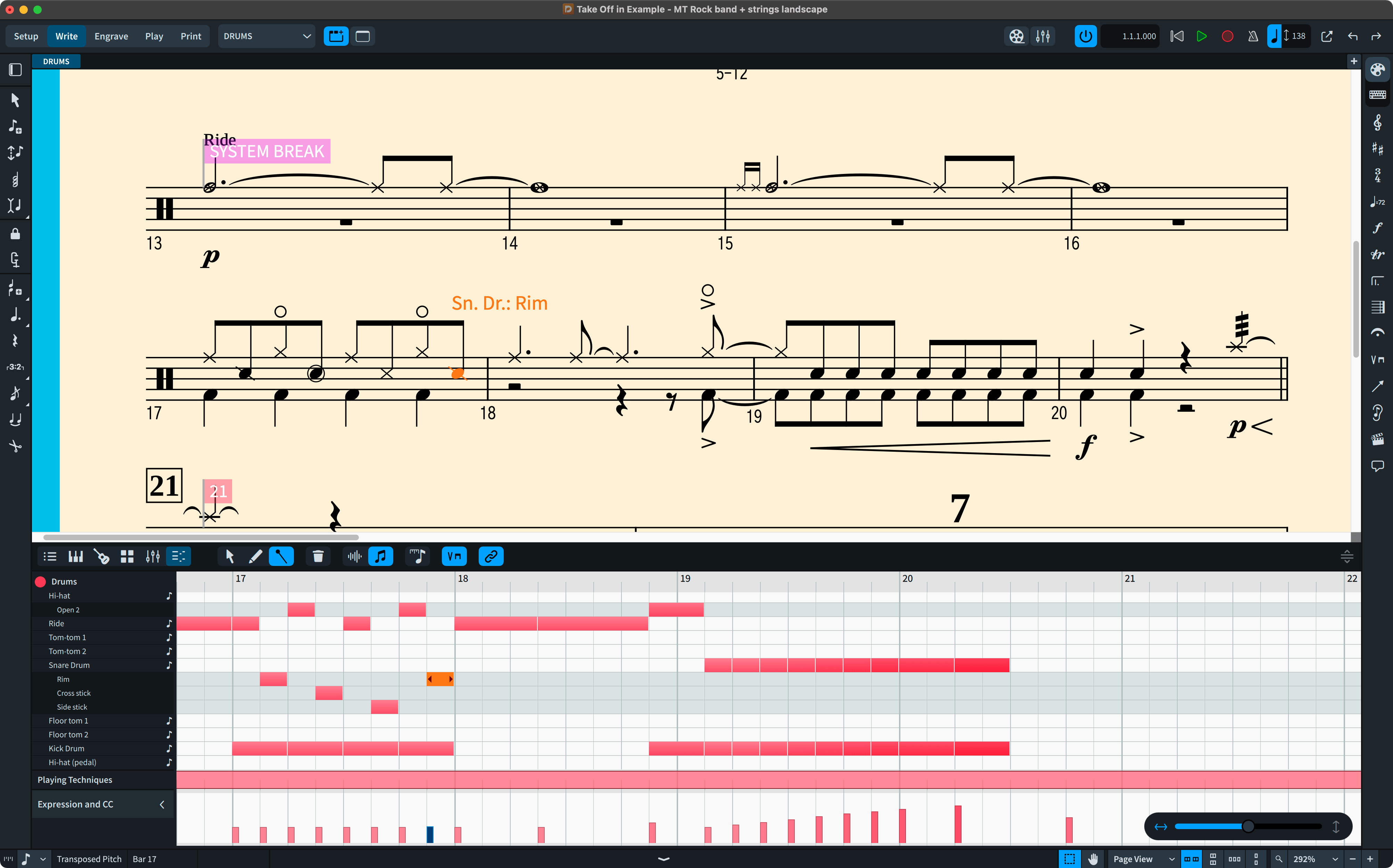 Percussion notation is its own world — and speaking as a former (dormant?) percussionist, I sympathize with anyone coming at this section of the band without the benefit of first-hand playing experience.

Fortunately, there are wonderful resources like Sam Solomon’s How to Write for Percussion that can help make sense of it all. But even if you understand percussion notation, there is still the matter of getting it into the software without feeling like you need an advanced degree specifically in this subject.

Dorico 4.2 makes it much easier to accomplish this task. I’ll quote extensively from the version history documentation here, and then sum it up with a couple of moving images that will tell the story.

It is possible to edit the music in the same ways as with the piano roll editor for pitched material, and notes can be freely moved both in time and between instruments or playing techniques, and their durations can be freely edited, according to the rhythmic grid.

In addition to the standard pencil/draw tool – which allows you to input notes one at a time by clicking to create a note of the current grid duration, then dragging to specify its duration – the percussion editor also includes a new drumstick tool, which can be used to input multiple notes with a single sweep of the mouse. When you activate the drumstick tool, each row in the percussion editor shows its own independent rhythmic grid control at the right-hand side of the instrument header, allowing you to specify a different grid value for each instrument. For example, you might specify a grid value of eighths (quavers) for the hi-hat and quarters (crotchets) for the kick and snare drum. With the drumstick active, click and drag across the percussion editor to create multiple notes of the specified grid duration. To remove individual notes, simply click them with the drumstick active. This is a very fast and efficient way of inputting percussion music.

In practice, here’s how easy it is to input some kick drum notes. I’ve decided to add eighth notes, then thought better of it, scaled it back and made them quarter notes. (If I intended quarter notes from the start, I could have simply adjusted the rhythmic grid in the lower left corner — slightly cut off in this screen recording — and dragged them in as quarter notes directly.)

That’s a great deal of fun already. But let’s say I wanted something a little fancier on the stick action:

As you can see, Dorico has a separate grid position for each type of snare drum hit that I might wish to use. I simply need to click in the Key Editor, and Dorico takes care of the rest — the correct position in the bar, the correct staff line or space, and the correct notehead style.

From a pure enjoyment perspective, it’s great fun. Far from being a cool toy, though, this new tool has the capability to make it much easier for composers and arrangers to write percussion notation that actually makes good sense and reflects their true musical intentions. Seeing it in the Key Editor is a very natural way to visualize what’s happening from an audio perspective, and then having it instantly and dynamically reflected in the notation is a one-two punch that delivers.

The way the Key Editor behaves in linked mode (the rightmost “link” icon shown) has been overhauled. Instead of automatically disengaging linked mode when you zoom or scroll in the Key Editor, or automatically changing the zoom level when you make a new selection, it now simply follows the selection that is made in the music area in Write mode, “as non-intrusively as possible”, according to Steinberg’s release notes. As Steinberg’s product marketing manager Daniel Spreadbury said in his post announcing the update, “after interviewing a number of heavy users of the Key Editor, it became clear that we needed to make some adjustments… our hope is that you will find this overall a much more comfortable way to work. Certainly our beta testers have found it to be a big improvement.”

In effect, what this means is that you should find that in most cases, there will be less disruption to what you see on the screen when working in this mode:

Together, the improvements in the Key Editor help us understand what Steinberg had in mind when they first embarked on this process beginning with the Dorico for iPad release last summer, and continuing through the first Dorico 4 release and subsequent updates. It’s worth the wait for what has evolved into a truly stellar feature of the software.

Various whitespace characters and the horizontal ellipsis character is now considered punctuation for the purposes of ignoring the width of hanging punctuation when aligning lyrics.

In Engraving Options > Lyrics > Spacing, the option to Ignore when positioning in Punctuation at the start or end of individual lyrics must be selected. 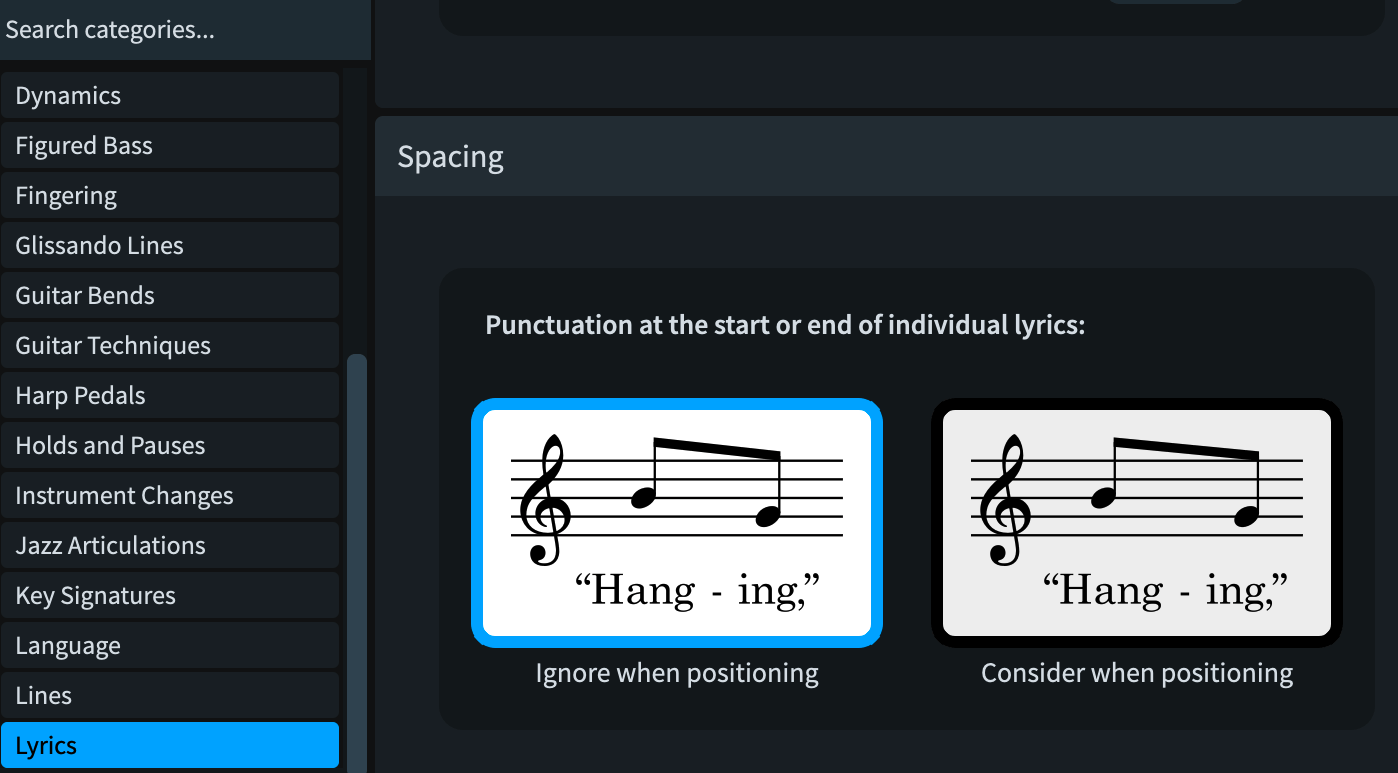 Dorico now uses the latest WinRT MIDI capabilities in Windows 10 and Windows 11 by default, which enables the use of MIDI devices that connect via Bluetooth as well as via USB.

When starting a new project based on a user project template from the Create New page of the Hub, it is no longer possible to override the music and text font settings from the project template. This ensures that the fonts in the created project match those that were originally set up in the template project.

Scoring Express users that encountered this issue will find that this improves the behavior of starting a project from a Scoring Express template and obtaining the desired settings in the new document.

Various other improvements and fixes across the program may be found in the version history documentation for this release.

We were on vacation last week, but the news of the music notation software world never stops. Dorico for iPad 2.4 was released on July 8, and it includes the percussion editor and addresses some of the issues some users have been experiencing with iCloud Drive. If you use Dorico for iPad and iCloud Drive, it is worth reading this article to understand what the solutions to the various issues are at this point in time.

If you’re already fully up to date with Dorico, this bit may not apply to you. But if you’ve got an earlier version of Dorico but haven’t updated to Dorico 4 yet, this is a good time to update.

Here are direct links to each of the deals:

We’ll do a slightly shameless self-plug at this time to advise that Notation Express and Notation Express XL have been completely re-written for Dorico 4 to take advantage of the direct connection of Stream Deck and Dorico via Remote Control. Further, the brand-new Scoring Express templates are designed expressly for Dorico 4.1 and higher, with support for updated lyrics and the Library Manager. So we certainly recommend updating to the latest version of Dorico if you haven’t already done so.

“We are continuing to work on Dorico 4, and we have one more update with significant functionality planned for the early autumn,” Daniel Spreadbury said. “With one very small exception, all of the functionality that was present in Dorico 3.5’s Play mode and piano roll editors has been reinstated in the Key Editor in Dorico 4, with a number of significant improvements already incorporated. We have made great strides with the functionality and usability of the new Key Editor, but there is still more work to do in polishing it and ensuring that it provides a really smooth and powerful workflow, and the next update will take it to the next level.”

It’s become somewhat customary for Daniel to tease a new feature upon the release of an update, and today’s update is no exception. He said, “We have also been working on a really great feature to help arrangers, which has been in the works now for a long time, and all being well we hope it will be included in the next update.”

Dorico 4.2 for Windows and Mac desktop is a free update for current registered users of Dorico Pro 4, Dorico Elements 4 and Dorico SE 4 users, and is available now via the Steinberg Download Assistant.

For full coverage of Dorico 4, please read our comprehensive review of 4.0, as well as our review of the Dorico 4.1 release. For even further reading, the 4.1.10, 4.0.10, 4.0.20 , and 4.0.30 updates, each of which contains important information, along with our coverage of Dorico for iPad, which has recently made a “lifetime unlock” option available.

Dorico 4.0.30 is out. It reinstates the tempo and MIDI pitch bend editors in Play mode, fixes a performance issue...