“Power play” Dorico users will be cheering this update for a few reasons, chief among them the return of the very handy tempo editor and MIDI pitch bend editor in Play mode. If you were accustomed to using these tools in previous versions of Dorico, you will have noticed they were gone in Dorico 4.0, where the interface was significantly reworked to align with the iPad version, and thus these editors went missing for a time. They triumphantly return in Dorico 4.0.30, and are as useful as ever. However, the dynamics editor, semantic pitch bend editor, and the drum editor are not included in this release, and are planned for a future update.

There is also an important fix for users who have many VST plug-ins installed on their system, in that Dorico no longer needlessly rebuilds the lists of plug-ins that appear in the Mixer and in the VST Rack in Play mode after every edit to the score.

A few engraving improvements are in this release as well in the areas of barlines, staff labels, and chord diagrams.

The version history documentation for this release thoroughly documents the improvements as well as the bug fixes.

Dorico for iPad has not been updated with today’s release; the update to that app will come separately, later.

Here’s what’s new in Dorico 4.0.30, as provided by Steinberg (images from Scoring Notes):

Editing tempo is much the same as in Dorico 3.5: you can use the Draw and Line tools to add immediate and gradual tempo changes respectively. Tempo changes that you add in Play mode appear in Write mode as signposts, and can be shown for printing via the Properties panel if need be.

List view. The Open Recent page of the Hub now supports a list view in addition to the familiar grid view: simply choose your preferred view type using the buttons on the right-hand side of the window.

Keyboard access. You can now use ↑/↓ to move through the grid or list of recent projects, and hit Return or Enter to open the highlighted project.

Learn updates. When the Hub first appears after starting Dorico, the Learn button will now show a red badge to indicate that new items have been added to the Videos or Dorico blog feeds on the Learn page; when you click the Learn button, the badge will disappear.

Start repeat barlines at the start of the system. When you have a start repeat barline that coincides with the start of a system, you may wish the barline at the end of the previous system to be shown either as a normal barline or a double barline; an option to control this has long been found in the Repeats section of the Barlines page of Engraving Options. However, such an option always applies to the whole project, which may or may not be appropriate.

Therefore, a new property Barline at end of system has been added to the Time Signatures group in the Properties panel, which appears only when a start repeat barline is selected; this allows you to specify what kind of barline should appear at the end of the previous system.

The same property can also be used to override the barline shown when a change of key signature and a start repeat barline coincide: by default, Dorico shows a double barline to the left of the key change, then the start repeat barline. If you want to show a different barline instead, activate Barline at end of system and choose the desired barline type. 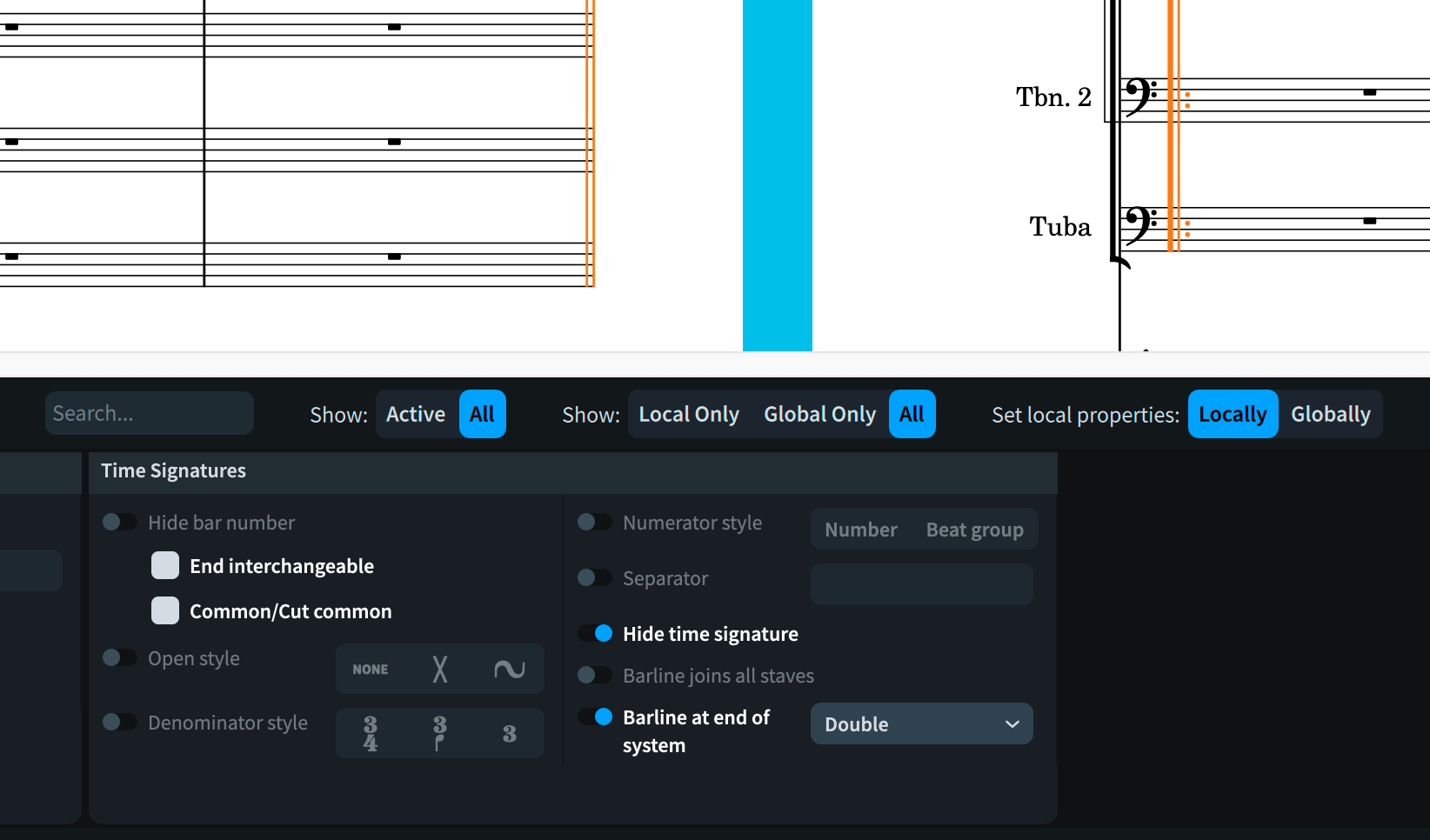 Properties. When selecting an item as part of a cue in Engrave mode, the Properties panel now hides any global properties so that you cannot inadvertently change the appearance of the source material by setting properties in another layout.

Periods after abbreviated instrument names. There are different conventions for whether or not an abbreviated word should be indicated by appending a period (full stop): some publishers always indicate an abbreviation by appending a period, while others only append a period when the last letter of the abbreviation is not the last letter of the full word. Dorico has always followed this latter convention, until now.

In his blog post today announcing the update, Steinberg product marketing manager Daniel Spreadbury said, “We had hoped to have another update to Dorico for iPad ready to go today as well, but due to some unforeseen technical difficulties that release has been delayed, though we hope not for long. This release will include support for Open in Place, which means that it will be possible to open Dorico projects directly from iCloud Drive, Dropbox, OneDrive, or other cloud storage apps, and save those projects directly back to those locations. It will no longer be necessary to use the Share button on the toolbar to export the project back to that location. This should make it much more convenient to work with projects across multiple devices.”

Future plans include the remaining missing editors in the new Key Editor, together with some further improvements to the user experience of the new tools.

Further, he said, “we also anticipate adding iCloud support to both Dorico for macOS and Dorico for iPad.”

Dorico 4.0.30 for Windows and Mac desktop is a free update for current registered users of Dorico Pro 4, Dorico Elements 4 and Dorico SE 4 users, and is available now via the Steinberg Download Assistant.

For full coverage of Dorico 4, please read our comprehensive review, as well as our coverage of the subsequent 4.0.10 and 4.0.20 updates. For the latest information about compatibility for Finale, Sibelius, Dorico, and MuseScore, as well as links to the latest news and reviews about product releases, please see the Scoring Notes Product Guide.